A MYSTERY GHARIAL FROM AUSTRALIA? 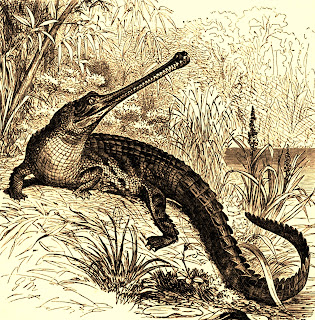 The most distinctive, readily identifiable species of crocodilian alive today is the gharial or gavial Gavialis gangeticus, due to its exceedingly long, slender jaws and its very sizeable total length (a few specimens exceeding 20 ft have been confirmed; only the estuarine crocodile is longer). However, the gharial is confined entirely to the Indian subcontinent. Nothing like it has ever been recorded from modern-day Australia – officially...

The huge estuarine or saltwater crocodile (up to 20 ft long, sometimes slightly more), and the smaller freshwater or Johnston's crocodile Crocodylus johnstoni are the only two species of crocodile known to exist in Australia today. However, Australian herpetologist Richard Wells has informed me that when he lived in the Northern Territory during the early 2000s, he received a number of consistent reports from a variety of independent informants, including aboriginals, old ex-crocodile hunters, and fish poachers, suggesting that the tidal parts of its Mary River system was home to a third, very large but dramatically different crocodilian that is apparently unidentified by science. 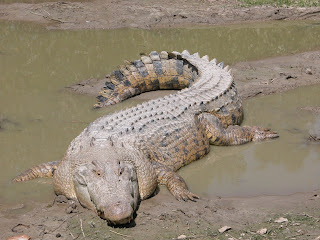 According to Wells's data, kindly shared by him with me:

[it] would appear to be totally aquatic with an elongated jaw with numerous exposed teeth more in keeping with that of some kind of gharial (Gavialis) – but it appears to reach a larger size, has paddle-like limbs, and is of nocturnal behaviour. Most reports of the creature have been dismissed as representing sawfish or crocodiles, but all the people who reported it were very familiar with sawfish and crocs, but were adamant that it is some sort of crocodile-like reptile and it scared the hell [out] of them. 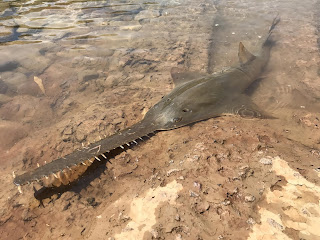 So what could this gharial lookalike be? Interestingly, crocodiles in zoos that have been fed a low-protein diet sometimes develop exposed teeth that jut out laterally from the jaws. So could the Mary River mystery crocodile simply constitute size-exaggerated freak specimens of one or other of Australia's two known species?

Worth noting is that Johnston's crocodile does possess a rather long, superficially gharial-like snout. But this does not explain the paddle-like limbs cited for the Mary River beast (thus rendering the already-improbable possibility of an undiscovered population of bona fide gharials existing here even more improbable).

Intrigued by this cryptid, I contacted Australian reptile palaeontologist Dr Ralph Molnar for his views, and he aired a thought that had occurred to me too. Namely, that a paddle-limbed crocodilian instantly recalls the thalattosuchians or sea crocodiles.

Thalattosuchians constituted a prehistoric group of highly-specialised, elongate-bodied, and wholly-aquatic marine reptiles related to true crocodilians and superficially similar to them too. As they lacked the osteoderms of true crocodilians, however, they were smooth-skinned. In addition, they possessed flippers as limbs instead of claw-footed legs, and probably bore a distinctive tail fin. Yet despite being well-adapted for their maritime lifestyle, they were a relatively short-lived group, and vanished from the known fossil record over 120 million years ago. 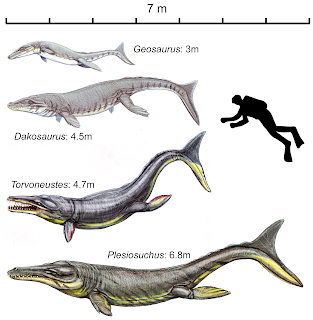 But could it be that a lineage of thalattosuchians has somehow survived into the present day, undetected by science and only subtly changed from those ancient times? It seems highly unlikely, and yet it would not be the first time that the existence of a 'living fossil' (or Lazarus taxon) has been confirmed.

A much more conservative, alternative option, but still involving prehistoric survival, hinges upon whether the eyewitnesses' claims that the Mary River crocodile's feet are paddled are strictly accurate. Could they simply be more rounded than those of Australia's pair of known crocodile species? For if they are not truly paddled, a very remarkable identity for the Mary River crocodile, as noted by Dr Molnar, becomes available for consideration.

Less than two million years ago, a very gharial-like Pleistocene species known as the Murua crocodile, and variously dubbed Gavialis or Ikanogavialis papuensis, inhabited Murua (aka Muyua and Woodlark Island) and the Solomon Sea surrounding it, just above southeastern New Guinea, and therefore in close proximity to the waters off Australia's Northern Territory. In the past, some authorities were more in favour of classifying this 7-10-ft-long species as a thoracosaur (prehistoric reptiles that may or may not have even been crocodilian in identity). Yet whereas initially sceptical, Molnar subsequently informed me that it might well have been a species of gharial (although he believed that it was distinct from the genus Gavialis). Certainly, its elongated snout was very like the latter's, as was its piscivorous diet, and nowadays it is indeed housed within the gharial's taxonomic family (but delineated by some workers within the genus Ikanogavialis rather than Gavialis). Moreover, it appeared to have been a fully marine gharial, thereby making it the most geologically-recent marine crocodilian currently known to science. In 1982, Molnar documented this intriguing species within a Memoirs of the Queensland Museum paper.

Based upon what is known of its morphology from fossil evidence, the Murua crocodile would correspond very closely indeed with the Mary River's mystery reptile, though it was smaller than the latter cryptid is said to be (but as noted earlier here, this greater size may simply be a product of exaggeration or poor estimation on the part of eyewitnesses). Some reptilian authorities have suggested that the Murua crocodile may have survived beyond the Pleistocene, perhaps until as recently as the late Holocene, but in view of Wells's reports it may actually still exist today. If there really is a marine gharial species awaiting scientific discovery in the tidal portion of Australia's Mary River system, let us hope that a day will come when the remains of one of the latter's mystery crocodiles will be found and its taxonomic identity finally revealed.

This ShukerNature blog article is extracted and updated from my books Mirabilis: A Carnival of Cryptozoology and Unnatural History and Still In Search Of Prehistoric Survivors: The Creatures That Time Forgot?. 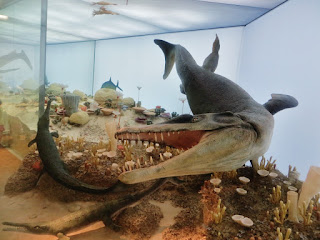