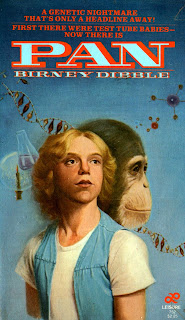 This is the paperback First Edition (not sure if there was ever a hardback First Edition) of Pan (© Birney Dibble/Leisure Books, of Nordon Publications: New York, 1980 – reproduced here on a strictly non-commercial Fair Use basis for educational/review purposes only)

Over the years there have been many claims that scientific attempts have been made to create human-ape hybrids, especially so-called humanzees (human x chimpanzee hybrids), but no such forms have ever been confirmed (as I document fully here, even the enigmatic bipedal entity Oliver was conclusively revealed to be a pure-bred chimpanzee). I purchased and first read this unusual science fiction novel exploring the humanzee theme back in the early 1980s as a university student, but today no-one I've spoken to seems even to have heard of it, so here is a short ShukerNature review of Pan.

Written by American surgeon and novelist Birney Dibble and first published in 1980, Pan tells the harrowing and ultimately tragic story of the world's first chimpanzee-human hybrid, created by a wholly unscrupulous rebel scientist, John Reynolds. Assisted by his weak, acquiescent wife, Sylvia, Reynolds stops at nothing, including kidnap, imprisonment, and murder, to achieve his obsessive, Frankensteinian objective.

His goal? By raising this unique entity, whom he names Pan, as if he were his son, Reynolds hopes to divine and thence unlock the hitherto arcane secrets of what truly makes a human human, and ultimately to be the first scientist to discover, by conversing in depth with Pan once mature, how the fusion of human and ape manifests within his mental and physical development.

The reality? Something very different, much darker, and so devastatingly disappointing to Reynolds that his entire world is destroyed, and Pan's transformed out of all recognition, on that fateful day when Reynolds and Sylvia finally reveal to Pan who – and what – he really is. The official blurb for Pan is as follows:

Science created him, mankind rejected him!

He was the first of a totally new species, the result of a unique scientific experiment. Half-man, half-beast, he inhabited a world of shadows, torn between his human and animal natures. The conflict within him threatened not only the success of the experiment, but Pan's own life, and the life of the one person who cared about him!

In this novel, Pan is named after the demi-god Pan from classical Greek mythology, the mercurial deity of Nature who was himself half-human, half-beast, and he becomes just as skilful musically as was his legendary namesake, after whom panpipes are named.

Interestingly, Pan is one of three different novels dealing with artificially-created ape-human hybrids that were all published within a relatively space of time, but each took this basic theme along a very different pathway from the other two.

One of these other two was Chimera by English screenwriter/novelist Steven Gallagher, published in 1982, which I've read and enjoyed. It was subsequently converted into an equally thrilling, and chilling, British TV mini-series of the same title (but retitled Monkey Boy for the American market), produced by Anglia TV for ITV and first screened in 1991, which I have lately purchased on DVD. In this two-part show, the laboratory-created hybrid, named Chad, has been produced by genetic engineering at a top-secret governmental establishment, but his behaviour becomes increasingly unstable as he grows older, and he finally escapes, to wreak mayhem and murder in the outside world as his creators frantically seek to recapture him.

Sometimes confused with Chimera by present-day TV enthusiasts is another, slightly earlier but less famous British TV mini-series, this time produced by the BBC, originally screened in 1988, and entitled First Born. Consisting of three episodes, it stars Charles Dance as the rebel scientist figure, a genetic researcher named Edward Forester, who produces a male human-gorilla hybrid. However, his attempts to surreptitiously rear his creation, whom he names Gor, have horrifying unforeseen consequences. Again, I have this series on DVD, but unlike Chimera I have not as yet read the novel that inspired it – Gor Saga, written by English novelist/playwright/poet Maureen Duffy, published in 1981, and adapted for the TV mini-series by Ted Whitehead. 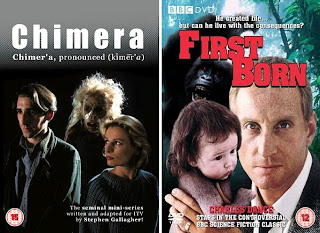