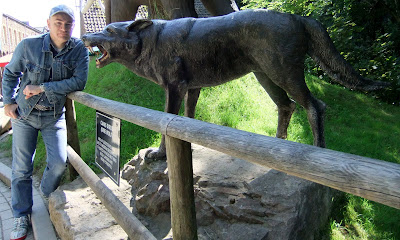 One of many in-progress projects of mine is a canine companion of sorts to my very first book, Mystery Cats of the World, though the dog version will also document paranormal canine entities, whereas the cat book concentrated entirely on cryptozoological beasts. Here are some of the intriguing North American examples that will appear in the dog book, and if anyone has additional information on these or any others like them, I'd love to receive details!

The Omer Plains constitute a wild, uninhabited area of swampland and scrubby pines, situated just a few km west of the small Michigan town of Omer. Since time immemorial, native Chippewa legend has claimed that this locality is haunted by a pack of invisible but highly aggressive spirit dogs known as witchie wolves, said to guard ferociously the graves of ancient warriors. In more recent times, however, it has become the focus of a teenage rite of passage, in which youths from the local high school drive out at night in their cars to the Omer Plains, and, if brave enough, step outside to confront its zooform inhabitants. According to David Kulczyk, who first brought the witchie wolves to widespread attention during the mid-1990s, he has spoken to several ‘tough-guy’ youths who have wept out loud when recalling their experiences there – telling of how they were knocked violently to the ground and assailed by what seemed to be an invisible wolf or dog snarling and snapping at their heads. Kulczyk also claims to have seen scratches and dents in cars alleged by their frightened owners to be the result of an attack in the Omer Plains area by witchie wolves.

Very different, but no less preternatural, it would seem, is the medicine wolf of New Mexico. According to cryptozoological investigator Nick Sucik, this is a very large, all-white wolf with long shaggy fur, plus a very large chest, and a somewhat long snout and body. The local Apache people claim that the medicine wolf is very special, so much so that it can only be seen by certain gifted persons, remaining invisible to everyone else. It might be easy to dismiss this as wholly mythical – except for the remarkable fact that late one evening during the summer of 1979, a trucker driving along the road leading to a small valley near Dulce, New Mexico, saw a mysterious creature that precisely fitted the above description of the medicine wolf. Lit by his truck’s headlights, the animal came quickly out of some brush and paused briefly in the middle of the road, before swiftly moving away again and vanishing into the darkness on the other side. When the trucker recounted his sighting to the local Apaches, they had no doubt whatsoever about what he had encountered, and he remains adamant that he did indeed see the creature.

Speaking of great white wolves: this is an alternative name for a very mystifying, and formidable, canine cryptid also called the waheela, which is reputed to exist in the snow-covered tundra terrain of northern Michigan, northern Alaska, and the Northwest Territories of Canada. First brought to attention by American cryptozoologist Ivan Sanderson during the mid-1970s, it is said to resemble a huge all-white wolf, but with extremely dense, shaggy fur; proportionately shorter limbs than those of normal wolves (but with longer forelimbs than hind limbs); feet that are noticeably splayed, yielding wolf-shaped tracks but much bigger than those generally left by wolves; a markedly large, broad head, but only tiny ears; and a very thick tail. Moreover, whereas typical wolves hunt in packs, the waheela allegedly hunts alone.

According to Sanderson, one of his hunter friends shot twice at just such a creature encountered while tracking in the Nahanni Valley of Canada’s Northwest Territories during the 1940s or 1950s, but such was the thickness of the animal’s fur that his shots had no effect, and it simply moved away. There have also been claims that waheelas may explain the grisly discoveries of various headless bodies of prospectors in this same region down through the years.

Sanderson boldly speculated that perhaps the waheela was more than just an unusual wolf with solitary behaviour, proposing that it might actually be a surviving amphicyonid (though, confusingly, he referred to it as a dire wolf Canis dirus, which was not an amphicyonid but a true canid, from the Pleistocene, related to but larger than the present-day grey wolf C. lupus). Also known as dog-bears, these huge burly carnivores, distinct from both dogs and bears, officially became extinct around 5 million years ago in North America, and eventually died out everywhere else too, not persisting into the modern age. Could it be, however, as hypothesised by Sanderson, that in the bleak arctic wastelands of northernmost North America, an amphicyonid lineage has indeed survived, only rarely encountered by humans and therefore seldom threatened by hunters? A more recent, less dramatic, but no less interesting suggestion is that the waheela may be a thriving representative of a supposedly-extinct, local wolf form native to Alaska that belonged to the modern-day wolf species, C. lupus, but displayed certain morphological differences from other wolves – differences that just so happen to correspond well with descriptions of the waheela.

Interestingly, huge white wolf-like beasts have also been reported from Greenland, where they are known as the amarok. Zoologists traditionally dismissed such accounts as Inuit folklore, until an amarok was shot during the 19th Century and found to be a truly immense pure-white wolf. Its magnificent pelt was subsequently sent to Denmark’s Copenhagen Museum.
Posted by Dr Karl Shuker at 23:04