NEVER TANGLE WITH A TYGOMELIA - OR TANGO WITH A TOKANDIA! 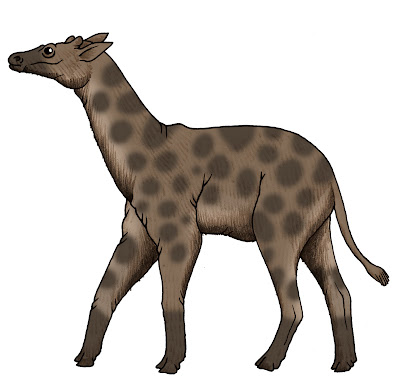 Having taken many years to summon up enough courage to air in public this particular post's alliterative extravaganza of a title, I now have to justify it - so here goes!

For every Nessie, bigfoot, Beast of Exmoor, yeti, or Mongolian death worm, there is a veritable host of other, far less familiar mystery beasts on record - elusive creatures that have been all but forgotten even by the cryptozoological cognoscenti, let alone by mainstream scientists. Consequently, I am using this post to spotlight three of my particular favourites from this forgotten company of cryptids - a unique trio of weird but very wonderful examples that appear somehow to have slipped through the cracks between the paving stones of cryptozoological prominence, and have descended ignominiously into the dark realms of scientific obscurity.


TYGOMELIA – A GIRAFFE IN MOOSE’S ANTLERS?

One of the most incredible of putative crypto-crossbreeds made its media debut in an Ottawa Times newspaper article of 22 November 1870, after which it vanished from the headlines as swiftly as it had entered them:

"Sir John E. Packenham, an officer in the English army, who has been spending the last year in her Majesty's northern provinces, arrived at Fort Buford [in North Dakota] with an animal of rare beauty, and never before caught on this continent, nor has it been known till late years that the species existed in this country. It is of the same family as the giraffe, or camelopard, of Africa, and is known to naturalists as the tygomelia. They are known to inhabit the high table lands of Cashmere and Hindoo Kush, but are more frequently seen on the high peaks of the Himalaya Mountains. The animal was taken when quite young, and is thoroughly domesticated, and follows its keeper like a dog. It is only four months old, and ordinarily stands about five feet high, but is capable of raising its head two feet, which makes the animal seven feet when standing erect. It is of a dark brown mouse color, large projecting eyes, with slight indications of horns growing out. The wonderful animal was caught north of Lake Athabasca, on the water of the McKenzie's River. It has a craw similar to the pelican, by which means it can carry subsistence for several days. It was very fleet, being able to outfoot the fastest horse in the country. The black dapper spots on the rich brown color make it one of the most beautiful animals in existence, more beautiful than the leopard of the Chinese jungle. Sir John did not consider it safe to transport this pet by water down the Mississippi River, fearing the uncertain navigation and the great change of climate from the Manitoba to the sunny south. He has, therefore, wisely concluded to go by way of St. Paul, Minnesota. The commander of Fort Buford furnishes him with an escort for the trip. He will then proceed through Canada to Montreal, where he will ship his cargo to England. "
In reality, no such beast is known from India or North America (or, indeed, from anywhere else!). Moreover, the only plausible suggestion regarding its identity that has been offered to date (always assuming, of course, that the report was not a journalistic spoof) is one suggested by Edmonton-based cryptid investigator Kevin Stewart. Namely, that this ‘tygomelia’ was a young, freakishly-mottled moose Alces alces (such specimens have occasionally been documented in the wild). But with no images or further accounts of it known to exist, there is little likelihood that we shall ever know for sure. 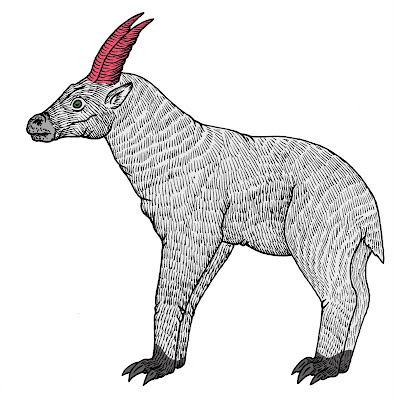 A comparably curious mystery beast was the snowy-furred, rose-horned, goat-like creature constantly seen in the company of a Comanche woman visiting the town of Fredericksburg, Texas, during the first half of the 19th Century. What made it much more intriguing, zoologically speaking, than any goat, however, was its size – no bigger than a cat – and, remarkably, the fact that its feet were clawed, not hoofed.

According to the Abbé Emanuel Domenech, a Texas missionary who documented this walking wonder in his book Missionary Adventures in Texas and Mexico (1858), an American officer, who had told him about the woman’s strange pet, had offered her 500 francs for it. However, she would not sell it to him or to others who had also offered riches, stating that she knew of a wood where these animals lived in abundance. She promised that if she ever returned she would catch some for them, but apparently she never did return.

As this odd little animal inexplicably combines the horns of an ungulate (hoofed) mammal with the claws of a non-ungulate, its identity is certainly mystifying. True, a few fossil ungulate forms with claws instead of hooves are known from the palaeontological record, including chalicotheres and certain notoungulates, but these all died out long ago – didn’t they?


TOKANDIA – A LOST GIANT FROM MADAGASCAR

Madagascar is unquestionably the kingdom of the lemurs, with approximately 100 species currently known and new ones still being discovered here on a regular basis. A mere millennium ago, however, there were even more – and some of them were quite enormous, far bigger than any species known to exist today. Officially, these mega-lemurs are long extinct, but native Malagasy folklore and superstition include accounts of various monsters that bear more than a passing resemblance to certain of these ‘lost’ giants. A case in point is the tokandia.

According to local legends, this supposedly mythical, largely terrestrial beast was as big as a bear, and moved on the ground via a dancing series of bounding leaps, but would also on occasion jump into the trees and spend time there. Although not man-like in form, it was said to utter very man-like cries. Is it just a coincidence that the only known fossil creature recorded anywhere in the world that closely resembles the tokandia’s description both in form and in predicted behaviour just so happens to be the koala lemur Megaladapis edwardsi - a huge semi-terrestrial Madagascan species weighing around 75 kg, and known to have still existed here as recently as 1500 AD? Perhaps a few reclusive individuals survived even later, inspiring the legends of the tangoing tokandia. 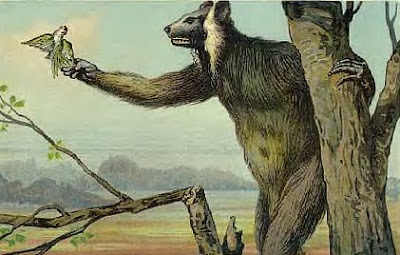 A 19th-Century engraving of Megaladapis - identity of the tokandia?
Posted by Dr Karl Shuker at 19:39