THE GAME OF THE NAME! 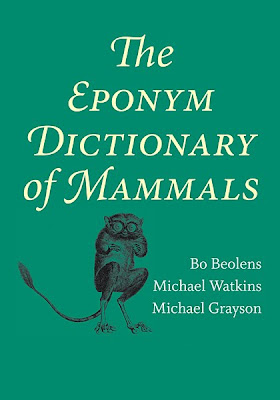 THE EPONYM DICTIONARY OF MAMMALS
BY BO BEOLENS, MICHAEL WATKINS, AND MICHAEL GRAYSON


Anyone with a decent knowledge of natural history will know something of Przewalski’s horse, Père David’s deer, De Brazza’s monkey, Grevy’s zebra, Grant’s gazelle, Lumholtz’s tree kangaroo, and Daubenton’s bat. But have you ever wondered who, exactly, were the people commemorated in these creatures’ names? I know I have – but not any longer. Now, thanks to this thoroughly absorbing, extremely informative, and eminently readable book, the identities and histories of these disparate and often-forgotten figures united by nomenclatural immortality are fully revealed at last.

In what must have been an exhausting as well as an exhaustive amount of research, Beolens, Watkins, and Grayson have compiled an alphabetically-arranged and assuredly-definitive listing of every person (even including fictitious entities such as mythological deities) whose own name has been linked to that of a mammalian species or subspecies, either via the latter creature’s vernacular name or via its scientific binomial name. Over 2000 different mammalian species names are covered in total, and in addition there are two extensive appendices of vernacular names and scientific names. But that is still not all.

For each person documented in this book, a list of the mammals bearing their name is provided (which includes the authors and publication years of the papers in which those mammals were formally described), plus a concise biography containing the person’s years of birth and death, and details of their major scientific contributions, as well as the respective zoogeographical distributions of their eponymous mammals.

So now I know, for instance, that de Brazza was Jacques (aka Giacomo) C. Savorgnan de Brazza (1859-1888) - the younger brother of an Italian count, and that together they explored what was then the French Congo, amassing important collections of natural history specimens; that Przewalkski was General Nikolai Mikhailovitch Przewalkski (1839-1888) - a highly successful Russian Cossack explorer whose expeditions charted great swathes of Central Asia for the very first time; and that Daubenton was Dr Louis Jean-Marie d’Aubenton (1716-1800) – a French naturalist who was something of a biological Renaissance man, so diverse and numerous were his fields of expertise in the natural sciences.

What I found particularly enjoyable, however, is that in addition to these worthy, mainstream items of data, this comprehensive book is generously peppered with all manner of tantalising, fascinating trivia unlikely to be encountered so readily anywhere else. Who could have ever suspected, for example, that English mammalogist Oldfield Thomas described no fewer than 2900 (!) genera, species, and races of mammals, then, sadly, committed suicide while still in the prime of his career? How many more new mammals might he have gone on to describe, one wonders, had his life not ended so abruptly and tragically? Did you know that Xantippe’s shrew Crocidura xantippe was not so named in order to honour Socrates’s wife, but rather because she was reputed to be of very shrewish temperament! Or that Russian zoologist Peter Simon Pallas, after whom Pallas’s cat Felis manul and six other mammals are named, also discovered a new type of meteorite, which was duly dubbed pallasite in his honour? And yes, Cleese’s woolly lemur Avahi cleesei, scientifically described as recently as 2005, is indeed named after British comedy actor John Cleese, most famous for his ‘Ministry of Silly Walks’ sketch in the anarchic Monty Python’s Flying Circus television series (though as far as I am aware, this lemur’s own mode of locomotion is reassuringly normal!).

It is often looked upon as de rigueur for a reviewer to find something – anything - however trivial, to criticise when perusing a major new contribution to the relevant literature, which this present book definitely is as far as zoology is concerned. In all honesty, however, I cannot find any fault worthy of mention here. The book is scrupulously well-written, researched, and presented. Moreover, its contents guarantee that never again will a mammalian eponym pose a mystery, and will also provide countless hours of entertaining, educational browsing. What more could one ask for? Perhaps, just one little thing...

One of the world’s largest yet most bizarre rodents is the African crested rat Lophiomys imhausi, whose affinities to all other rodents are so contentious that many mammalogists prefer to house it in its own taxonomic family. But who was Imhaus, after whom this decidedly strange creature was named? Many years ago, while researching the history of its scientific discovery for one of my own books, I sought long and hard for information concerning the shadowy Imhaus, but was unable to uncover anything. Now, armed with this present volume, I felt certain that my quest for his identity would finally be over – but no! Not even the indefatigable Beolens, Watkins, and Grayson have been able to trace this most elusive of eponym originators. Instead, leaving his dates of birth and death blank, and providing no first names for him either, they confess that apart from the fact that Imhaus had purchased a specimen of this rat’s skull, “...nothing more seems to be known about him”.

What a strange – and rather sad - epitaph for a life, surely, to be remembered only for having once encountered an odd-looking rat. 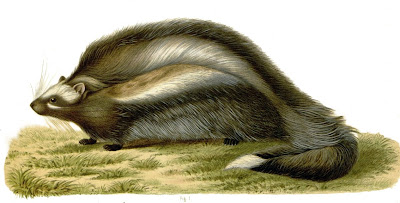