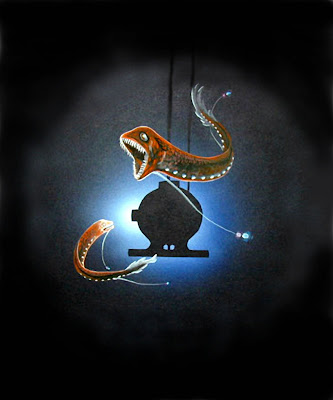 One of the 20th Century's most mysterious ichthyological discoveries was a remarkable deepsea fish that was officially described and named in 1932, yet which has never been examined in the flesh and has no known representative in any of the world's museums.

On 22 November 1932, Bermuda-based zoologist Dr William Beebe was 2100 ft beneath the surface of the sea in a bathysphere, sited 5 miles southeast of Bermuda's Nonsuch Island. While he was observing the denizens of the deep passing by the bathysphere's windows, two very unusual fishes became illuminated in the craft's electric beam of light as they twice swam past it, no more than 8 ft away. Their long slender bodies, each of which was at least 6 ft long with strongly undershot jaws housing numerous teeth, reminded Beebe of barracudas, but running along either side of each fish was a single, laterally-sited, horizontal row of luminous organs (photophores), little short of twenty in total, and every one emitting a powerful pale blue light.

From these fishes' general morphology, Beebe concluded that their species was most probably allied to the melanostomiatids, popularly known as the scaleless black dragon fishes. However, its single line of lateral photophores, not to mention its pair of ventral tentacles with light-emitting terminal organs, unequivocally distinguished it from any known species within that family. As a result, Beebe christened his mystifying discovery Bathysphaera intacta ('untouchable bathysphere fish'), sole member of a new genus. 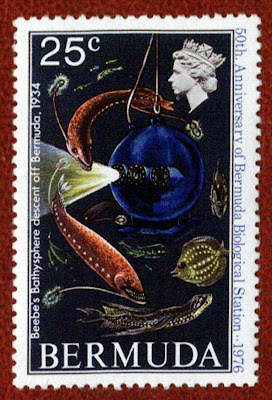 Bathysphaera was not the only hitherto unknown species of deepsea fish that Beebe discovered and named, but was unable to capture, during his Bermudan bathysphere observations in the early 1930s. He spied a mysterious, 2-ft-long, torpedo-shaped fish at depths of 1500 ft and 2500 ft, and named this grey-coloured species the pallid sailfin Bathyembrix istiophasma. He also described the three-starred angler fish Bathyceratias trilychnus, a 6-in-long species sighted at 2470 ft, bearing three 'fishing rod' structures (illicia) on its head, and clearly allied to the deepsea angler fishes (ceratioids); as well as the five-lined constellation fish Bathysidus pentagrammus, spotted at a depth of 1900 ft and resembling a Chaetodon butterfly fish or an Acanthurus surgeon fish, but exquisitely decorated with five glowing lines of yellow and purple photophores on each side of its roundish body.

Just as beautiful was a long-beaked multicoloured fish with scarlet head, blue body, and yellow tail that Beebe informally named the abyssal rainbow gar - four of which he observed swimming together in a stiff, almost upright posture at a depth of 2500 ft.

No specimens of any of these 'untouchable' species have so far been obtained. Consequently, as with Bathysphaera, and assuming that Beebe's testimony was truthful, they are secrets of the sea that were revealed to humanity only briefly before disappearing back into its depths' dark and alien anonymity. 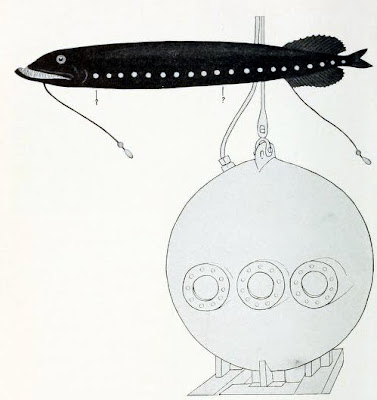 The bathysphere fish, depicted in William Beebe's book, Half Mile Down (1934)

This is an excerpt from my book The Encyclopaedia of New and Rediscovered Animals (Coachwhip: Landisville, 2012), which is the fully-updated, thoroughly-revised, and greatly-expanded third edition of The Lost Ark.