A MYSTERY PAINTING NO LONGER. 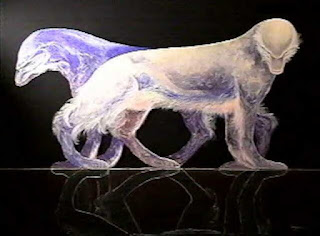 Remember this painting, created by a mysterious artist known only as Canzanella, depicting two equally mystifying creatures, and sold as a 'cryptozoological painting' back in September 2002 on eBay? Reviving my investigations into it, I blogged about it here on ShukerNature twice in October 2009 after having first introduced it to the cryptozoological community via an Alien Zoo column back in the December 2002 issue of Fortean Times? What were the animals, and who is/was Canzanella?


Now, after a long history of bafflement, this mystery painting is a mystery no longer. Over the years, I had sent a number of enquiries via eBay’s communication system to the painting’s seller, but I had never received a response. In early April 2010, however, I succeeded in tracing the seller’s email address (not visible on eBay), so I then tried emailing this person directly - and, to my great delight, on 10 April I finally received a reply! The seller proved to be a lady artist from Florida called Stephanie Sparkman, and in just a few lines she successfully cleared up all of the longstanding mysteries surrounding this painting and its subjects:

"I painted the picture over 28 years ago myself. It is a representation of what I felt the porpoise of today used to look like as a land animal. First the fur stage, then to smooth skin as shown in the beast behind the one in the foreground. I have NO recall of how much I got for the picture (for sure not enough as it was exceedingly detailed with hairs on the hairs [and] with several different colours on each hair) and didn't even recall what had become of it as I was looking for it not too long ago and forgot what I had done!!! Thanks to you I know what happened to it LOL.

"...[Canzanella] was my maiden name as I kept the name of my late husband which is Sparkman but always painted under my maiden name to give credit where credit was due."

So the seller and the artist were one and the same person, and the animals were her own concept of what the porpoise’s erstwhile land ancestors may have looked like. It had taken almost eight years but Canzanella’s perfect picture of mystery had finally been solved, thanks to none other than the hitherto-elusive Canzanella herself!