MESMERISING MUSTELIDS AND THE DANCE OF DEATH 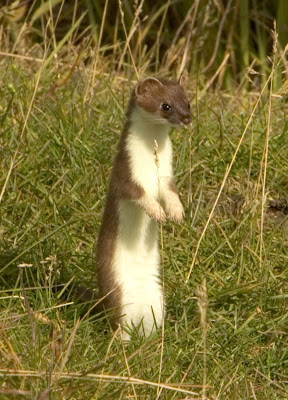 
I was recently asked whether stoats perform a kind of dance to mesmerise rabbits so that they can approach for the kill. This subject has long interested me, so much so that I included the following section on it in my book The Hidden Powers of Animals (Marshall Editions: London, 2001):

"Certain carnivorous mammals, notably mustelids (such as stoats, weasels, and martens), but also foxes, have been observed indulging in a bizarre activity known as the dance of death. In March 2000, for example, David Speight from Bakewell, Derbyshire, reported encountering a stoat Mustela erminea following a squirrel during a spring hailstorm. But instead of pursuing it normally, the stoat was engaging in an extraordinary display of chasing its tail and performing several sideways leaps, before finally disappearing into a hedge. As noted by mammalogist Nigel Dunstone, this strange behaviour seemingly mesmerises a potential prey victim, and during the dance the stoat edges ever closer to it until it suddenly seizes its unwary victim - though in the case recalled by Speight, the squirrel apparently proved immune to the stoat's dance.

"Not so, however, on the occasion of 3 February 1919, when Albert Rowland of West Green, Hampshire, observed a weasel Mustela nivalis capering and circling in the snow while a rook sat nearby and watched. Throughout its giddy performance, the weasel was gradually moving closer and closer to the rook, until it abruptly sprang at the bird. It missed, but, undaunted, it repeated the procedure several times. Yet, remarkably, the rook never attempted to fly off, and eventually the weasel succeeded in grasping it by the throat.

"Foxes have frequently been spied engaging in similar activity with rabbits and rodents - a phenomenon popularly referred to as fox charming. As with mustelids, the fox performs a frenetic dance around its intended prey, which sits passively, seemingly stupefied and unaware of the danger - until, without warning, the fox pounces upon it.

"Scientific opinion remains divided as to whether the death dance is a voluntary or involuntary performance. It is now well known that the nasal sinuses of stoats and related mustelids are often infested with a parasitic nematode worm Skrjabingylus nasicola, which causes skull deformities and can severely irritate the host by inflicting appreciable pressure upon its brain. Some researchers suggest that this may in turn induce the stoat to perform the frenetic dance of death, noting that these animals will even dance in the absence of any potential victims. Other researchers, conversely, claim that the dance is a deliberate ploy to fix the victim's attention, enabling the stoat to approach it stealthily, and even to attract the attention of a potential victim some distance away - hence explaining why a stoat will perform the death dance even when there are no victims close by.

"Supporting the theory that this dance is executed purposefully is a compelling, fully-authenticated report documented by Drs Maurice and Robert Burton in their book Inside the Animal World (1977), in which a pair of predators clearly utilised the dance as a decoy. A crow was observed watching with keen interest a Himalayan marten frolicking close by, somersaulting and rolling around on the ground. What it didn't see, however, was the marten's mate, cautiously approaching it from the rear. When finally close enough, this second marten made a sudden dash towards the unsuspecting crow and seized it. As soon as that happened, the dancing marten ended its performance, and joined its mate to share in devouring the crow that it had just killed." 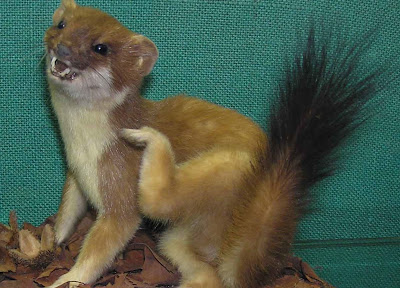