THE IRISH MASTER OTTER IN SCOTLAND? 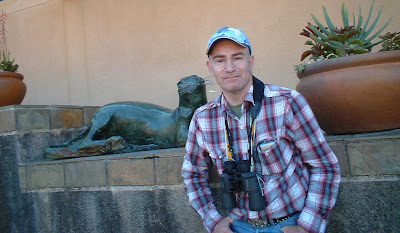 Is that an otter I see behind me? (Dr Karl Shuker)

In my book The Beasts That Hide From Man (2003), I devoted an extensive chapter to the master otter or dobhar-chú of Ireland, which was the very first comprehensive cryptozoological examination of this enigmatic mystery beast. I have also included coverage of it in other publications since then. So in case you haven’t previously encountered the master otter in the cryptozoological literature, here is the concise entry on it that I wrote for Chambers Dictionary of the Unexplained (2007) in my capacity as this fact-filled tome’s cryptozoological contributor:

"Dobhar-chú
Savage otter-like lake monster from Ireland, depicted on the gravestone of an alleged victim.
Congbháil (Conwall) Cemetery in the town of Drumáin (Drummans), forming part of the approach to the Valley of Glenade in Ireland’s County Sligo, contains a grave of considerable cryptozoological interest. The grave is that of Grace Connolly, who was allegedly killed one morning in September 1722 by a very large and savage otter-like lake monster known as the dobhar-chú (‘water hound’) or master otter. According to local lore, it had emerged from Glenade Lake (just inside County Leitrim’s border with Sligo) while Grace was nearby, and fiercely attacked her. Her husband, Terence, later found her dead, bloodstained body at the lakeside, with the dobhar-chú lying across her. Enraged, he shot the beast dead, but before it died the creature let out a shrill scream and moments later a second dobhar-chú, presumably its mate, rose up from the lake’s depths and chased after Terence, who fled on horseback. Finally, however, Terence succeeded in stabbing the vengeful dobhar-chú to death – and depicted on Grace’s tombstone is the very act of the dobhar-chú being mortally stabbed in the chest by Terence, with its head thrown backwards in its death throes. 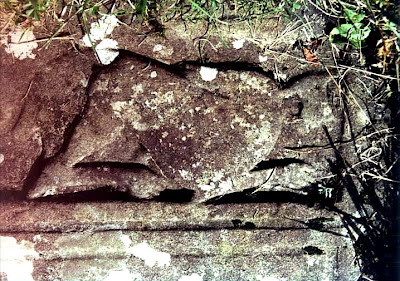 "This tombstone portays the dobhar-chú as being decidedly canine in overall form (thus explaining its Gaelic name’s derivation), with long limbs, muscular haunches, deep chest, and a long tufted tail, but combined with these features are others that are undeniably otter-like, such as its tiny ears, very large paws, short head, and fairly long heavy neck – hence ‘master otter’. Collectively, they yield an animal unlike anything known to contemporary zoology. Intriguingly, however, cryptozoology can offer a very comparable, recent version.

"On 1 May 1968, John Cooney and Michael McNulty witnessed an extremely strange creature run across the road just in front of their vehicle and vanish into some undergrowth, as they were driving home past Sraheens Lough – a lake on Achill Island, off the western coast of County Mayo, which is in the same region of Ireland as Counties Leitrim and Sligo. They later described this animal as having four well-developed legs on which it rocked from side to side as it ran, a long sturdy tail, small head, and lengthy neck. Shiny dark-brown in colour, it measured 2.4-3.0 m in total length. During the next few weeks, several similar reports were made in this vicinity by others too. Could this cryptid have been a dobhar-chú?

"There have been many claims of lake monsters inhabiting various of Ireland’s loughs, but as many of these bodies of water are very small, sceptics have dismissed such a possibility by claiming that the loughs could not sustain such creatures. If, however, they have the ability to move from one lough to another, rather than residing permanently in any single body of water, lough size would not be a problem – and perhaps that is what the Sraheens Lough creature was doing when sighted. The nature of its zoological identity, meanwhile, and that of Glenade Lake’s morphologically-reminiscent dobhar-chú too remain a complete mystery."

Reports of a creature similar to Ireland’s master otter have also emerged occasionally from mainland Scotland, but these have attracted scant cryptozoological attention. One such report is a very noteworthy but little-publicised excerpt from The History of the Scots From Their First Origin by Hector Boece (1575), which was very kindly brought to my attention yesterday by correspondent Leslie Thomson. (A somewhat different version of it, oddly, was published in Peter Costello's book In Search of Lake Monsters, 1974, but without comment, and only in relation to Nessie.) This excerpt reads as follows:

"...on the summer solstice of the year 1510 some kind of beast the size of a mastiff emerged at dawn from one of those lochs, named Gairloch, having feet like a goose, that without any difficulty knocked down great oak trees with the lashings of its tail. It quickly ran up to the huntsmen and laid low three of them with three blows, the remainder making their escape among the trees. Then, without any hesitation, it immediately returned into the loch. Men think that when this monster appears it portends great evil for the realm, for otherwise it is rarely seen." 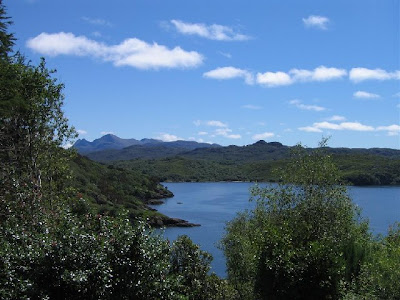 Loch Gairloch (David Crocker)
Loch Gairloch is a sea loch on Scotland’s northwest coast; it measures approximately 6 miles long by 1.5 miles wide. As for the creature that emerged from it, I think it safe to assume that its tail’s oak-felling prowess owes more to literary exaggeration than to anatomical accuracy. Conversely, the likening of its feet to those of a goose probably indicated merely that they were webbed. Overall, therefore, the mastiff-sized, web-toed, fleet-footed, quadrupedal water monster of Gairloch does recall the master otter of Glenade Lake, but its taxonomic identity, as with the latter beast’s, remains unresolved.

Could the explanation simply be an extra-large version of the common otter Lutra lutra? Or are the master otter’s lengthier limbs and other morphological differences evidence that it was – or is - an entirely separate, zoologically-undescribed otter species? Interestingly, back in the early 1960s this latter identity was suggested for an even more famous aquatic mystery beast of Scotland, the Loch Ness monster, by zoologist Dr Maurice Burton within his book The Elusive Monster (1961).

As an intriguing digression, Leslie also sent me a second, equally remarkable excerpt from Boece’s book:

"In this estuary there sometimes appear some ill-omened phantoms with human faces, wearing monks’ cowls, as it seems, which rise out of the water as far as their waists, and these are called bassinats in our native language."

Rising up out of the water as far as their waists is an activity that readily calls to mind inquisitive seals, but seals do not wear cowls or possess human faces, so what could the bassinats be? I have been unable to locate any definition or information relating to this term – but is it familiar to someone reading this post? If so, please write in with details – thanks!

Finally, returning to the Irish master otter: an excellent source of information concerning this cryptid is a recently-published book entitled Mystery Animals of Ireland (CFZ Press, 2010), written by Gary Cunningham and Ronan Coghlan. Here is a review of it that I recently penned for Amazon.co.uk:

"As someone with a lifelong interest in the Emerald Isle's diverse assortment of cryptozoological and mythological beasts, I have been waiting for a very long time for someone to produce an extensive survey of these extraordinary creatures. Now, at last, I'm delighted to say that my wait is over, thanks to this fascinating and extremely comprehensive volume.

"Written by two well-known names in the field of Irish cryptids, all of the major, and many equally remarkable minor, examples are here - the master otter or dobhar-chú, Achill Island dwarf wolf, pork badger, wandering walruses, horse eels, Irish wildcat, mer-folk, pooka, Irish stoats, sea serpents aplenty, fairy foals, werewolves, polycephalids, leprechauns, even a few snakes seemingly overlooked by St Patrick, and lots more besides. The scholarship of this volume cannot be faulted, with the chapters on the dobhar-chú and the horse eels in particular being packed throughout with outstanding original research.

"I could go on and on, but you don't want to read my description, you want to read this book for yourself! I can recommend it to anyone with an interest in cryptozoology, and if, like they are for me, Irish cryptids are a particular passion of yours, you are in for a rare treat indeed!

"In fact, it's so enjoyable a read that I strongly advise you not to take your eyes off it for too long, just in case, like the leprechauns that it documents, this delightful book vanishes - into the pocket of some other avid reader anxious to acquaint themselves with its captivating contents!". 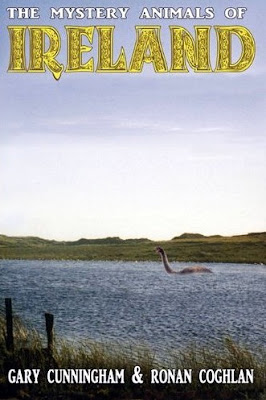