THE CURIOUS CASE OF THE WEREWOLF PAW...THAT WASN'T! 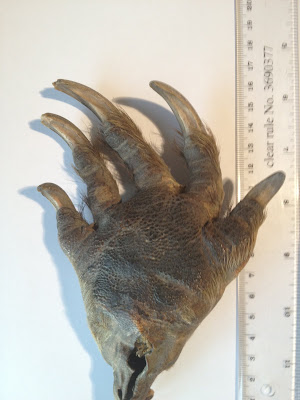 
One thing about being a cryptozoologist is that I regularly receive the most unusual emails, and the following one was no exception! It was sent to me on 5 September 2012 by Ben Coult from County Durham in northern England:

"I have an interesting artefact that I found about 15 years ago and was wondering if you would be interested in me sending you through a few photos of it?

"Firstly let me assure you that I am fairly well versed in the subject, having read Heuvelmans and Sanderson for years, and was recently referred to your website by a friend. Also I have a solid upbringing in local natural history and many contacts in that field.

"I shall now elaborate, firstly I am from a small village in the north east of England in county Durham (an area not known for unusually large mammals), when I was about 16 myself and a friend were riding bikes through the village when I spotted something in the road which looked for all the world like a poorly stuffed hand. I jumped off the bike and retrieved it and it turned out to be just that. At the age of 16 the 'hand' was only marginally smaller than my own, it has a tough leathery pad on the palm and was obviously heavily haired on the back although (it is obviously quite old) the hair is now sparse. The hand has five 'fingers' each equipped with a 20 to 30 mm claw, these are heavy and curved and look similar to Sloth or Ratel claws.

"I have had numerous people look at it including a family friend who is the ex-taxidermist for the Hancock museum in Newcastle and no-one has been able to identify it yet apart from saying 'it could be' or 'it looks like'. Another strange twist to this is that the wrist of the hand has been twisted together and dried, this looks like it must have been done when the specimen was originally stuffed, and a purple ribbon was tied around the pinched in wrist.

"The hand has been sat on my bookcase for 15 years now although I still try and get people to identify it from time to time, hence this email. If you are interested please drop me an email and I will send through a couple of pictures."

Needless to say, I was extremely interested, as my curiosity had definitely been piqued by this singular incident. So I emailed Ben back straight away with a request to see his photos of the hand, and a few hours later I received five close-up pictures of it, reproduced here with Ben's kind permission. 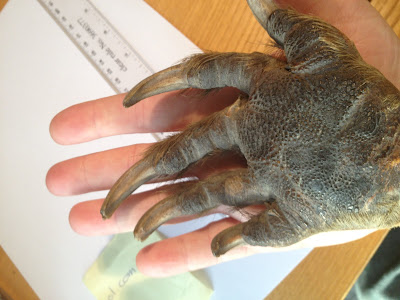 My first thought when I looked at them was 'badger', and when a few days later I posted on my Facebook Wall and on the pages of the various Facebook cryptozoology groups that I've founded the photograph that heads this present ShukerNature blog article, most of the FB friends commenting upon it shared my thought. Yet when I compared Ben's photos of his preserved paw specimen to photos of badger paws, the correspondence did not seem very close at all. 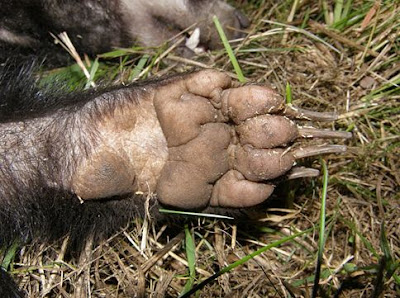 In particular, as can be seen here, the plantar (palm) pad of the badger was very different in form from that of this paw, and the digits of the badger paw seemed much shorter and broader than those of the latter. There was also the latter's distinctive mosaic-like skin patterning to explain. 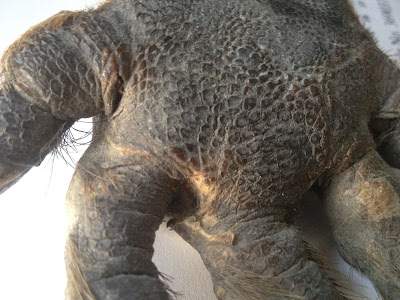 Also, if it were indeed nothing more unusual than a badger's paw, why hadn't the professional, highly-experienced taxidermist to whom Ben had shown it been able to identify it?

Perhaps, therefore, as Ben had speculated, it was indeed from something rather more exotic, but what?

Other suggestions posted to my FB pages included bear, monkey, sloth, mole, turtle, and (albeit decidedly tongue-in-cheek!) chupacabra and werewolf! 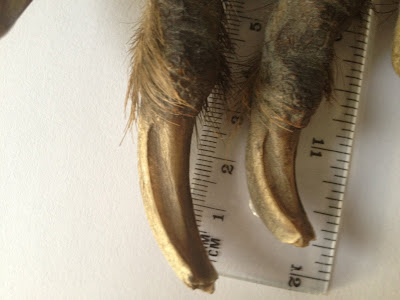 The claws of the paw are very pronounced (Ben Coult)

Someone who shares my own interest in unusual preserved animal specimens is Southampton University palaeontologist and Facebook friend Dr Darren Naish, so on 8 September I posted onto his FB Wall this same paw photograph and the background details concerning the paw, and waited for his opinion as to the likely identity of its original owner. When I received it later that evening, I was certainly surprised, because Darren suggested that it was the paw of a kangaroo!

When he followed up his pronouncement, however, by posting the following link to an online photograph of a kangaroo's paws:

there could be no doubt as to the accuracy of his identification, because as can be clearly observed below, the paws in this photo provided a perfect match with Ben's enigmatic specimen, right down to the mosaic skin patterning. Well done, Darren! 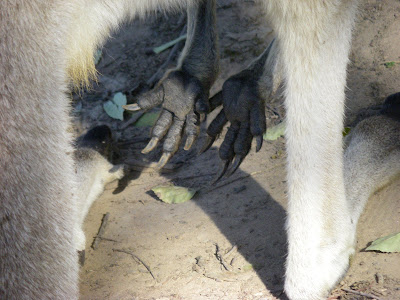 The photograph of a kangaroo's paws from the above link provided by Darren (3amkickoff.files.wordpress.com)

Fellow FB friend Markus Bühler also sent me some online photos of kangaroo paws, and I located some as well, thereby providing plenty of independent confirmation for this identity.

Judging from the paw's size, the precise species involved is most likely to be either the red kangaroo Macropus rufus (which is the world's largest living kangaroo species as well as the largest surviving marsupial of any species) or the great grey kangaroo M. giganteus (the second-largest kangaroo species alive today). Adult males of the red kangaroo stand up to 6.9 ft tall (up to 6.6 ft in the great grey) and weigh around 200 lb or more (around 145 lb in the great grey). Both species are extremely common and used in a wide range of commercial ventures. 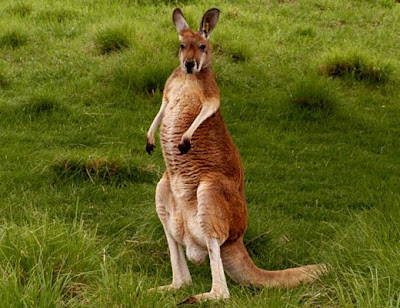 Nevertheless, one aspect of the mystery of Ben's preserved paw remained unresolved. Why had its wrist been constricted with a ligature of purple ribbon, and why was this paw lying discarded on the road?

Another Facebook friend, Martin Cotterill, has amassed a very impressive collection and knowledge of taxiderm specimens and other natural history exhibits, and he wondered whether the paw could have been derived from a kangaroo-paw backscratcher. I knew that macabre novelty items like this do indeed exist - some dating back to Victorian times and occasionally met with at antique fairs or in bric-a-brac shops, as well as modern-day ones still widely sold in Australian souvenir shops. A swift check online revealed photographs of several such objects, consisting of a genuine preserved kangaroo paw attached to a long pole. If the paw from one of these backscratchers were pulled off, it would then need to be tied tightly closed at its base, in order to prevent its stuffing from falling out. So that would explain the presence of the purple ribbon ligature around the wrist of Ben's specimen. 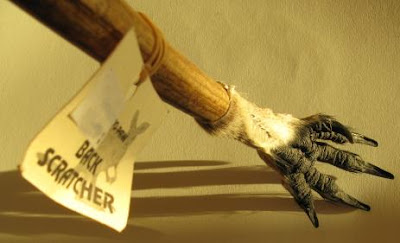 In short, Ben's mystery specimen was the paw from a kangaroo-paw backscratcher, which presumably had either been broken or been deliberately pulled apart in order to obtain the paw as a somewhat grotesque curiosity, which had subsequently been discarded, lying on the road until Ben had cycled by all those years ago and found it there. It also explains why even his knowledgeable taxidermist friend had not recognised what animal it had originated from, as I can't imagine that he'd seen too many demised kangaroos in County Durham!

Another mystery beast case solved, via the collective 'brain' of my Facebook friends network and myself, with particular thanks to Dr Darren Naish, Markus Bühler, and Martin Cotterill, but most of all of course to Ben Coult for so kindly bringing this highly intriguing case to my attention and permitting me to document it here. 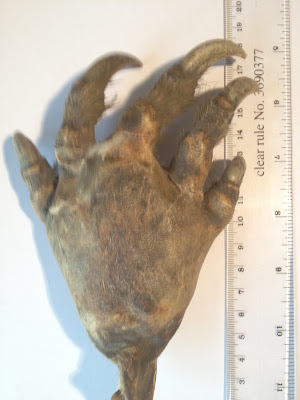