A SCALY STATUETTE OF THE MOKELE-MBEMBE? 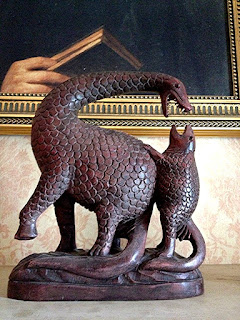 On 7 April 2013, Brother Richard Hendrick, a Capuchin Franciscan Friar (Monk) of the Irish Province who has long been interested in cryptozoology, posted on my 'Journal of Cryptozoology' Facebook group's page a colour photograph that he had snapped a few days earlier, depicting a very eyecatching wooden statuette, and which I have included above by kind permission of Brother Richard.

He also included the following details about it:

Found this African carving in a collection held by the Rosminian Missionary Fathers in Glencomeragh House, Clonmel [in County Tipperary] Ireland. No provenance or date other than sometime this century probably from west Africa. Intriguing? 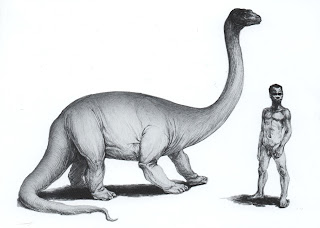 The mokele-mbembe rendered as a sauropod, by David Miller under the direction of Prof Roy P Mackal (© Prof. Roy P. Mackal)

After a few replies from others in this FB group were posted in response to his photo and comment, including one from American crypto-author Matt Bille saying that it looked to him like a modern creation, possibly inspired by western interest in the mokele-mbembe (rather than an example of traditional native artwork), Brother Richard responded as follows:

I'm afraid I know very little more than I mentioned above. The Rosminian Fathers are a missionary order and worked for many years in Africa. Many of the Irish fathers brought back souvenirs of their time there on their return to Ireland. I was merely visiting the house on retreat myself and spotted it sitting dusty and forgotten amongst many other carvings. I would guess it has been there since at least the 1950s as no one currently living in the house seemed to know anything about it and didn't see it as anything extraordinary. It does have a "modern" feel but I felt it was worth sharing.

(Judging from his comment that he felt that this carving had probably been at Glencomeragh House since at least the 1950s, his previous comment that it probably dated from "sometime this century" was no doubt simply a slip of the pen, having forgotten momentarily that this is now the 21st Century, not the 20th.) 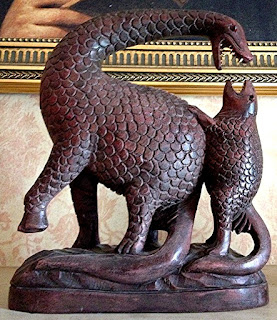 I have to say I was more intrigued by the second creature? Not sure if it represents a "baby" or another species. I guess at the very least it demonstrates the creature being present in a "culture" even if it was introduced as an idea by those seeking it.

Not sure if it is in a fighting / mating / feeding pose with the larger creature. They both appear to have the same tail, scales and cloacal opening though. A puzzle to add to the connundrum of the whole piece! Never seen anything like it before though!

When I contacted him directly concerning this carving, I learnt that it was roughly 6 in tall, was quite heavy, seemed to have been carved from a single piece of wood, and although he had examined it rather thoroughly he did not see any inscriptions or dates on it.

There is no question that the larger of the two animals in this carving closely resembles a sauropod dinosaur in body shape. However, it also sports certain highly unusual features for any such identity. Most obvious of these is its array of extremely large, almost pangolin-like overlapping scales, which are absent only from its face, feet, and, most noticeably, the entire extent of its long tail, and which have not been reported by mokele-mbembe eyewitnesses in the Congo (though crocodile-like scales have been claimed by the Baka pygmies for their Cameroon version, the li'lela-bembe). Nor has the large, even more intriguing – and very odd - rayed fin-like structure visible on the underside of its tail's basal portion, which Brother Richard suggested may be a cloacal opening. And its long pointed teeth are not what one would expect from a herbivore, though these may simply be non-specific, stylised representations.

As for the carving's second, smaller animal, standing upright on its hind legs, possibly supported somewhat by its tail, but also resting directly upon the sauropod-like beast's rear body portion, this does not resemble any creature known to me and is something of a paradox. For whereas it sports exactly the same type of body scales as the 'sauropod', and the same kind of tail too, even bearing an identical rayed fin on its tail's basal underside, the body scaling is absent from its lower limbs, it totally lacks the long neck of the 'sauropod', and its face and jaws do not match those of the latter beast either.

Is this small animal meant to represent a young version of the 'sauropod', I wonder? The presence of the same type of scales and in particular the very distinctive underside tail fin (which is unlike anything that I know of in vertebrates present or past), would certainly support such a possibility. Yet its virtually non-existent neck argues in an equally persuasive manner against this option. Even the pose in which the 'sauropod' has been depicted in relation to the small animal is somewhat ambiguous, as recognised by Brother Richard too, and could be construed equally as one of anger toward a potential attacker or as one of response (feeding?) toward its own offspring.

British mystery beast researcher Penny Odell made a very interesting, original contribution to the series of comments posted beneath Brother Richard's photo of the carving that may explain the small creature's contradictory form:

I think it is supposed to be the same species. However the artist only had a certain space and size of wood and ability to carve with. Had the smaller animal been given a longer neck it would have changed the carving making it harder to carve into the space[;] therefore the artist made the smaller animal with a shorter neck for convenience.

With virtually no historical information concerning this fascinating artefact available, there is little more that can be said about it. Despite being for many years a keen visitor to antique/collector/ethnic-craft fairs and shops, and an equally avid online browser relating to such areas of interest, I have never encountered anything even similar, let alone identical, to this carving before. And if it does date back to at least the 1950s, this long precedes the Mackal mokele-mbembe expeditions from the early 1980s that incited the continuing modern-day wave of interest in the latter Congolese cryptid, thereby offering support for believing that this carving's creation was not sparked by any Western interest in such a creature after all. Yet if it is a traditional native depiction of a mokele-mbembe or comparable cryptid, how can the scaling, the tail fin, and the short-necked smaller beast be explained? 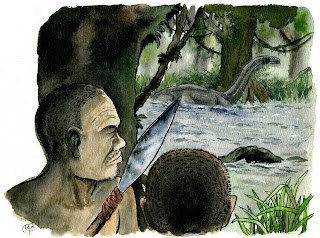 Another sauropod-inspired representation of the mokele-mbembe (© Richard Svensson)

My sincere thanks to Brother Richard for so kindly making available to me his photograph of this enigmatic, hitherto-unpublicised statuette and his information concerning it.

This ShukerNature blog article is excerpted from my newly-published mega-book, Still In Search Of Prehistoric Survivors. 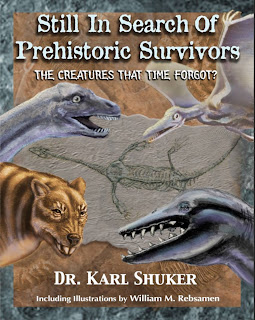