LIONS AND SATYRS AND DRAGONS, OH MY! – CAR BOOT SALES AND CRYPTOZOOLOGY #2 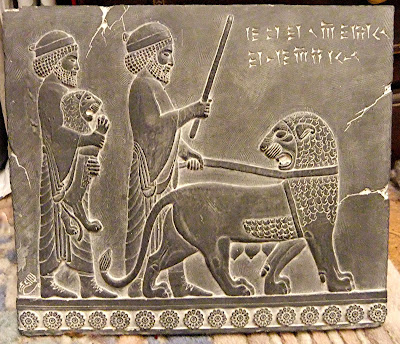 
I am very fond of modern-day replicas of ancient artwork that are popularly sold as tourist souvenirs at the sites in question (tragically, the multi-million-pound price tags of the originals place them a little outside my available budget right now!), and over the years I've been fortunate enough to acquire several interesting, good-quality examples at various car boot sales and bric-a-brac fairs, and which relate in some manner or other to mystery animals.

My most recent addition, purchased for just 50p (!) at a car boot sale three weeks ago and illustrated at the beginning of this ShukerNature blog post, is a large stone replica of a lion-depicting relief that appears on the left-hand staircase of Darius the Great's Apadana Palace at Persepolis in what is now Iran, and dating from the 6th Century BC - as I and several Facebook friends collectively discovered during some recent FB-mediated detective work (special thanks to Mandy Holloway, Penny Odell, and Kirst d'Raven!).

Specifically, the carving depicts two Elam tribesmen bringing a couple of lions as tributes to King Darius, as lions were sacred animals in the religion of Zoroastrianism that prevailed at Persepolis. 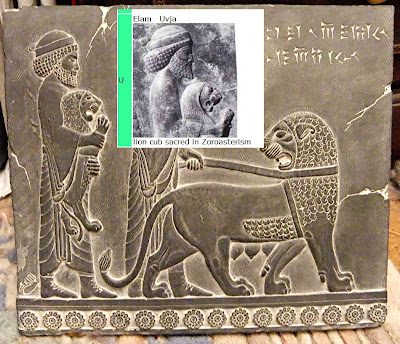 My replica relief and, superimposed, a section of the original version at Persepolis (Dr Karl Shuker and Wikipedia)


Curiously, however, even though the adult lion is evidently a female (she has teats) and the lion being carried is obviously only a cub (as evidenced by its small size), both are portrayed with luxuriant manes. Could this simply a stylistic convention? Yet if so, why are there normal, maneless lionesses depicted on various other Assyrian reliefs, such as the Royal Lion Hunt series from the North Palace at Ninevah (645-635 BC), now held at the British Museum? Alternatively, freak lionesses with manes have occasionally been confirmed both in the wild and in captivity, so such a specimen would not be unknown, though the maned cub remains unexplained.

A few months earlier, and at a separate car boot sale, I invested £4 in the purchase of this very different but equally interesting lion-depicting replica. A paperweight, it consists of a hefty lump of solid rock, one face of which has been sliced across, upon which a lion in mosaic-style has then been carved, after which the face's surface has been carefully smoothed to yield a highly-polished finish. 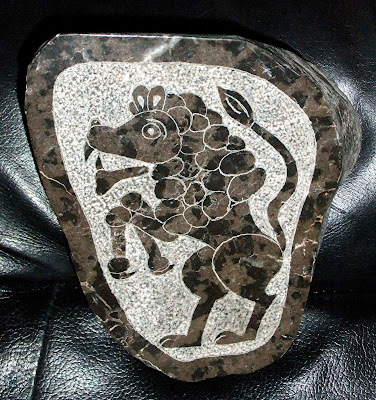 Although I have definitely seen photos of lions portrayed in a similar (if not identical) style, which may have been of ancient Greek or Roman provenance, I have so far been unable to trace any of them, so at present the identity of the original artwork upon which this modern-day replica is based remains a mystery to me. Consequently, if anyone reading this ShukerNature blog post recognises it, I would greatly welcome any pertinent information.

The same applies to this modern replica of an ancient stone bust of a satyr, which I purchased for £5 from a charity shop in King's Heath, Birmingham, last year. There is a label underneath, written in Greek, which correctly identifies it as a satyr (those half-human, half-goat entities from classical Greek mythology that spent their days liberally imbibing wine and libidinously fraternising with nymphs), and gives the date of the original bust as c.400 BC, but I haven't been able to identify or locate the latter so far. Once again, therefore, any pointers would be very gratefully received! 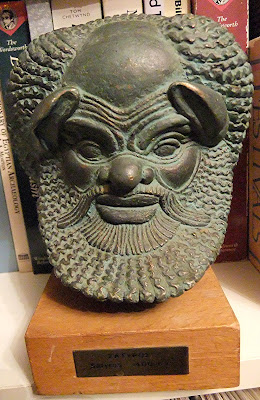 Yet another unsourced modern-day replica acquired at a car boot sale is this small but attractive wooden tableau depicting St George dispatching his pesky dragon foe. It greatly resembles various early Turkish portrayals of this famous, much-represented scene, but as yet I haven't encountered an exact match for it. So any thoughts or suggestions would indeed be most welcome! 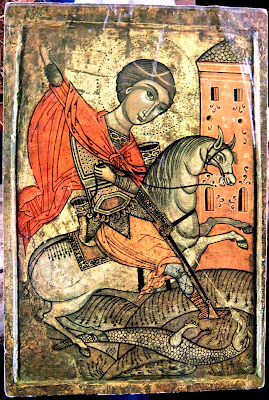 My replica of a early Turkish (?) portrait of St George and the Dragon (Dr Karl Shuker)