MYSTERY OF THE PARROT IN THE PAINTING 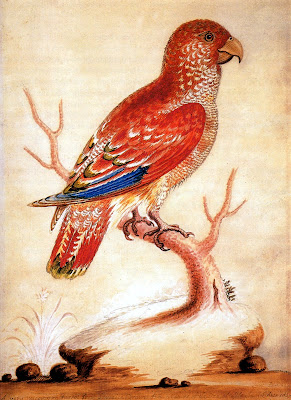 
I am greatly indebted to acclaimed ornithological author and painter Errol Fuller for kindly bringing the following case to my attention, which had never previously been documented until he kindly permitted me to do so in my book Mysteries of Planet Earth (1999).

The modern-day history of George Edwards's red mystery parrot from Jamaica began in June 1996, when Errol attended the annual Olympia Antiques Fair in London. While walking round, he noticed on the stall of one dealer a picture that he knew at once to be the work of English bird painter George Edwards (1694-1773). Popularly dubbed the father of British Ornithology, Edwards was the author and illustrator of A Natural History of Uncommon Birds (1743-51) and Gleanings of Natural History (1758-64). 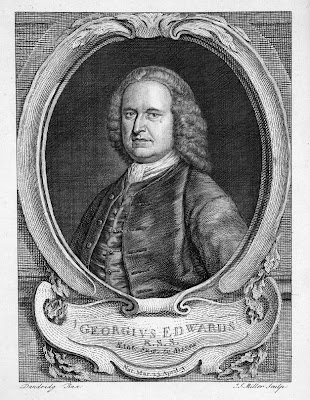 Yet although he was very familiar with all of the paintings in both of these books, Errol did not recognise this particular example on the dealer's stall, and suspected that it was an unpublished, unknown work of Edwards. Greatly intrigued, Errol purchased the painting, and after researching it thoroughly he was able to confirm that it was indeed unknown.

Errol has very generously granted me permission to reproduce this painting in my publications (its appearance in Mysteries of Planet Earth was the first time that it had ever appeared in print), so it now appears as the opening illustration in this present ShukerNature blog post. As can be seen, the painting depicts a predominantly red, vaguely amazon-like parrot - which only serves to deepen further the mystery encompassing this picture. For there is no known species of parrot anywhere in the world that corresponds with this specimen. So what could it be, and where did it come from?

The painting bears an inscription at the bottom:

"A very uncommon parrot from Jamaica. Drawn from Nature of the size of life [i.e. life size] by G. Edwards. July 1764".

A more detailed one, clearly penned by Edwards himself, is written on the painting's reverse:

"The insides of the wings and the underside of the tail is of a Durlis [darkest?] yellow, the colours of the upper sides casting faintly through them.

"This bird was lent to me by Dr. Alexander Russell and is Preserved in his collection. It was shot in Jamaica and brought dryed [sic] to England. The people in Jamaica did not remember Ever to have seen one of this species of Parrots before.

"Some of the feathers have their tipps [sic] red and others have them yellow. The feathers on the undersides, Back and rump have yellow with fine transverse lines of red."

Dr Alexander Russell (1715-1768) was a renowned British naturalist and Fellow of the Royal Society. If only his collection of zoological specimens containing this seemingly unique bird still existed, it may be possible to investigate its taxonomic identity further, perhaps even via modern techniques involving DNA comparison. However, neither Errol nor I have uncovered any record as to the collection's fate. Indeed, 200+ years ago the taxiderm techniques available were such that few specimens survived for any length of time in a satisfactory condition. Quite probably, therefore, the mystery red parrot of Jamaica degraded into a pile of dust and decomposed feathers long ago.

On account of its singularity, and unfamiliarity even to the Jamaican natives, this individual may well have been a mutant specimen of some known species - perhaps an erythristic (aberrantly red) mutant of one of the smaller species of West Indian amazon parrot? - rather than a distinct species in its own right. One such species, the yellow-billed amazon Amazona collaria, is native to Jamaica. So too is the black-billed amazon A. agilis, which at just 10 in long is the smallest known species of amazon parrot. 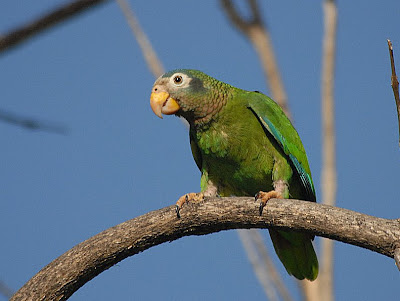 In the painting, which is life size, it is 9 in long, as measured in a straight line from the top of its head to the tip of its tail. Alternatively, it may not have been native to Jamaica, but might conceivably have been brought here from elsewhere. Yet even if so, its taxonomic identity remains unsolved.

As for the origin of the painting itself, all that the dealer could tell Errol was that it had been in a portfolio of 18th and 19th Century watercolour paintings purchased by him at a country house sale, and was the best picture in the portfolio. Judging from its date, 1764, this painting may have been prepared by Edwards for inclusion in his Gleanings but was ultimately omitted, or it may have been prepared for a new book that he never completed.

And here is where, at least for the present time, this double mystery - of the painting, and of the parrot depicted in it - stands. If anyone can shed any light regarding either of them, including sharing any information regarding Dr Alexander Russell's collection, Errol and I would be very interested to receive details.

This ShukerNature blog post is an adapted excerpt from my book Mysteries of Planet Earth: An Encyclopedia of the Inexplicable (Carlton: London, 1999). 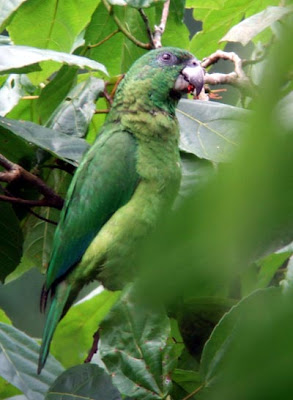