EVEN MORE SKY BEASTS - RETURN OF THE LIVING UFOS? 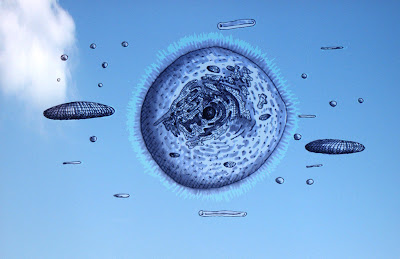 In previous ShukerNature blog posts (click here and here), I have examined the remarkable theory put forward independently by several ufologists down through the decades that at least some UFOs may actually be undiscovered flying organisms – sky beasts. That is, highly specialised life forms adapted for an exclusively aerial existence amid the atmosphere encircling our planet, and thereby occupying a fundamental ecological niche that would otherwise be inexplicably ignored by the normally highly-productive nature of evolutionary radiation. And in those posts of mine, I have presented various reports that may relate to such organisms.

On 14 January 2013, I received another such report, which was sent to me by veteran American UFO investigator and eyewitness Ben Garfield after he had read my previous above-noted posts. Moreover, Ben has very kindly granted me permission to document it in ShukerNature, so here it is:

"I've been researching ufos for nearly 40 years now since my first sighting back in 74...What I saw on May 3rd 2010 [at McHenry, Illinois] has me convinced there are living things that fly in our skies that we are not being told about....I've read thousands of reports and found many that were very similar to what I saw...Some of these date back to the wave of 1947...While I was sitting in the shade waiting to do my afternoon chores...I live on a hobby farm...I was looking at clouds forming towards the west....A small reflection caught my eye...This was in the upper section of the cloud which was at 8500 feet + or -....I focused on that point of light and saw several objects that were diving in and out of a cloud...They would dive out in a slight arc then a reflection of the sun was made...As soon as the reflection occurred they would zig zag or stairstep climb back in...I don't know how many for sure there were but at least three or four...At first I thought they were giant birds but later ruled that out because birds don't fly vertical that high and that fast ......I would like a response because you seem like someone that will listen to what I have to say.....From all of the reports that I have read I am starting to see a pattern to their behavior....These objects were forming a semi circle going counter clockwise.....They reacted to the sun's reflection....These were not birds nor airplanes."

Ben has also supplied an account of his above sighting to http://worldufophotosandnews.org, which can be accessed here.

After I emailed Ben concerning it, I received a further response from him on 21 January 2013, which included the following additional information relevant to his sighting:

"What I have found in many similar reports is they do this circling manoeuver to signal others from afar to join in...shortly after, all depart at high speed... Paul Hill, Scientist and author of Unconventional Flying Objects....Read section II Performance...A must read, Takes five minutes....But he thinks they're scout ships.....I think different." 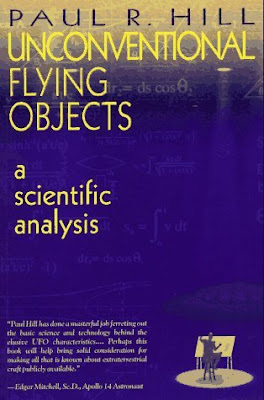 Paul Hill was a well-respected NASA scientist when he experienced a UFO sighting during the early 1950s. This prompted him to undertake three decades of research into their physical properties, propulsion, dynamics, etc, by the end of which he confirmed that despite many claims to the contrary, they did not defy the laws of physics as we currently know them, but acted entirely within their known boundaries. As Ben, notes, however, Hill believed UFOs to be the product of technology rather than nature (for a useful online synopsis of Hill's UFO-related work and beliefs, click here). So where does that leave Ben's sighting?

I am not a ufologist, and naturally I am aware that there are a number of unusual and/rare meteorological and astronomical phenomena that can create aerial light flashes, examples of which are documented in the relevant volumes within William Corliss's excellent and highly prolific 'Sourcebook Project' series. However, as a zoologist I am certainly intrigued by the ostensibly animate, active nature of movement exhibited by the objects observed by Ben.

Has anyone else sighted objects similar to these? If so, I'd be interested to receive details here, or any pertinent thoughts as to their possible nature or identity.

For an extensive coverage of the sky beast theory of UFOs, check out my book Dr Shuker's Casebook (CFZ Press: Bideford, 2008). 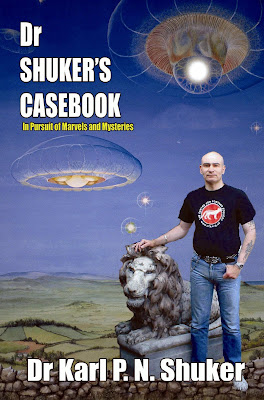