NELSON MANDELA AND THE AFRICAN TIGER

A striped mystery cat with an incongruous tail tuft from Saqqara, Egypt

The most famous striped or brindled mystery cats on record from Africa are the Tanzanian nunda or mngwa (click here for a ShukerNature post devoted to this feline cryptid) and the so-called mountain tiger of the Central African Republic, which has been likened in outward appearance to Africa's prehistoric sabre-tooth Machairodus. However, these are not the only ones by any means, as demonstrated by the following selection of lesser-known striped crypto-cats reported from the Dark Continent.

The Ethiopian wobo is known chiefly from the baffling pelt formerly exhibited at the principal cathedral of Eifag. According to Ethiopia's Amhara and Tigré inhabitants, the wobo is larger than a lion and yellowish-brown or brownish-grey in colour with black stripes. Sceptics dismiss the Eifag skin as a tiger Panthera tigris pelt brought there from Asia by a traveller or merchant, but as the wobo is a familiar beast to many Ethiopians, this is not a satisfactory explanation - especially when an identical creature, dubbed the abu sotan, has been reported from the mountains near the River Rahad in neighbouring Sudan.

Speaking of tigerine beasts in Sudan: in 1951, eminent Sri Lankan zoologist Dr Paules E.P. Deraniyagala actually described a new subspecies of tiger, Panthera tigris sudanensis, the Sudan tiger, based upon a pelt that he had seen in a bazaar in Cairo, Egypt, and which the seller claimed had originated from a tiger shot in Sudan! Although he did not purchase the pelt, he did photograph it, and according to Czech mammalogist Dr Vratislav Mazák, who documented this curious affair in 1980, it clearly resembled that of a Caspian tiger P. t. virgata, and had probably been smuggled into Egypt from Turkey or Iran.

Back to bona fide striped mystery cats, and definitely in need of an explanation is an illustrated limestone relief from the tomb of Ti, a wealthy 5th-Dynasty Egyptian landowner and courtier (c. 2490-2300 BC), at Saqqara - for among the many animals portrayed is a striped tiger-like cat, but with a distinctly leonine tuft at the tip of its tail. Is it a freak lion whose juvenile spots have coalesced into stripes (such specimens are known - see later), or an imported tiger poorly represented? Or could this enigmatic image be a portrait of a species still unknown to science? Whatever the answer, it is significant that all of the other animals present in this relief, including a lion and a leopard, are accurately depicted and readily recognisable. 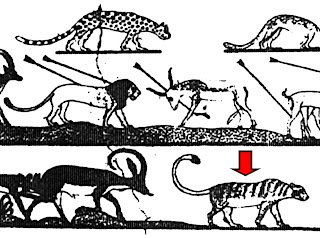 And why, as noted by Nelson Mandela no less in his 1994 autobiography Long Walk To Freedom, is there a word for ‘tiger’ in South Africa’s Xhosa language? Mandela revealed this fascinating little fact while arguing with various fellow prisoners on Robben Island who were insisting that they had seen tigers in Africa’s jungles. Here is his account of this intriguing claim:

"One subject we hearkened back to again and again was the question of whether there were tigers in Africa. Some argued that although it was popularly assumed that tigers lived in Africa, this was a myth and they were native to Asia and the Indian subcontinent. Africa had leopards in abundance, but no tigers. The other side argued that tigers were native to Africa and some still lived there. Some claimed to have seen with their own eyes this most powerful and beautiful of cats in the jungles of Africa. I maintained that while there were no tigers to be found in contemporary Africa, there was a Xhosa word for tiger, a word different from the one for leopard, and that if the word existed in our language, the creature must once have existed in Africa. Otherwise, why would there be a name for it?"

In 2005, British scientist Tim Davenport made zoological headlines with his co-discovery of the kipunji Rungwecebus kipunji - a new species, and genus, of mangabey monkey in Tanzania’s Rungwe (Rongwe) highlands that was well known to the local people (‘kibunji’ is its native name), but which had previously been dismissed by scientists as a wholly mythical spirit beast. Still dismissed today as such, conversely, is the so-called Rungwe tiger.

The aardwolf, a striped member of the hyaena family (Dominik Käuferle/Wikipedia)

According to the locals, this is a large striped animal, a description not matching that of any known species from this area of Tanzania. Davenport concedes that it could be a striped hyaena Hyaena hyaena or aardwolf Proteles cristatus - albeit way out of its known range - but does not discount that it might be a still-unknown species. After all, he has only to look at the kibunji to know that such a prospect is far from unrealistic in this remote African locality.

Although Kenya's mysterious spotted lion or marozi, and its counterparts reported elsewhere in Africa (such as Rwanda's ikimizi, Uganda's ntarargo, and and Cameroon's bung bung), have been well documented (see my earlier book Mystery Cats of the World, 1989, for the most extensive coverage published), striped lions are another matter entirely. Interestingly, in 2003 a novel entitled The Striped Lion, written by Mike Sackett, was published, which featured a marauding big cat on the loose in Africa that resembled a bona fide striped lion but was in fact a tigon - a hybrid of tiger and lioness. Here is a brief plot synopsis for this book as quoted from Amazon:


"The Striped Lion is the story of a bold experiment in wildlife conservation gone horribly wrong. A world-renowned foundation dedicated to the preservation of big cats accidentally impregnates an African lioness with the semen of a man-eating Siberian tiger and releases her into Kenya's Masai Mara Game Preserve. Only one of her cubs, the Alpha Male, survives to maturity but hybrid vigor has endowed him with monstrous size and his father's genes have given him a taste for human flesh.

"Fatalities mount across the Masai Mara as the tourist season approaches, threatening the Game Preserve's survival. Soon a desperate race is joined by the foundation and the Kenyan government to find and destroy the elusive predator before he kills again. But the searchers discover the problem is far more serious than they had ever imagined: The huge crossbreed has been mating with the local lionesses, and his offspring are man-eaters too."

Sadly, however, this book's plot contains a fundamental zoological flaw. The feline villain of The Striped Lion is a tigon - a hybrid of tiger and lioness. Yet as revealed by real-life specimens, it is only the reciprocal crossbreed, the liger - a hybrid of lion and tigress - which is bigger than its two pure-bred progenitor species; the tigon, conversely, is generally smaller and much less impressive. Moreover, male big cat hybrids are normally sterile, not fertile (in contrast, some females have proved to be fertile, giving birth to second-generation hybrid or back-crossed cubs). Hybrid misconceptions notwithstanding, The Striped Lion sounds like an enjoyable, entertaining read for anyone like me who is fascinated by the more unusual and unexpected members of the animal kingdom, so I shall certainly be seeking out a copy.

As for real-life, non-hybrid striped lions: As noted by cat expert C.A.W. Guggisberg, in some lion cubs their juvenile spots are arranged in distinct vertical lines, and occasionally these merge to yield true stripes. Normally of course, the spots of juvenile lions disappear as they mature, and so too, therefore, would any stripes that resulted from the merging of such spots. However, Ivan Heran’s book Animal Coloration (1976) includes a photo of an adult maned lion with several clearly-visible vertical stripes decorating its flanks, as seen here. 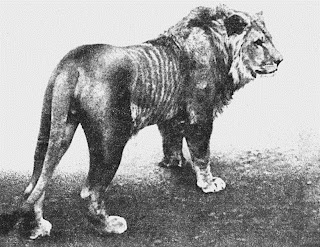