THE BLACK LION VERSUS TARZAN! 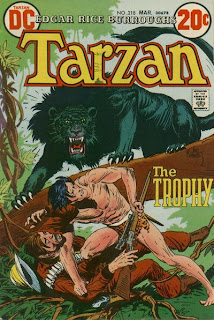 In earlier ShukerNature posts of mine (click here and here), I have revealed that although a number of unconfirmed reports can be found in the archives of cryptozoology, as yet there is no conclusive evidence for the reality of black lions (i.e. lions exhibiting melanism), and that four much-circulated online photographs purporting to be of genuine black lions are nothing more than Photoshopped fakes.

Nevertheless, the very concept of a black lion is so captivating and compelling that it has been utilised very effectively in fiction. Perhaps the most stunning example of this was recently brought to my attention by Facebook friend Sefton Disney, and features a mighty confrontation between a magnificent black lion and a very formidable rival for the crown of African jungle king - Tarzan!

As seen in the illustration that opens this ShukerNature blog post, issue #218 of 'Tarzan', published by DC Comics, contains a story entitled 'The Trophy', and appearing on this comic's spectacular front cover is Tarzan fending off a ferocious black lion. This superb artwork was created by the late, great artist Joe Kubert.

Moreover, this is not the first time that Tarzan has done battle with a cryptid - check out a previous ShukerNature post of mine for details of his encounter with the terrifying Nandi bear and a separate adventure pitting him against a spotted lion (click here), plus his secret meeting with the reclusive mokele-mbembe (click here). Who needs cryptozoological field work in search of Africa's most elusive mystery beasts when all we have to do is send out Tarzan!!

NB - A Buy It Now button for pre-ordering my latest book, Cats of Magic, Mythology, and Mystery (CFZ Press: Bideford, 2012), will be available here and on my website very soon - so please check back often!