THE PANTHER OF GIFFARD'S CROSS – AS SIMPLE AS ABC?

Several centuries before any of the modern-day specimens had appeared on the scene, an exotic British mystery cat was big news not all that far away from where I live today. Indeed, its case may even be one of the earliest records of a so-called alien big cat (or ABC for short) in Britain that did not involve some unidentifiable feline creature heavily enshrouded in fable and fancy but rather featured a bona fide non-native big cat on the loose. Although certain details differ from one account to another, the basic facts of this historic case in British cryptozoology are as follows.

Just outside the village of Brewood, near Wolverhampton in the West Midlands, England, is an imposing Georgian mansion called Chillington Hall, set in beautiful parkland. Built during the mid-1780s, it is the home of the Giffard (aka Gifford) family, whose direct link with this site dates back over 800 years, and it is the third residence to have stood here. The previous one was a medieval manor house built during the early 1500s by Sir John Giffard, who was Standard Bearer to Henry VIII, and accompanied him at the Field of the Cloth of Gold in June 1520. 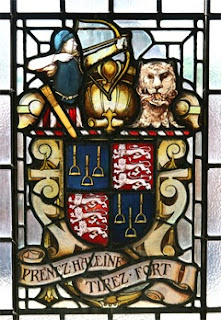 It was several years earlier, however, in or just before 1513, when Sir John's deed of valour took place for which he was granted two family crests by the king, and which also inspired their emblems and motto. One day, a wild cat loosely described as a panther escaped from a menagerie of exotic beasts maintained at Chillington, and was pursued in earnest by the household. The great cat's attention was drawn to a woman carrying her baby through the park, and it began to stalk her. Approaching within range of its intended victim, the panther was just about to spring upon her and the child when Sir John himself appeared on the scene, having been riding with his son through the park in search of it. Armed with his crossbow, Sir John took careful aim, and just as he was about to shoot, his son exclaimed in French: "Prenez haleine, tirez fort!" ('Take breath, pull hard!'). Clearly Sir John followed his son's advice, for he skilfully dispatched the escapee big cat with a single well-aimed arrow through its head.

Later in 1513, the first of the two Giffard family crests granted to Sir John in recognition of his heroic action was prepared by the College of Arms, describing it as a "Panther’s head couped full-faced spotted various with flames issuing from his mouth". And in 1523, the second crest featured a "demi-archer bearded and couped at the knees from his middle, a short coat, paly argend and gule, at his middle a quiver of arrows, drawn to the head". As for the family motto, Sir John chose the fateful words uttered by his son as he took aim at the panther with his bow. 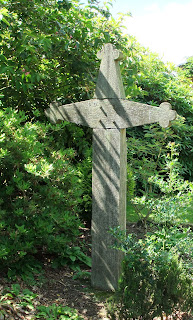 Giffard's Cross, marking the spot where an escapee panther was allegedly shot during the early 1500s (Dr Karl Shuker)

A wooden cross – nowadays known as Giffard's Cross - was erected at the precise site of his victory, but during the 20th Century it was moved for safe keeping into the grounds of the house, and a replacement was erected in its stead, which is readily visible from the public road running just in front of it. Not living very far away, I visited it one sunny Sunday afternoon during summer 2011, and was pleased to have seen for myself this tangible link to that dramatic cryptozoologically-linked episode of long ago.

Like so many episodes of this nature, however, it wouldn't be cryptozoological without having some degree of mystery or controversy surrounding it – and in this particular case, the mystery concerns the precise identity of the escapee cat. Just what was it? It is only ever referred to in historical accounts as a panther, but whereas modern-day usage of this term, at least in the UK, tends to be confined almost exclusively to the melanistic morph of the leopard Panthera pardus, i.e. the black panther, in medieval times 'panther' was also used in relation to the leopard's normal spotted version. So was it a black panther, or was it a spotted leopard – or even, as at least one account read by me has claimed, a jaguar? (The panther appears as a white-faced cat in the Giffard family crest, but as heraldic beasts are often very different in appearance from their real-life namesakes, this does not provide a solution.) Most extreme of all, as also suggested by some researchers, is that the entire episode is an invention, nothing more than local folklore? If that were true, however, how can the panther head on the Giffard family crest be explained - just a coincidence? Rather like the Giffard panther itself, this is one crypto-mystery that seems destined to run and run!

Just for fun, this delightful artwork portrays a very different kind of alien big cat!! (William Rebsamen)
This ShukerNature article is excerpted from my latest book, Cats of Magic, Mythology, and Mystery (CFZ Press: Bideford, 2012).
NB - A Buy It Now button for pre-ordering my book should be available here and on my website very soon, so please check back often!