TALES OF A TAIL - LEGENDS OF THE SIAMESE CAT

Publication of my latest book, Cats of Magic, Mythology, and Mystery (CFZ Press: Bideford, 2012), is now imminent, so for the next few days until it is available to pre-order, ShukerNature will be presenting a series of short excerpts as appetisers for the main course! And here's the first one:

It has been said that all the elusive magic and mystery of ancient Siam dwells within those twin moons of sparkling sapphire through which its most famous feline ambassadors gaze inscrutably upon the modern-day world.

It should come as no surprise, therefore, to learn that a creature of such singular morphology as the Siamese cat has inspired a veritable pageant of exotic legends and lore, elucidating and celebrating each of its most characteristic physical features.

Foremost among these must surely be the Siamese's famous kinked tail - nowadays selected against by breeders but epitomising earlier examples - whose origin is the basis for several charming stories. For example: one warm morning a beautiful Siamese princess decided to bathe in the palace garden's cool lake, so she threaded her valuable golden rings onto the long sleek tail of her beloved cat for safekeeping until she returned.

Unfortunately, the smooth rings persistently slid down the cat's tail and seemed destined to be lost - until he cleverly crooked the tip of his tail, thereby holding them securely in place. As the day was so warm, however, the princess did not return as swiftly as she had planned - several hours passed before she came back to her faithful cat and unhooked her rings from his tail. By this time, it had become very cramped, and the cat was overjoyed at the prospect of being able to straighten it again - but when he tried to do so, he discovered to his horror that it would not straighten. It had stiffened, permanently - and all Siamese cats from then on were born with a kink in their tail.

The Siamese cat’s kinked tail has inspired many myths

According to a different story, a sacred goblet had been stolen from one of Siam's temples, and a pair of Siamese cats set off into the surrounding woodlands to search for it. After a time, they found it, discarded near to some bushes, so the male cat trekked back to the temple to report their discovery, leaving behind the female cat to guard the precious goblet. This she did, tightly grasping its long slender stem with her tail until her mate should come back. Several days later, he duly returned - and found to his great surprise that she had given birth, to five beautiful kittens, but each with a kink in its tail.

Staring too intently at the Buddha's magnificent golden goblet, incidentally, is mythology's explanation for another of the Siamese's erstwhile characteristics - its squint. Once again, however, this trait is not favoured by modern-day breeders.

A third tale of its tail claims that a Siamese cat deliberately kinked it in order to remember something (but everyone seems since to have forgotten what it was!); whereas yet another version asserts that long ago one of these cats decided to go fishing using its tail as a fishing rod, and kinking the tip to use as a hook! Whether it caught anything is not recorded!

Indeed, like everything else concerning this enigmatic entity, the truty is likely to remain hidden forever amid the intricate intermingling of reality, reverie, and romance that has enveloped the Siamese cat since the earliest of times. 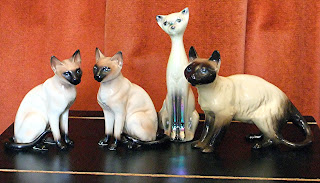 Some of my Siamese cat ornaments (Dr Karl Shuker)

NB - By the end of this week, a Buy It Now button should be available for my book, which I will be incorporating here and on my website, so keep a lookout for it!