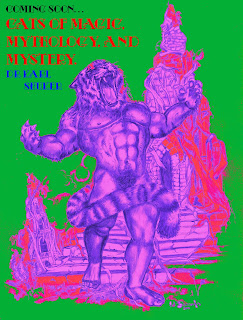 Other than the white were-tiger and Mowgli/Shere Khan illustrations, all of the truly spectacular artwork included here is by my friend Pat Burroughs, who is an awesomely talented artist - thanks Pat!!


Here is another appetiser for my forthcoming book Cats of Magic, Mythology, and Mystery (CFZ Press: Bideford, 2012):

The tiger is such a spectacular, awe-inspiring creature that we should not be surprised to discover that it has inspired legends of some truly extraordinary entities in which tigers and other species, notably humans, have become inextricably interwoven.

Particularly bizarre is the elephantiger - for as its name suggests, this exceedingly crossbred cat-monster combines the snarling head of a ferocious tiger with the lumbering body of a rampaging elephant. One version is depicted at Udaipur in India. Another, according to legend, frequented the forests of Thailand. 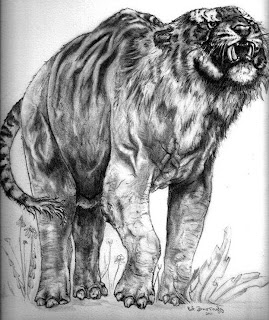 Long ago, the Thai elephantiger was lured into a specially-prepared pit by three highly-skilled hunters and was presented to King Phan of Nakhon Pathom, who utilised this unique monster's services in the creation of an incomparably valiant race of war elephants, with which he defeated his longstanding enemy - the memorably-named King Kong of Chaisi.

Whether the king would have been so successful in defeating the kirata, conversely, is another matter - for these savage semi-humans of northeastern India possess the legs of humans but the heads and torsos of tigers. The male kirata are rapacious man-eaters, whereas the golden-skinned females are voluptuous vamps, who alluringly entice unwary human suitors to their doom amid the dark, inviting seclusion of their forest domain.

The kirata should not be confused with were-tigers, which are humans said to possess the ability to transform themselves into tigers. They occur in the traditional folklore of many native people throughout the tiger's original zoogeographical range in Asia. In India, for example, it was believed that such persons were evil sorcerers, whereas in China they were thought to be people afflicted by a hereditary curse or by malign ghosts. In Thailand, an especially murderous man-eating tiger may become a were-tiger in time, whereas in Malaysia and Indonesia a special type of relatively benevolent were-tiger known as a harimau jadian supposedly acts as a guardian of plantations and is only dangerous to humans if hungry or seeking revenge. 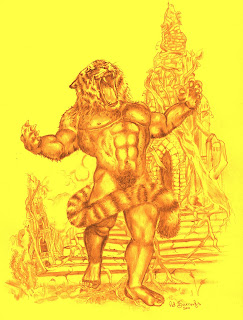 In Sumatra, weretigers are known as cindaku or harimau cindaku, and in a fascinating article on this subject published in the CFZ Yearbook 2007 Jon Hare reported the traditional Sumatran description of these entities as follows:

"Sumatrans say that a group of human beings exist with the ability to turn into tigers. They are seemingly normal in every other way but they can be identified by a single physical peculiarity: they all lack the channel in the upper-lip [the philtrum]. Most of the time the cindaku stay in human form and live just like any other people, but at certain times of the year they abandon their homes and head off to hunt. When a hunting cindaku arrives at a neighbouring village, he will stay in human form, entreating the villagers to allow him to stay the night. If the locals are not wary and do not notice that he lacks the channel in the upper lip, the tiger will transform in the night and devour them all; in the morning, all that will be found are bones. The cindaku will have melted back into the jungle."

The presence of a physical characteristic betraying a were-tiger's true identity is a very common feature in the folklore of human shape-shifters throughout the world. Other famous examples include the presence of a blow-hole on the top of the head in the boto or Amazonian were-dolphin's human form that he seeks to hide by wearing a large hat; and the tenacious presence of algae and other aquatic detritus in the hair of the Scottish kelpie's human form (and sometimes hoofed feet too).


A stunning portrayal of a white were-tiger (Killmatthew33/Deviantart.com)

Accounts of children reared by wild animals are not limited to fictional examples like Mowgli of Rudyard Kipling's two Jungle Book novels and the classical legend of Romulus and Remus. Over the centuries, many fully authenticated true-life cases have been documented and studied, but perhaps the most astounding of these was reported in the Morning Post, a London newspaper, on 31 December 1926, and subsequently referred to in passing by Charles Fort in his book Lo! (1931).

This remarkable case, which may well be unique even within the ever-surprising annals of feral children, came to the attention of a Indian magistrate during the first decade of 20th Century. While he was serving at that time in the Central Provinces, a ferocious man in his 40s was dragged before him in chains, roaring and raging in such a violent, scarcely controllable manner that the greatly shocked magistrate made enquiries concerning his background - and thereby uncovered the astonishing secret of the man's past.

Many years earlier, some villagers in this region had come upon a large tigress, accompanied by two cubs and what, to their amazement, appeared to be a human boy! As they peered closer, they could see that it was indeed a boy, 5-6 years old, and so they captured him and took him back to their village, where they confined him in one of their huts. His adoptive mother did not forsake her 'cub' so easily, however, because for several nights afterwards the tigress would enter the village and prowl agitatedly around the hut containing him, until in fear for their own safety the villagers finally killed her.

From then on, the boy was reared by the head villager, and ultimately acquired human characteristics, but possessed a ferocious temperament, and was able to walk unafraid and unmolested among wild tigers in the jungle. The boy had eventually grown up into a man - the very same man who was now standing in chains before the magistrate. 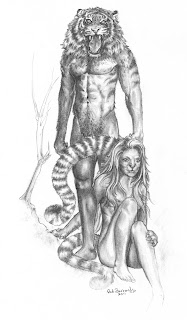 A pair of kirata (Pat Burroughs)

If other cases of true-life feral tiger-men have also occurred in the past, it is not difficult to understand how legends and folklore of half-human, half-tiger entities such as the kirata and shape-shifters such as were-tigers arose.

This ShukerNature post is an adapted excerpt from my latest book Cats of Magic, Mythology, and Mystery (CFZ Press: Bideford, 2012).