One of the best-known creatures of classical mythology is Pegasus – the flying horse who sprang into existence (along with his human brother, Chrysaor) from spurts of blood gushing forth from the neck of the snake-haired gorgon Medusa when Greek hero Perseus beheaded her with his sword.

Much less famous than Pegasus, conversely, but often confused with him on account of their similar name are the subjects of this present ShukerNature blog – the pegasi or horse-headed birds, fabulous entities variously claimed to occur in Scythia or in Ethiopia. 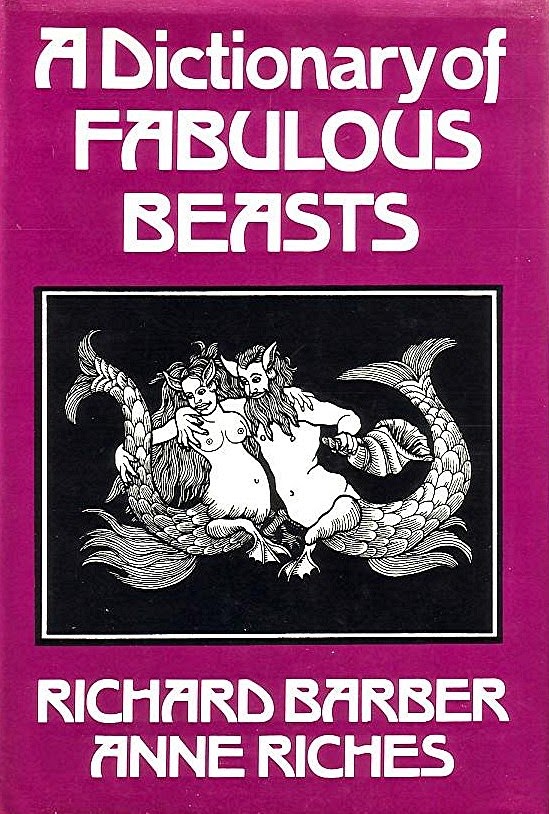 A Dictionary of Fabulous Beasts by Richard Barber and Anne Riches

And so it was that, many years ago when still a teenager, I first learnt of the pegasi (aka pegasy and pegasies) from the briefest of sources – the following single line that appeared in A Dictionary of Fabulous Beasts (1971), written by Richard Barber and Anne Riches:

Pegasi   Horse-headed birds found in Scythia; Pliny, who reports their appearance, regards them as fabulous. (118)

In classical times, Scythia was the name given to a region encompassing much of present-day Eastern Europe and Central Asia. As for the bracketed 118, this referred to a numbered reference in this book's bibliography, the reference in question being Dr John Bostock's translation from 1855 of the encyclopaedic Naturalis Historiae (aka Historia Naturalis) - the multi-volume magnum opus of Roman naturalist-historian Pliny the Elder (23-79 AD).

I was able to obtain a copy of Bostock's translation via Britain's indispensable inter-library loans service, and I discovered that the lone line documenting the pegasi in the fabulous beasts dictionary by Barber and Riches was simply a paraphrasing of Pliny's original statement - which opened Chapter 70 of his encyclopaedia (a chapter dealing with fabulous birds), and read as follows:

"I look upon the birds as fabulous which are called "pegasi," and are said to have a horse's head; as also the griffons, with long ears and a hooked beak. The former are said to be natives of Scythia,1 the latter of Aethiopia."

The superscript 1 referred to a footnote by Bostock that stated:

"Scythia and Ethiopia ought to be transposed here, as the griffons were said to be monsters that guarded the gold in the mountains of Scythia, the Uralian chain, probably."

Otherwise, nothing new there. (NB - In classical times, Ethiopia referred to much of East Africa, not just the present-day country bearing this name.)

An engraving from 1663 of a griffin with ears

Moreover, despite perusing countless books and published articles on mythological animals in subsequent years, I never encountered any additional mention of pegasi. So the decades slipped by while visions of horse-headed birds periodically flapped on heavy wings across the horizon of my mind but never alighted long enough in my consciousness to induce me to investigate them any further – until quite recently, that is, when, after recalling these semi-equine enigmas yet again, I decided that it was time to pursue the pegasi online. So I did - and here is what I found out about them.

Pliny the Elder was not the only classical scholar to document the pegasi. Preceding his Naturalis Historiae was a short treatise written in c. 43 AD by Rome's earliest geographer, Pomponius Mela, entitled De Situ Orbis Libri III – which Pliny used as a major authority for the geographical sections in his own publication. And both Mela's treatise and Pliny's encyclopaedia were used as sources of material by the 3rd-Century compiler and grammarian Gaius Julius Solinus in his own master-work, De Mirabilibus Mundi (translated as The Wonders of the World). Interestingly, Pomponius Mela and Solinus merely stated that the pegasi sported horses' ears – it was Pliny who claimed that they were horse-headed. Also, the two former authors reported that these birds lived in or near a lake.

So far, however, whether horse-headed or horse-eared, the pegasi have been deemed to be entirely mythical, with no more basis in reality than their winged steed namesake, Pegasus. But is it possible that they actually constituted a distorted or embellished account of a genuine, bona fide species of bird? In his book Birds in the Ancient World from A to Z (2012), W. Geoffrey Arnott includes a short account of the pegasi, and, accepting Bostock's suggestion in his translation of Pliny's encyclopaedia that these birds were native to Ethiopia, not Scythia, he notes that there are no less than three relatively common species of East African bird with erect, pointed crests resembling a horse's ears that perch in lakeside trees. Namely, the long-crested eagle Lophaetus occipitalis, the spotted eagle owl Bubo africanus, and the white-bellied go-away bird Corythaixoides leucogaster. So could one of these be the identity of the pegasi?

Personally, I consider it improbable that either of the first two species would make a plausible candidate, simply because eagles and owls would already be very familiar birds to classical European scholars, and therefore it seems doubtful that even via several retellings between original observation and subsequent documentation a Chinese whispers process could convert either of these into a horse-eared (or –headed) avian anomaly. Conversely, the third species named might be a more plausible candidate, because go-away birds would be far less familiar to European scholars as they are confined entirely to tropical Africa, and are totally unlike any European bird in appearance. Consequently, a go-away bird's appearance could become distorted much more readily by the Chinese whispers process (click here for a ShukerNature article concerning go-away birds).

In addition, one Twitter correspondent suggested that a hornbill might make a promising candidate for the pegasi, and there is no doubt that certain species of hornbill do possess a vaguely horse-headed appearance, due to their huge, burly beaks, which at a distance could resemble a horse's muzzle. Moreover, one species that is especially reminiscent of the pegasi just so happens to be a native of Ethiopia - namely, the Abyssinian ground hornbill Bucorvus abyssinicus. One of the two largest species of hornbill anywhere on the world, it has been specifically recorded from the immediate vicinity of Ethiopia's Lake Langano, thereby fulfilling another pegasi requirement as a plausible candidate - living by a lake.

Ultimately, however, it seems unlikely that we shall ever know for certain whether the pegasi do have a basis in ornithological fact as well as a presence in classical fable.

Man riding a hippalectryon - damaged depiction on the interior of an Attica black-figure lip cup, 540–530 BC (public domain)

Interestingly, the pegasi are not the only horse-birds on record. There is also the hippalectryon to consider. No less obscure than the pegasi, this yellow-plumed composite beast from ancient Greek folklore is variously said to have combined the wings, legs, and tail of a cockerel (most frequently), an eagle, or a giant vulture with the head and forequarters of a horse, and could apparently be tamed and ridden by anyone brave enough to attempt this daunting feat. It is represented, sometimes bearing a bold rider, in several pieces of ancient art, including vases, statues, and coins, most commonly dating from the 6th Century BC; but the oldest known example - an askos (liquid-pouring pottery vessel) from Knossos - dates from the 9th Century BC.

Finally: horse-bird composites are assuredly the stuff of dreams, especially any dreams that can be designed by those skilled in the illusive arts of Photoshop - so here is a truly delightful example to leave you with: 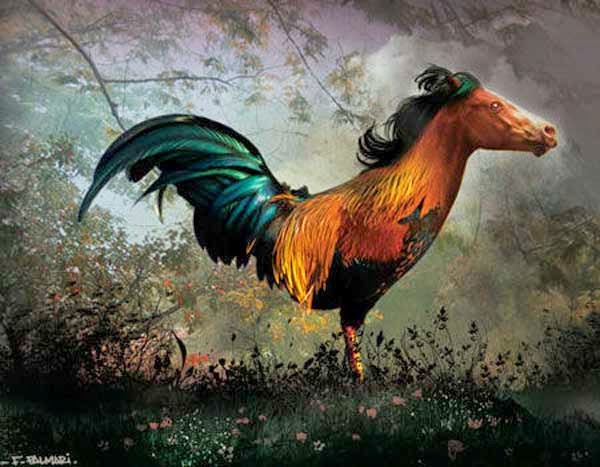 (original source/copyright owner unknown to me)