A GIANT MYSTERY SALAMANDER FROM CALIFORNIA, AND A GIANT VERY SILLYMANDER FROM VIETNAM 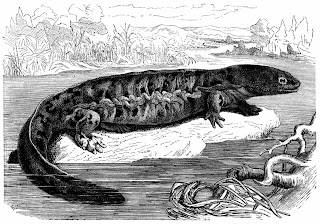 Only the Chinese giant salamander Andrias davidianus (up to 6 ft long) and its Japanese relative A. japonicus (up to 5 ft long) are bigger than North America's largest known salamander species - the hellbender Cryptobranchus alleganiensis. Officially confined to the eastern United States, the hellbender can attain an impressive total length of up to 2.5 ft. However, as I have previously documented on ShukerNature (click here), and in my book In Search of Prehistoric Survivors (1995) too, there are also some very intriguing unconfirmed reports on file attesting to the supposed existence in the western United States (in particular California) of mysterious salamander-like creatures that are allegedly even bigger than the hellbender.

Unfortunately, these reports generally date back many years, suggesting that even if such animals did once exist there, they no longer do so – which is why I was very happy to receive recently the following first-hand details concerning a most interesting 21st-Century sighting of an apparent giant salamander in California, but which have never been made public…until now. 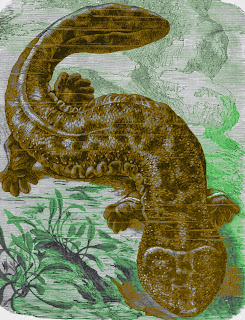 The details were sent to me by the eyewitness in question via a series of emails, which she has kindly given me permission to document publicly as long as I do not release her name (which I have on file). So I shall simply refer to her here as Prunella (not her real name).

I received Prunella's first email on 1 March 0f this year, which read as follows:

"In 2005 I saw a giant salamander or newt walking along a path in Redwood Park in Arcata, California. It was reddish brown mottled and was 4-5 feet long, it was huge. I had a 10 year old boy with autism that is nonverbal and my cell phone didn't have a camera. It had just rained and was early in the morning. The creature was walking slowly and was all the way off the ground it didn't have a flat head like those other giant salamanders. It really looked more like a newt but all the newts I saw when I googled were so small. I just have no clue what this was and I have always wondered about it. I was so close to it I could have touched it so there is no mistaking what I saw. I just wish I had my iPhone then. There must be more people that have seen it but have no way of reporting things like this. I just hope they are really discovered and then protected."

I swiftly emailed Prunella back, requesting more details concerning this remarkable creature's morphology. I also included two links to videos currently accessible on YouTube – one showing some hellbenders (click here), the other showing a Japanese salamander on land (click here), and I asked her if her mystery beast resembled either of these known species. On 6 March, I received her second email:

"Thank you for replying back! I watched the videos that you sent and the salamander I saw was so much bigger than the hellbenders and it looked different. It didn't have that weird ruffled skin and it walked off the ground. The colors that it had looked similar to this [she enclosed a photograph of a Californian coastal giant salamander Dicamptodon tenebrosus, see below] but not exactly the same." 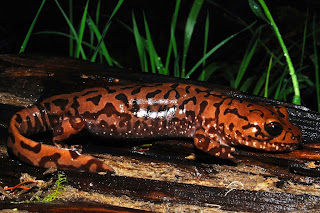 The photograph that Prunella enclosed with her first of two emails sent to me on 6 March 2015, and which she'd accessed here on the Fieldherpforum website (© Mike Rochford/Fieldherpforum.com)

"The shape of it was like this one too with how the head and tail looks except that the legs were a lot bigger to carry the weight of the creature. I really want someone to find one of these again. I told one of the girls at work about it and she told me her boyfriend saw one in brush that he was clearing that was about a foot shorter than the one I saw. I'm not sure where he saw it though. I have taken many walks in the forest hoping to see it again but no luck. How long do salamanders live? Are they like tortoises where they keep growing and growing? Redwood Park is part of the community forest and goes for acres and acres so I think it's possible that there are animals in there that people just don't know about.

"Please tell my story. I hope that more people have information about this and I would love to be kept in the loop. Can you please leave my name out of it though?

After receiving from me some emailed answers to her questions plus various additional queries of my own, Prunella sent me a further email later that same day:

"The day that I saw this creature was a very wet day. It had just rained so everything was wet. Also, the redwood forest is usually very damp and there are streams everywhere. The brush would also be very damp in a forest like this so I can see why a salamander would be living in brush in a redwood forest. The skin of this thing was smooth and looked wet and slimy, it didn't have any scales at all. I really don't think it was a lizard.

"Maybe its legs were just more sturdy because it needed to walk around a bit and had to develop them to hold its huge body. Maybe it was an adaptation so it could walk around and look for slugs to eat or something. I hope more people have seen it and reply to your letter. I really want to get to the bottom of this."

Judging from her detailed, three-email report of what she had seen, there seems little doubt that if her testimony is true (and I see no reason to doubt it), Prunella did indeed encounter some unexpectedly large form of salamander (as opposed to a lizard) in Arcata, California's Redwood Park, but what could it have been?

Seemingly not an out-of-place hellbender, judging from the clear differences from this latter species as outlined by her; and the chances of it being either a Japanese or a Chinese giant salamander that had somehow absconded from captivity seem highly remote – if only because these species are so rare and hence so seldom maintained in captivity that if there was such a creature in this area that had indeed escaped, its owner would surely have quickly alerted the authorities in a bid to locate and recapture this highly valuable animal with all speed. As for the species whose photo she'd enclosed with her second email, namely California's coastal giant salamander Dicamptodon tenebrosus: notwithstanding its 'giant' appellation, this species barely exceeds 1 ft in confirmed total length – unless, perhaps, a few freakishly out-sized specimens also exist, currently unconfirmed by science?

Both Prunella and I would very much like to know if other people have seen a similar animal in this same locality or elsewhere in California (she did mention that the boyfriend of one of her work colleagues had allegedly seen a smaller specimen, though she didn't know where), so if you have done, I'd greatly welcome any details that you can post here or email to me privately – thanks very much. 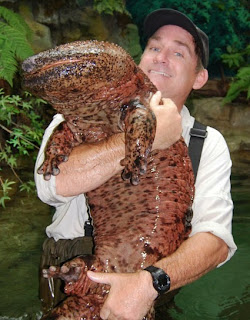 By sheer coincidence, only a week after I had received Prunella's initial email regarding her giant mystery salamander in California, an extraordinary story hit the headlines concerning the apparent capture of a giant mystery salamander in Vietnam – a country not known to harbour any such species. Not surprisingly, therefore, it attracted considerable interest online, but most especially on Facebook. For this where the story had begun, when in early March 2015 a 25-year-old Vietnamese man named Phan Thanh Tung had claimed on his Facebook page that he had pulled the mysterious 3-ft-long creature out of a pond near his home in northern Vietnam's Vinh Phuc region. He had also posted some top-quality colour photographs of it on his page.

These revealed that although the creature superficially resembled the larger giant salamander of neighbouring China, it exhibited various differences too, thereby perplexing local environment officials who had examined the photos, and spurring various other viewers into suggesting that it may represent an entirely new, hitherto-undescribed species. 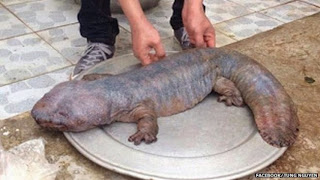 The officials, however, were not merely perplexed but also very alarmed, because Phan Thanh Tung announced that he had sold the animal (but would not reveal its new owner's identity or whereabouts) and at least one of his photos showed it alive but placed upon a large dining tray with a chopping board in disturbingly close proximity! As a result, the officials were so determined to track the animal down and save it that they called in the police to assist them in searching for it – always provided, of course, that the poor creature had not already been killed and eaten, as a number of social website commentators feared. (Tragically, Chinese giant salamanders remain a much sought-after culinary delicacy in their native homeland notwithstanding their IUCN status as a critically endangered species.)

Happily, however, this proved not to be the case – for the simple reason that the whole episode was soon exposed as a hoax. When summoned by police to an interview shortly after his story had made headlines worldwide, Phan Thanh Tung shamefacedly confessed that he'd made the whole thing up. As for the photos, he'd found them online and they had originally depicted a normal Chinese giant salamander, but after downloading them he'd edited them via photo-manipulation in order to create a creature that looked different from all known species, and had then uploaded them together with his fake story onto his FB page in order to attract some attention to himself – too much, as it turned out.

Not so much a salamander, then, as a sillymander, and a very silly one at that. 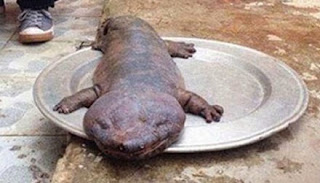