DROP BEARS, FEATHERED KANGAROOS, AND OTHER FRAUDULENT FAUNA DOWN UNDER 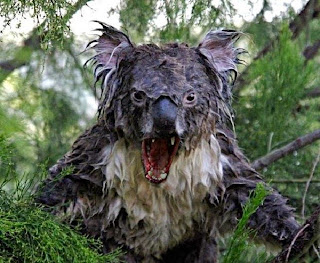 No country's corpus of traditional myths and folklore would be complete without also containing various tongue-in-cheek yarns concerning all manner of bizarre and sometimes deliciously deadly beasts that exist only in the twinkle of the storyteller's eye. And if those listening to these tall tales actually believe them, the twinkle becomes a veritable supernova!

Bearing in mind that even its authentic wildlife is truly extraordinary, it should come as no surprise to learn, therefore, that Australia's fauna of the fraudulent kind is particularly memorable, as demonstrated by the following selection of examples. 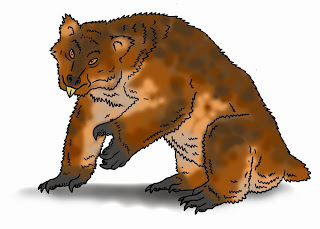 Artistic representation of the drop bear in life (© Tim Morris)

The most famous of these Antipodean ambiguities is the drop bear. Closely related to the koala but larger and darker in fur colour, the drop bear shares its cuddly appearance, but not its inoffensive nature. On the contrary, the drop bear is greatly feared by anyone journeying through heavily-wooded outback territory, because it is known to lie in wait on overhead branches, and should anyone walk unsuspectingly beneath, this monstrous marsupial will drop unerringly down upon and dispatch its hapless victim with its lacerating claws and savage teeth. The only way to ensure safe passage through drop bear-inhabited terrain is to smear Vegemite behind your ears, which should be more than sufficient to deter even the most voracious drop bear. 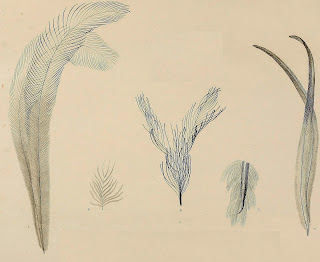 Do these kangaroo feathers look like emu plumes to you?  :-)  (public domain)

Less daunting and much more exotic is the feathered kangaroo. The main claim to fame of this elusive creature is that its long white plumes are used to decorate the head-dress of certain Australian soldiers, namely the Australian Imperial Force (AIF) light horsemen.

To the uneducated eye, these look remarkably like emu plumes, but when asked, the AIF themselves are happy to confirm, with straight faces manfully employed, that they are indeed kangaroo feathers. 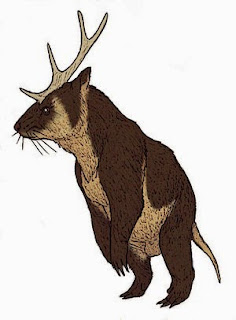 Artistic representation of the gunni in life (© Connor Lachmanec)

Whereas North America has the jackalope, Australia boasts the gunni – an eyecatching marsupial equivalent, consisting of a wombat sporting a showy pair of antlers. To date, however, only one example has been procured – the handsome taxiderm specimen, complete with striped back and hindquarters, plus a distinct tail, formerly on display in the visitors’ information centre at the tourist town of Marysville in Victoria. It was presented to the centre by local ranger Miles Stewart-Howie, together with a detailed account of this pseudo-species’ equally fictitious history, which was duly displayed alongside it.

Tragically, however, this unique specimen was destroyed when the centre burnt down during the major onslaught of bushfires that raged through Victoria during February 2009. 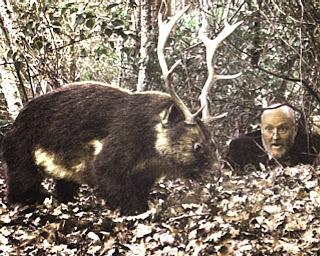 The only known preserved specimen of the gunni, now destroyed (© Ken Irwin)

Staying with the subject of fabricated fauna Down Under: According to local tradition, a peculiar fish inhabited a single water-hole in Queensland’s Burnett River. Superficially, it resembled the Australian lungfish Neoceratodus forsteri that also lived in this river, but was instantly distinguished from that latter species and indeed from all known fishes by virtue of its long flat spatula-shaped beak. 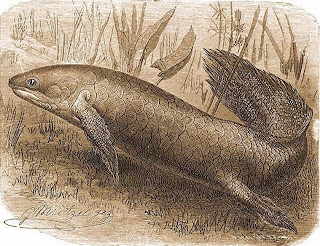 Dubbed the ompax by Australian ichthyologist Count Castelnau during the 1870s, a single specimen of it was eventually obtained, and its species was formally christened Ompax spatuloides. During the 1920s, however, the true nature of this specimen, and the ompax as a whole, was exposed, when a writer discovered that the specimen had been cleverly constructed from the body of a mullet, the tail of an eel, and the beak of a platypus! Exit the ompax from the ichthyological catalogue!

Sketches of the ompax from 1930 (public domain)

Incidentally: despite the fact that the drop bear is no more likely to be discovered than are any of the so-called 'fearsome critters' from North American lumberjack/frontier folklore (click here for three feline examples), this has not prevented it from being 'identified' by some as a possible surviving thylacoleonid or marsupial lion (which was distantly related to the koala). Nor has it prevented a number of websites labelling the photograph opening this present ShukerNature blog post as depicting a bona fide drop bear, though I strongly suspect (or at least hope!) that they did so merely in jest, not as a serious statement of assumed fact.

What this startling photograph (popularly dubbed the 'Angry Koala') does portray is a very wet koala, but no genuine koala has jaws like those snarling in savage fury at the camera. In reality, they are the jaws of some carnivorous creature that have been deftly added by person(s) unknown via photo-manipulation techniques to a photograph of a normal koala that was snapped on 30 January 2009 by an Australian photographer with the Flickr username Oz_drdolittle. It was one of three koalas sitting in a tree near his home in Adelaide, South Australia, during a 12-day heatwave, and which his garden's water sprinklers sprayed with water, thereby enabling them to cool them off. Below is his original, non-manipulated photograph, sans snarling jaws, and click here for his Flickr page that contains full details and additional photographs of what is now a world-famous koala, thanks to both its original unmodified picture and its drop bear 'alter ego' version having gone viral online during the past 6 years. 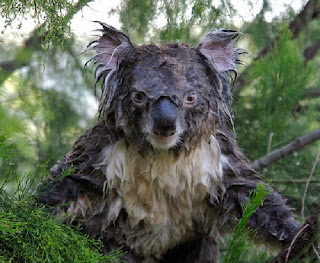