FROM DEVILISH GECKO TO DERIVED DRAGONET - YET ANOTHER PHOTO-MANIPULATED METAMORPHOSIS 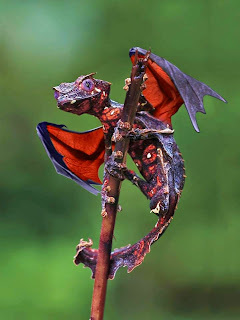 The photograph opening this present ShukerNature blog article has been brought to my attention on numerous occasions with requests as to whether the animal that it depicts is real.

Some have wondered whether it may be a species of flying dragon Draco sp. – i.e. one of those famous little agamid lizards (up to 8 in long) native to southeastern Asia whose greatly elongated ribs are connected to one another on each side of its body by a wing-like membrane that enables the creature to glide passively (though not actively fly) through the air after leaping from the trunk or branch of a tree. 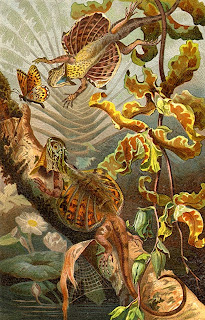 I have even received enquiries as to whether this photograph was of a real species of dragon, or, alternatively, some gliding lizard-like reptile that had mysteriously survived from prehistoric times into the present day. None of these options is correct, of course, though there were indeed at least three notable and very different types of gliding lizard-like reptile alive at one time or another in the ancient world.

Although unrelated to the modern-day Draco agamids, Kuehneosaurus latus was outwardly similar, inasmuch as it too possessed wing-like gliding membranes consisting of elongated ribs interconnected on each side by a membrane. However, recent aerodynamic studies indicate that it used these 'wings' not for gliding but rather for parachuting. Up to 2.3 ft long, this species was formally described and named in 1962 by P.L. Robinson, and existed in southwest England during the late Triassic Period, around 237-201 million years ago. 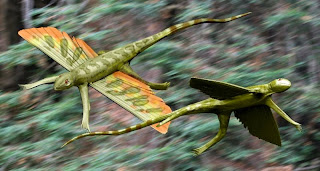 So too did a much longer-'winged' relative, Kuehneosuchus latissimus, also formally described in 1967 by Robinson, although some researchers have suggested that this latter species may simply have been a sexual morph of Kuehneosaurus, but adapted for true gliding rather than merely parachuting. These two species (if indeed they are separate species) are the most advanced members of the small taxonomic family Kuehneosauridae, which is housed within a long-extinct order of archaic reptiles known as eolacertilians or dawn lizards.


A more basal species was Icarosaurus siefkeri, known from a single specimen found in 1960 by teenager Alfred Siefker while exploring a New Jersey quarry, and came from the Lockatong Formation. It is housed in New York's American Museum of Natural History. 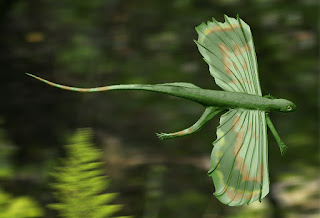 A second type of prehistoric lizard-like glider but fundamentally different from any other currently known to science was Coelurosauravus, a genus of basal diapsid reptile containing two species – C. elivensis (described in 1928) and C. jaekeli (described in 1930). Around 16 in long in total length, these also possessed a pair of wing-like gliding membranes, but the membranes' struts were not elongated ribs. Instead, they were lengthy rod-like structures constituting newly-evolved dermal bones, unique to this reptilian genus.

The two species variously lived in what is now England, Germany, and Madagascar during the late Permian Period, approximately 260-250 million years ago. Fans of the science-fiction television series Primeval will know that the aerial reptile kept by the team as a pet and named Rex is a Coelurosauravus, though Rex is much bigger than known specimens, and is also capable of active, powered flight, whereas real Coelurosauravus species could only glide passively. 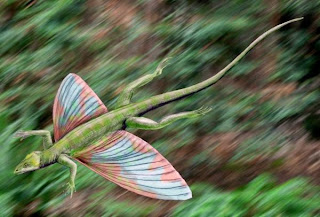 Very different again was a third type of prehistoric gliding lizard-lookalike – Sharovipteryx mirabilis, formally described in 1971 and known only from its holotype, which had been discovered in 1965 in the Madygen Formation, Dzailauchou, on the southwest edge of the Fergana valley in what is now the independent Asian country of Kyrgyzstan. It dates from the middle-late Triassic Period, approximately 225 million years ago.

What makes this species so distinctive is that unlike all other reptilian gliders, its gliding membranes surrounded its pelvic girdle. It belonged to the taxonomic order Protorosauria. 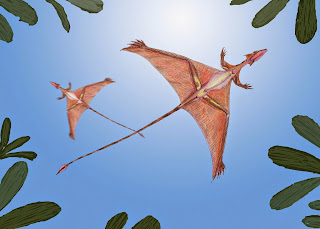 But as the dragonet in the photograph opening this ShukerNature article is none of these creatures, what exactly is it?

In fact, it is a gecko, but not one that has ever been breathed into life by either Mother Nature or evolution. Its species is the satanic leaf-tailed gecko Uroplatus phantasticus, named after its somewhat devilish, fantastical appearance and its leaf-like tail. Formally described in 1888 by prolific English zoologist George A. Boulenger, and indigenous to Madagascar, it is the smallest species of leaf-tailed gecko within the genus Uroplatus, measuring only 2.6-6 in long in total length.

Needless to say, however, although it is certainly very eyecatching morphologically, this does not extend to its possessing wings. When I saw the dragonet photograph a while back, I recognised straight away that it was merely a novel photo-manipulation of some original photograph of U. phantasticus. Consequently, it did not take long for me to uncover the latter online, which turned out to have been been snapped by Piotr Naskrecki. And here it is, alongside its derived dragonet: 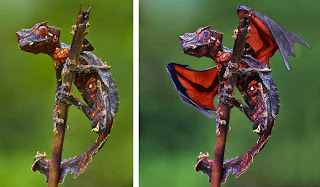 Another longstanding internet hoax picture is duly unmasked, though whoever is responsible for creating it from the gecko photograph remains unidentified.

My thanks to Facebook friend Carl Kelsall for most recently bringing the dragonet photograph to my attention and, in so doing, inspiring me to pen this exposé. 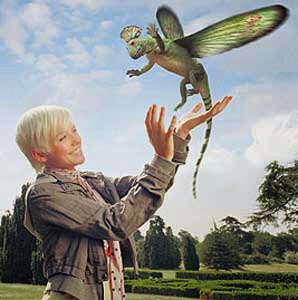