HORNING IN ON INDONESIA'S SCALY RHINOCEROSES 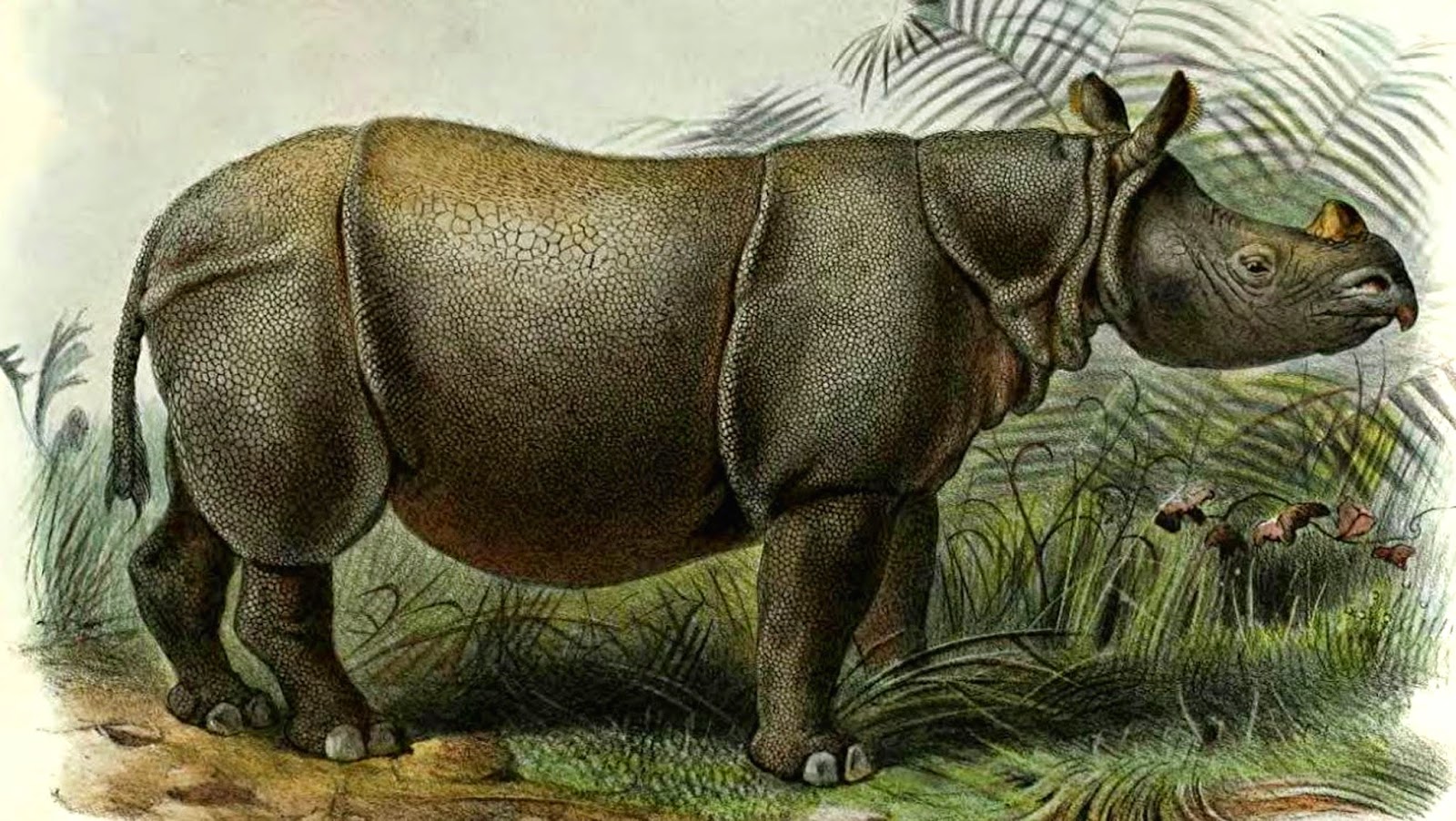 Chromolithograph of a female Javan rhinoceros imported by London-based animal dealer Charles Jamrach from the Sunderbans in India to London Zoo, where, sadly, it only lived for just under 6 months in 1877 (public domain)

In 1941, Willy Ley noted in his book The Lungfish and the Unicorn that at some stage during the middle portion of the 1920s, a Dr P. Vageler - regularly contacted by zoos wishing to replenish their animal collections - was seeking some specimens of the Asian rhinos when he met up with J.C. Hazewinkel, a noted big game hunter. After learning that Vageler required new rhinoceroses, Hazewinkel showed him some photos of eight that he had shot in Sumatra, and which appeared to be new in every sense of the word. For the type that they represented — although familiar to the natives, who called it 'badak tanggiling' (translated as 'scaly rhinoceros') - seemed to differ greatly from the form familiar to Vageler on Sumatra.

Unlike the known, two-horned Sumatran rhinoceros Dicerorhinus sumatrensis, the badak tanggiling bore just a single horn. If this had been the only difference, it could have been explained as a mere freak of nature. However, Hazewinkel stated that the female badak tanggiling was often totally hornless, and that the form as a whole had scaly armour and attained a length of 10 ft. In contrast, the female Sumatran rhinoceros is rarely if ever hornless, and the species as a whole is hairy rather than scaly and only attains a length of 8—9 ft. 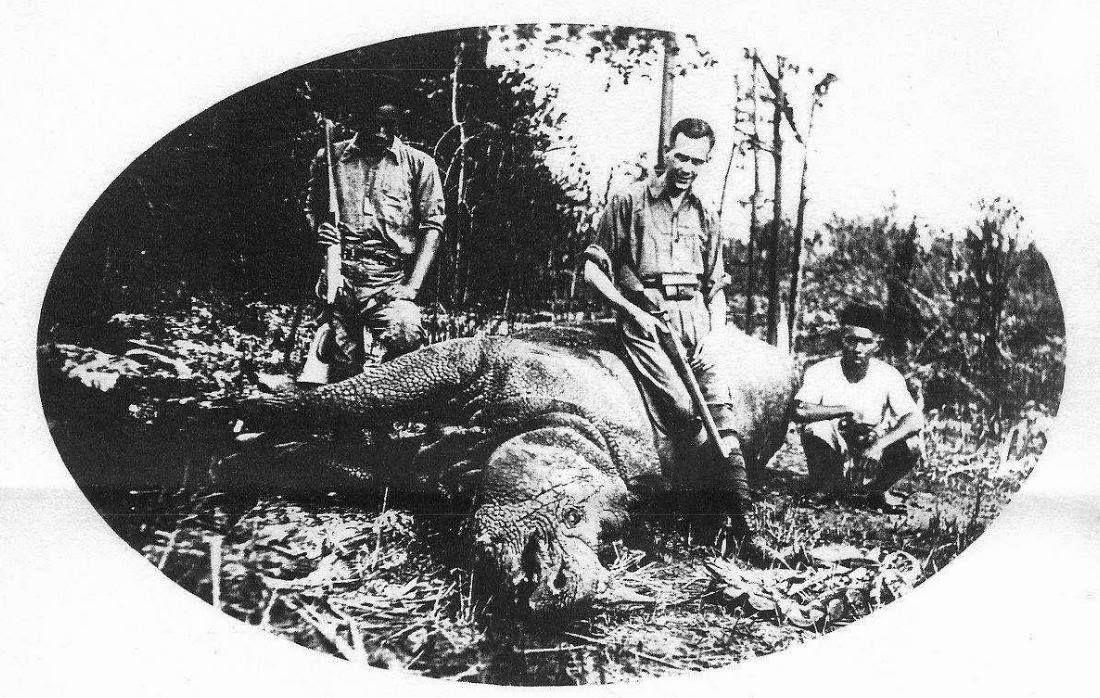 J.C. Hazewinkel posing on the carcase of the first in the series of Javan rhinoceroses shot by him in Sumatra (public domain)

As Dr Vageler readily recognized, the Sumatran rhino thus became an unlikely candidate for the badak tanggiling’s identity. In his coverage of this episode, Willy Ley stated that Hazewinkel’s photos convinced Vageler that a second species of rhinoceros existed on Sumatra, and that in reply to his requests Vageler was promised living specimens of it to send on to various zoos worldwide, but they never arrived. Ley concluded his account by stating that the badak tanggiling therefore remains a shadow in our zoological encyclopedias, but: “...it may, however, be rediscovered almost any day”.

From all of this it would seem that Ley considered the badak tanggiling to be a wholly unknown, undescribed species. In fact, its identity is surely no mystery, for this enigmatic creature is clearly Rhinoceros sondaicus, the Javan rhinoceros. Not only is it of comparable size to the badak tanggiling, has characteristically scaly armour, and is a one-horned species whose females are indeed sometimes hornless, but at the time of Vageler and Hazewinkel it did exist on Sumatra (but this was not widely known outside scientific circles). Indeed, the last known Sumatran specimens of the Javan rhino did not die until World War II. 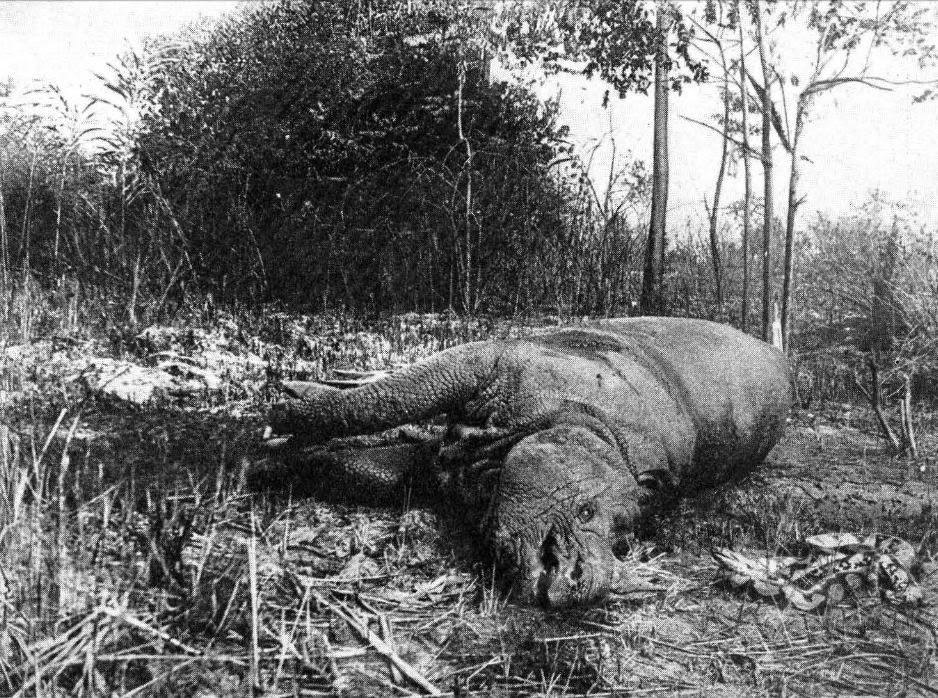 There is a further, more specific, piece of evidence confirming this identification. On 23 December 1933, the Illustrated London News published an article by Hazewinkel, in which he described his pursuit and shooting of the first of eight specimens of large, scaly, one-horned rhinoceros on Sumatra during the mid-1920s. The photos of the animal dispel any doubt as to its identity - one that Hazewinkel, moreover, freely announced. It was a Javan rhinoceros. Indeed, echoing the general unawareness concerning the existence of this species on Sumatra at that time, Hazewinkel had entitled his article ‘A One-Horned Javanese Rhinoceros Shot in Sumatra, Where It Was Not Thought to Exist’. 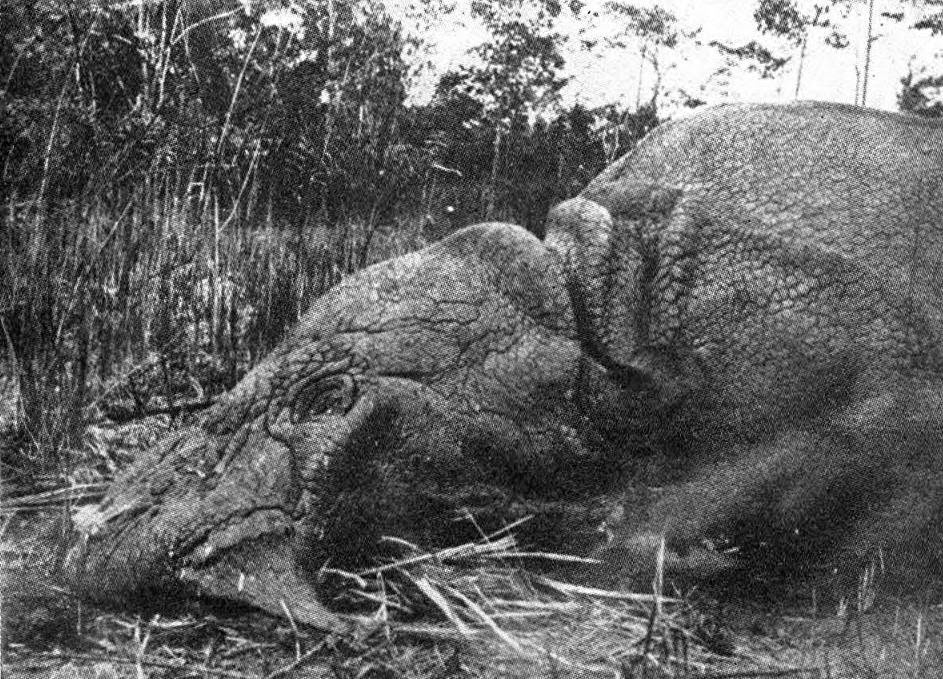 Clearly, there can be no question that those eight Javan rhinos shot by Hazewinkel on Sumatra in the mid-1920s are one and the same as the eight Sumatran badak tanggiling shot by him and mentioned to Vageler by him during that same period. Moreover, as I discovered when researching this subject further, in 1926 Vageler actually published a short paper in Berliner Illustrirter Zeitung (plus two others a year later in Science News-Letter and Umschau) in which he formally described Sumatra's Javan rhinoceros merely as a new variety (not even a new subspecies) of the Javan rhinoceros, naming it Rhinoceros sundaicus [sic] var. sumatrensis. 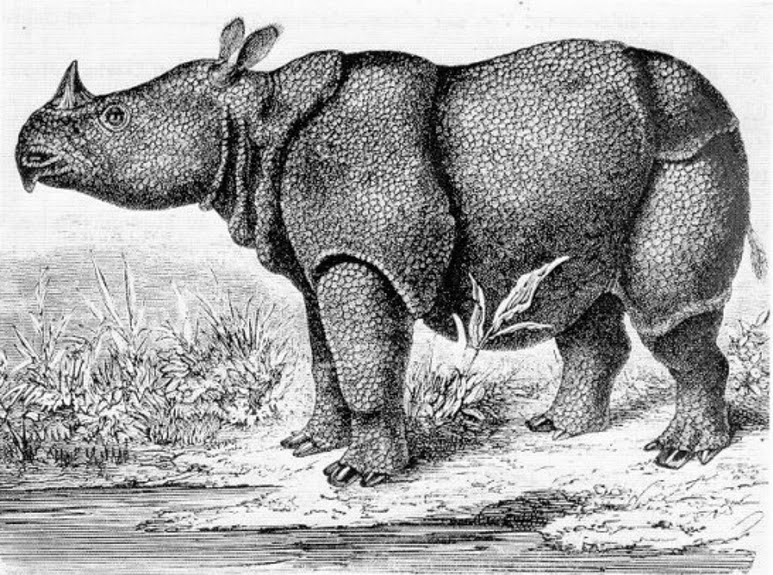 Evidently, therefore, in spite of Ley's apparent assumption to the contrary, Vageler did indeed recognise that Sumatra's one-horned rhinoceros belonged to the Javan rhinoceros's species, and was not a separate, hitherto-unknown species at all. 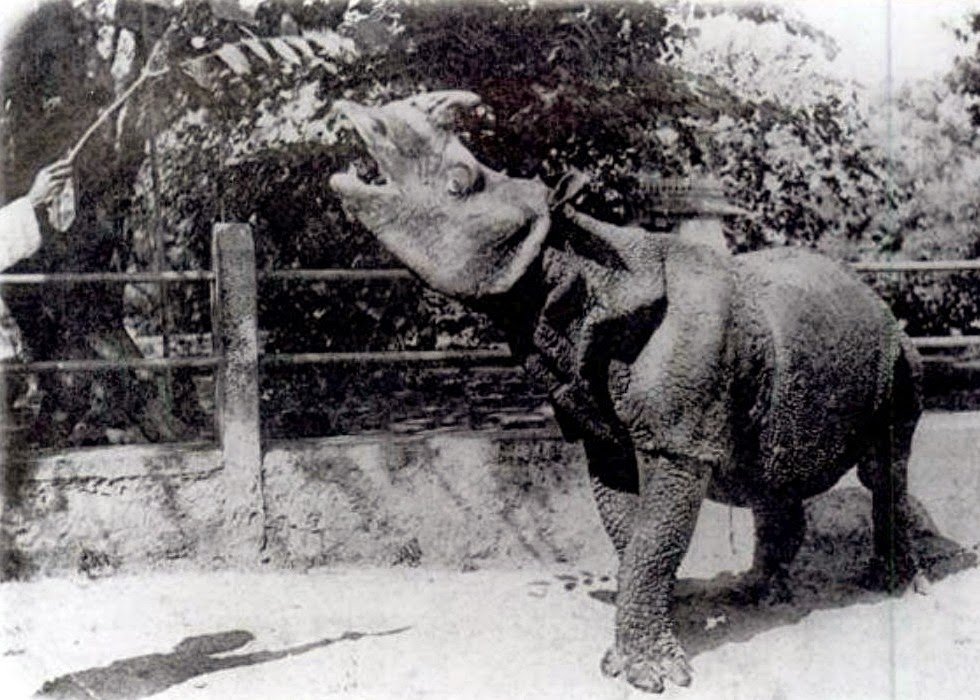 According to Joseph Belmont, another animal collector for zoos, a mysterious beast known as the scaled rhinoceros allegedly existed amidst the inhospitable, fever-ridden swamps of Java. Writing in Catching Wild Beasts Alive (1931), Delmont reported that this cryptic creature, supposedly distinct from the known species of Javan rhinoceros, had only been shot twice, with no living specimen ever having been obtained.

However, as already revealed in this present ShukerNature blog article, the ‘armour’ of known species of Javan rhino is noticeably scale-like, quite different from that of its closest relative the great Indian rhinoceros Rhinoceros unicornis. Consequently, it would once again seem that the creature in question is Rhinoceros sondaicus after all. 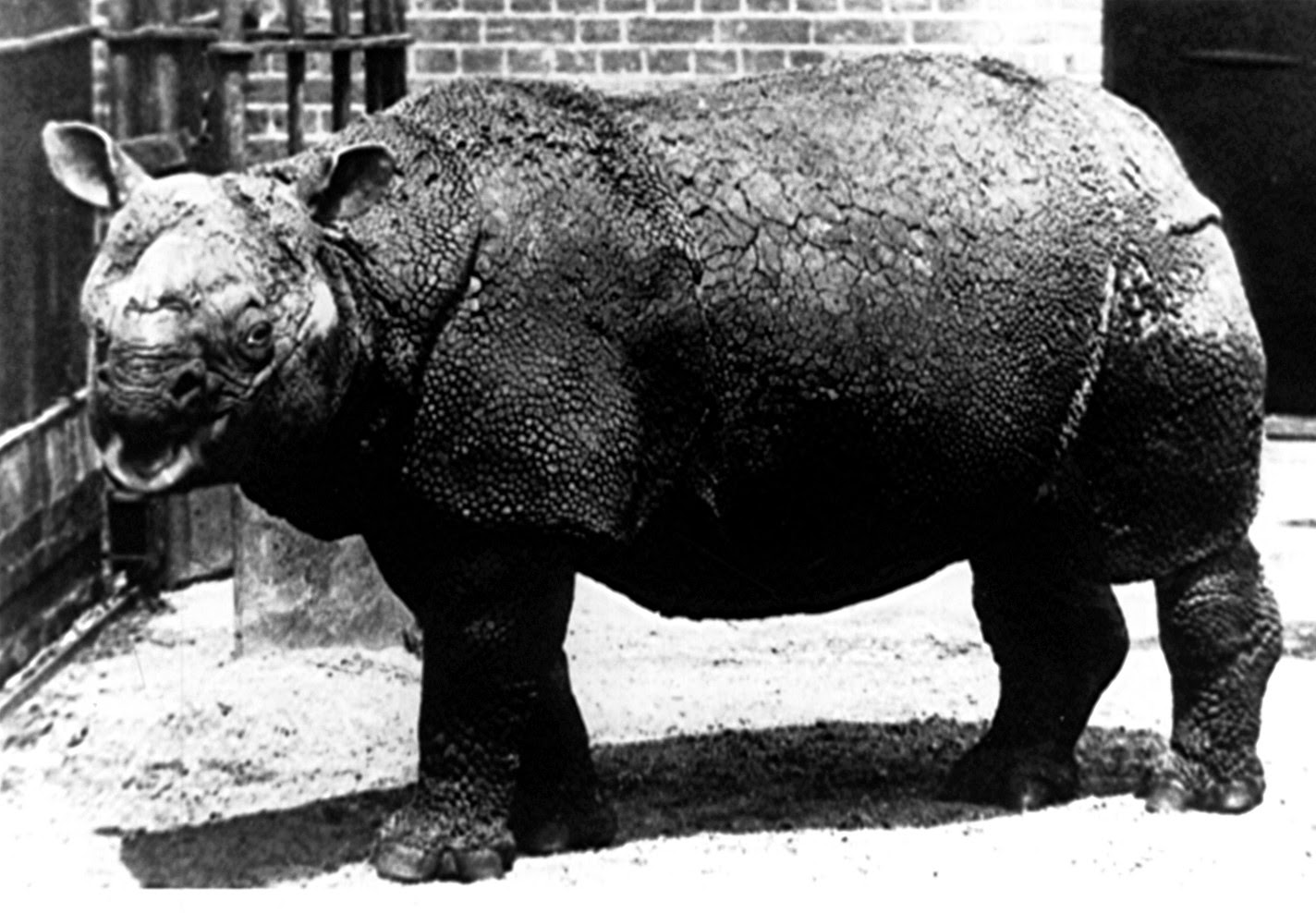 Photograph of the Javan rhinoceros exhibited at London Zoo in 1877, in which its scale-like armour can be readily perceived (public domain) 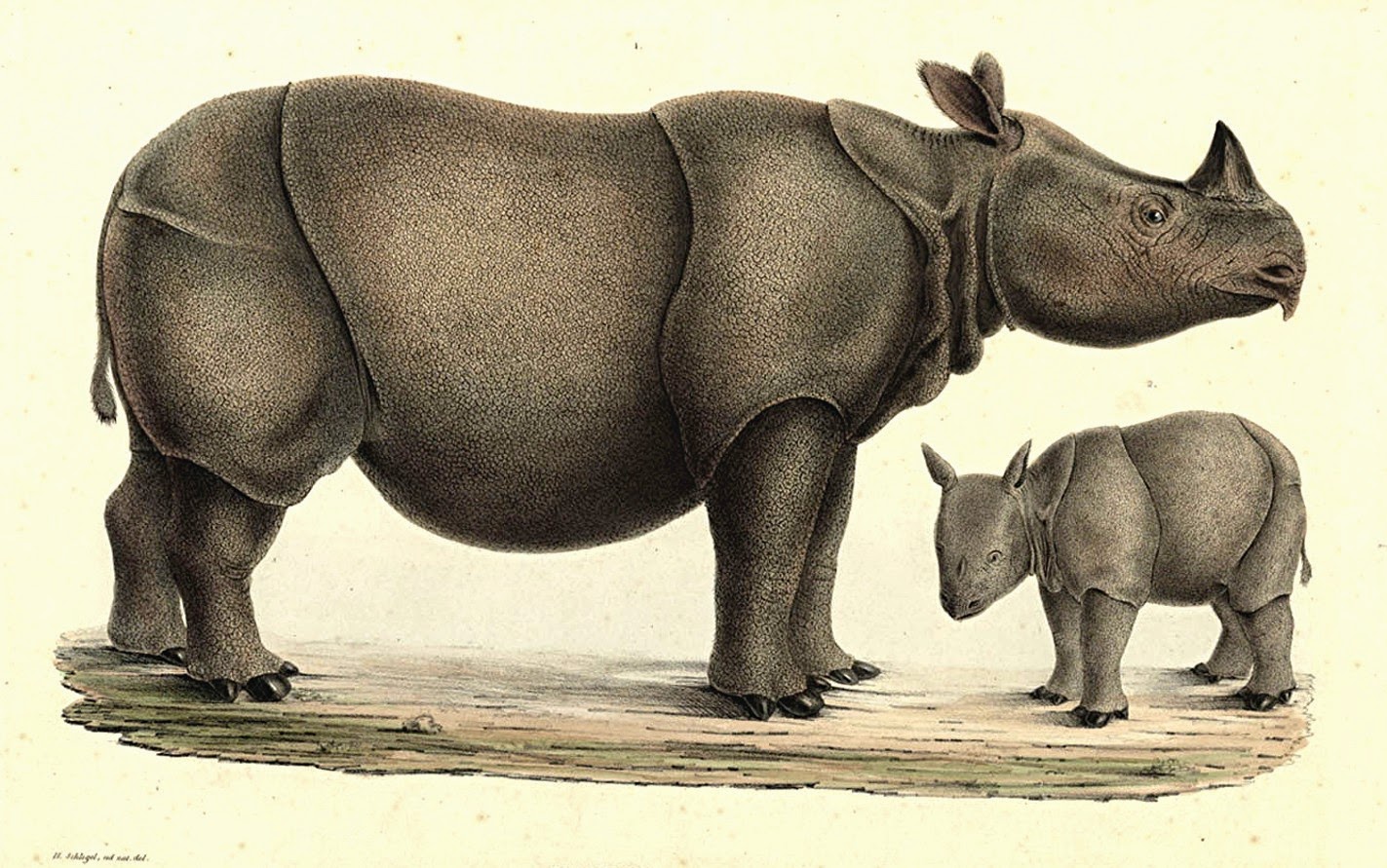 An adult Javan rhinoceros and calf, as depicted in a colour engraving from 1839 (public domain)