A GIANT HYRAX AND CHINA'S MYSTERY BEASTS OF BRONZE 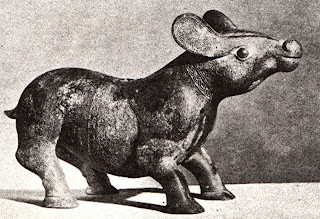 On 30 November 1935, a British magazine called The Field published an article by F. Martin Duncan entitled 'A Chinese Noah's Ark', which surveyed a selection of Chinese works of art from an exhibition that was being staged by London's Royal Academy. Duncan's article included photographs of several exhibits - one of which (its photo opening this present ShukerNature article) was a small bronze statuette of an exceedingly strange animal.

The statuette was owned at that time by H.J. Oppenheim, and as can be seen here, the creature that it portrays bears little resemblance to any modern-day species - which presumably explains why it was referred to in the exhibition as a mythical animal. Overlooked by cryptozoology, moreover, the bronze was soon forgotten beyond the perimeters of the art world. Today, it is housed in the collections of the British Museum, London, to whom it was bequeathed in 1947 by Oppenheim.

During the early 1980s, however, an article in the magazine Smithsonian concerning the Warring States period in China (480-222 BC) included a photograph of a near-identical bronze statuette. It was one of 151 items in an exhibition of Chinese art from the Warring States Period on display at the Smithsonian Institution's Freer Gallery of Art. This statuette and several others of the same type, representing the same animal, had been found in 1923 near the village of Li-yu, in northern China's Shanxi province.

This time, the animal was called a "fanciful tapir-like beast" (despite the fact that it looks nothing like a tapir - lacking the latter's characteristic nasal trunk, and possessing very much shorter yet proportionately sturdier limbs, disproportionately large ears, hooves that were circular rather than claw-like, and scaly skin), with the comment that it seemed to have no practical or ritual function. Not long afterwards, Brown University ungulate expert Dr Christine Janis serendipitously came upon the article - while browsing through some magazines in her doctor's waiting room! (And during the mid-1980s I sent her a copy of the photograph from The Field article.) Moreover, while visiting Sydney, Australia, she was able to purchase a life-sized replica of one of these bronze beast statuettes – quite possibly of the Freer specimen as it closely resembles this particular one, and the Freer Gallery has indeed made available for purchasing purposes official replicas of theirs, produced by New York's Alva Studios. 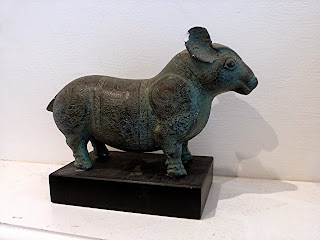 A photograph of the original Freer statuette can be accessed on this gallery's official website (click here). It is stated there to be from the Middle Eastern Zhou dynasty (existing during the Warring States Period), and, more specifically, to date from the early 5th Century BC. Its dimensions are given as: height, 11.2 cm; length, 18.3 cm; diameter, 6.3 cm. The following details are also included:

"This quadruped was crafted with considerable detail, especially in the modeling of the animal's face, its short, hoofed legs, and its scaled rotund body. Despite the clear features, the identity of the animal remains obscure, as does the precise function of the bronze figure. The collar of cowrie shells, twisted rope bands, striations, and scale patterns suggest that this animal was also produced in the Houma workshops in southern Shanxi Province."

Christine had no problem in classifying its mysterious 'tapir' - due not only to her specialised knowledge of ungulates, but also to the fact that she had actually kept smaller modern-day versions as pets. 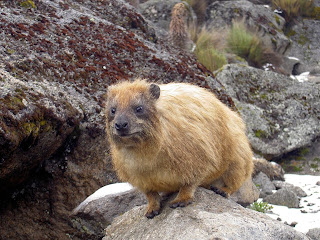 The beast of the bronzes was a hyrax - one of those superficially rabbit-like creatures also termed conies or dassies, but supplied with small hooves and an anatomy that unmasks them as diminutive relatives of the proboscideans (elephants, mammoths, and mastodonts). However, this particular example appeared to be far from diminutive.

Indeed, as she subsequently explained in a paper published in 1987 by the now-defunct International Society of Cryptozoology's scientific journal, Cryptozoology, Christine became convinced that it was meant to represent a certain giant form of hyrax from China's late Pliocene (and possibly early Pleistocene too). This pig-sized creature was Pliohyrax, currently known to have been represented by at least three different species. If Christine is correct, then Pliohyrax must have persisted into historic times. (Incidentally, there were some even bigger, earlier species of hyrax, belonging to the aptly-named genus Titanohyrax, that are estimated to have been as big as rhinoceroses!) 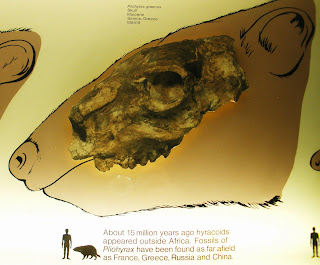 The head of the bronze beasts closely compares to those of modern-day species of hyrax - and so did that of Pliohyrax. In contrast, their body is hippopotamus-like - but although no post-cranial remains of Pliohyrax are presently known, Christine noted that the high position of the eye sockets in its skull (comparable to those of the hippo) indicates that it might have been semi-aquatic like the hippo. It may therefore have possessed a similar body shape too, as fossil ungulates with hippo-shaped bodies tend to have these elevated eyes.

Nevertheless, there was one notable problem when attempting to reconcile the bronze beasts with any type of hyrax - whereas the latter have several hooves on each foot, the feet of the bronze beasts have only one hoof apiece. Christine, however, has proposed that this discrepancy indicates that the animal was one known from mythology rather than one personally seen by the sculptor. Presumably, therefore, the giant hyrax had indeed survived long beyond the Pliocene, and had once been well-known to mankind in China, becoming incorporated into their mythology, but had died out prior to the Warring States Period.

There is also an equally plausible alternative to this possibility, as proffered once again by Christine. A hyrax the size of Pliohyrax would be much heavier than today's notably smaller species, and may therefore have evolved a more compact type of foot structure with a pad underlying the foot - resembling the feet of pigs and hippos. Perhaps this is what the sculptor was attempting to convey when producing the bronze statuettes - hence Pliohyrax may have lingered into the Warring States Period after all. As there is no evidence of its survival today, however, we must assume that it subsequently became extinct - or perhaps, like many other large, sluggish, inoffensive beasts with succulent flesh, it was exterminated by hunters. 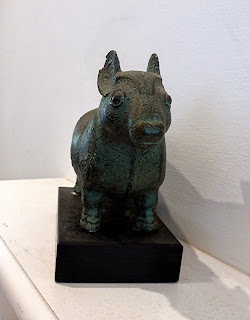 Finally: While researching this fascinating subject, I discovered a beautiful life-sized replica of the Freer Gallery's bronze beast statuette on the website of an auction house called Invaluable. Produced by Alva Studios, the statuette was sold on 28 September 2013 for US$ 100, but its listing remains on the auction house's site (click here). In addition to the description of the original statuette given in the Freer gallery, Invaluable's listing also includes the following details:

"Losses to the ears on this replica piece. Labeled 'Authentic Copyrighted Replica Made From the Original At the Freer Gallery of Art, Smithsonian Institution, By Alva Studios, Inc., New York'."

Its listing contains several photographs too, including this one: 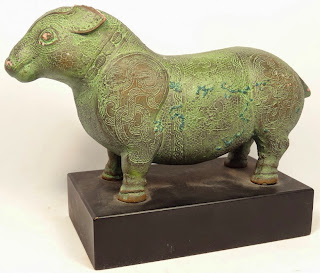 This ShukerNature blog article is a greatly-expanded, updated excerpt from my book In Search of Prehistoric Survivors. 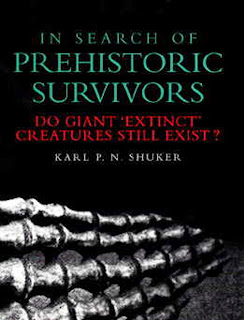