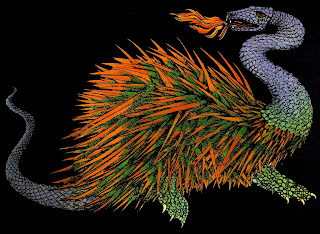 The peluda or shaggy beast (© Helena Zakrzewska-Rucinska/Dr Karl Shuker/Marshall Editions; this splendid illustration was specially commissioned for my book Dragons: A Natural History)

When I was researching the first of my two books on dragons, Dragons: A Natural History, published in 1995, a certain trio of French dragons attracted my particular interest. For each of these monsters not only featured in its own fascinating legend, but also was exceptionally unusual in morphology and behaviour. Yet, surprisingly, none of them had previously attracted much attention in dragon books. Consequently, I swiftly remedied that sad situation by devoting a detailed section to each one, in which I recounted its legend and illustrated it with reconstructions of their supposed appearance.

These three remarkable reptilians were the tarasque, the peluda, and the gargouille. I have already excerpted my above-cited book's tarasque account on ShukerNature (click here) and I will be doing the same at some stage in the future with the gargouille. Today, however, it is the turn of the peluda to take centre-stage, so here is my book's account of this very memorable monster:

There on the bank of the river Huisne, at La Fert‚-Bernard in medieval France, something was definitely moving. Suddenly, what appeared at first to be the head and sinuous body of a huge viper-like snake emerged from a spherical mass of bright green vegetation, and reared upwards above it. Moments later, however, the vegetation itself began to move, quivering as if it were a living creature - which was only to be expected, for that was precisely what it was. What had seemed to be nothing more than a cluster of riverside foliage was in reality the round body of a huge animal with shaggy green fur - and what had appeared to be a giant serpent was now exposed as this extraordinary animal's head and neck!

It was the peluda - a terrifying amphibious neo-dragon also known as the shaggy beast ('la velue'), which had been spawned in early biblical days and was refused entry onto Noah's Ark, yet had nonetheless survived the Great Flood, and was now terrorising the environs of La Fert‚-Bernard. Its dense green pelage partially hid four horny, turtle-like feet, and bristled with countless numbers of spine-like quills - which contained potent stinging venom, and could be jettisoned like poisonous javelins into anything unwary enough to approach too closely. This monstrous beast could also kill a person with a mighty thwack of its immensely powerful tail - and when it was sufficiently angered, a single blast of flame spewed forth from its coiled throat could incinerate fields for miles around.

For a time, the peluda had contented itself with raiding farms and stables each night in search of horses and other livestock as prey - robbing the farmers of their livelihood, but rarely of their lives, unless they were foolish enough to challenge its depredations.

Occasionally, massed attacks on the beast by brave companies drawn from the local populace had succeeded in driving it into the Huisne - but the peluda was of such colossal size that whenever it submerged itself underwater, the river immediately overflowed its banks, and much of the district bordering on either side was completely flooded, thereby causing as much devastation to the farmers as the monster's own onslaughts. 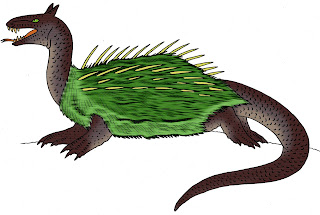 A second vivid artistic representation of the peluda (© Tim Morris)

More recently, however, the situation had become even worse, for the peluda had lately expanded its dietary scope - adding children and damsels to its murderous menu. Several of the village's fairest maidens had been devoured, and only this morning yet another had been ambushed and carried away - but this time she had not been alone. Her valiant fiancé had been nearby, and had witnessed the terrible deed. Now he swore vengeance against her antediluvian attacker, and he took up his trusty sword to do battle.

Protected from the peluda's deadly arsenal of self-propelling quills by his suit of mail, and additionally armed with knowledge gained from the village's wisest seer, the bold youth strode forth and aimed a terrible blow with his sword - but not at the monster's undulating neck, and not even at the heaving belly concealed beneath its shaggy fur. Instead, he hacked down at its writhing tail, and severed it in two with a single slash of his keen blade. Instantly, the mighty peluda keeled over and died - for its tail was the only portion of its body vulnerable to mortal injury.

Back in La Fert‚-Bernard there was great rejoicing, and the remains of the peluda were embalmed. As for its conqueror, he was acclaimed forever more as a hero, and rightly so - after all, he had achieved a feat that not even the Great Flood had been able to accomplish!

For plenty of other diverse dragons, be sure to check out both of my dragon books – Dragons: A Natural History, and Dragons in Zoology, Cryptozoology, and Culture. 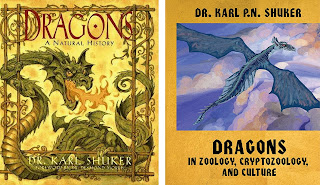