WHEN OGOPOGO WAS GOING FOR A SONG! 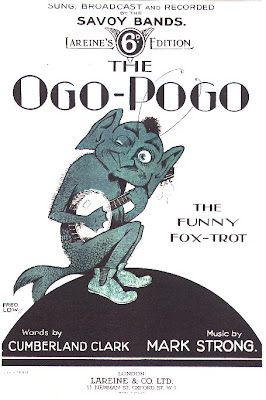 It's not every day that, totally by chance, you encounter a veritable legend, but that's exactly what happened to me one Sunday afternoon during the early 1990s while wandering around a book fair held in the community centre of Kinver, a small Staffordshire village. Looking up at one particular stall, I spotted something that was almost as fabled a cryptozoological artifact as the elusive thunderbird photo itself!

Attached to the side of one of this stall's bookshelves, sealed in cellophane, and on sale for the minuscule sum of just £2, was none other than the original sheet music, complete with fully-illustrated front cover, for 'The Ogo-Pogo - The Funny Fox-Trot' - which as every self-respecting cryptozoological enthusiast will confirm, is the very same English music-hall song from 1924 that gave its name to the now-famous water monster of Canada's Lake Okanagan.

Yet until I saw - and very swiftly purchased! - this cryptozoologically priceless item, it had never been depicted or even accurately quoted from in any crypto-book or article. For upon reading through it, I soon discovered that the lyrics describing Ogopogo's alleged parents ("his mother was an earwig, his father was a whale") were quite different from those various versions purporting to be from it that had been cited in previous works (some of which had replaced 'whale' with 'snail' or had replaced the entire line concerning putting salt on his tail with 'A little bit of head, and hardly any tail'). Here, therefore, are the full, original lyrics (by Cumberland Clark, written to music composed by Mark Strong), as given in this sheet music:

One fine day in Hindustan,
I met a funny little man.
With googly eyes and lantern jaws,
A new silk hat and some old plus fours.
When I said to that quaint old chap:-
"Why do you carry that big steel trap,
That butterfly net and that rusty gun?"
He replied "Listen here my son:-

On his Banjo night and day
The Ogo-pogo loves to play,
He charms the snakes and chimpanzees,
The big baboons and the bumble bees.
Lions and tigers begin to roar:-
"Play us that melody just once more".
Did I hear the sound of an old banjo?
Pardon me I shall have to go!

Moreover, the cover portrayed a boot-wearing, antenna-sporting, banjo-playing, pixie-like monster from Hindustan - all far removed indeed from Canada's serpentiform cryptid. Nevertheless, it was this very sheet music that had originated one of the most familiar of all modern-day cryptid nicknames (until then, the Lake Okanagan monster had been known only as the naitaka - a traditional native American name given to it by the local Okanakane tribe).

Thanks to veteran Ogopogo researcher Arlene Gaal, I subsequently obtained a copy of an early American recording of the song itself, performed by the Paul Whiteman Orchestra on an old shellac 78 rpm record. (Please note, however, that in this American version the second verse is missing, and various words and lines in the first verse have been changed from the original English lyrics given above, to yield a much more Stateside-sounding song, in which even 'the Lord Mayor's Show' has been replaced by 'a Broadway show'!)

And so now, after finally mastering the art of uploading music tracks to YouTube, I have pleasure in presenting for your delight on YouTube, the Paul Whiteman Orchestra's version of 'The Ogo-Pogo' foxtrot - check it out at: http://www.youtube.com/watch?v=uQE8T6Ip6Ic
Posted by Dr Karl Shuker at 00:13