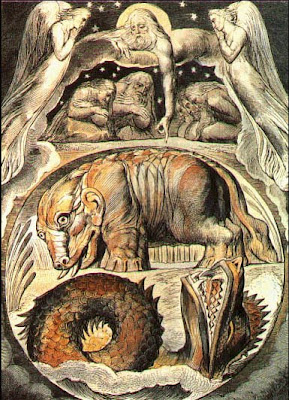 Over the years, there have been countless considerations of giant sea monsters, but what about the real, original leviathan? This colossal mystery beast of the Bible - "the piercing serpent...that crooked serpent...the dragon that is in the sea" (Isaiah, 27:1) - is, after all, the creature whose name has ultimately become an umbrella term for large, unidentified water beasts everywhere - as evinced by Tim Dinsdale's classic book on this subject, The Leviathans (1966, 1976).

The Old Testament contains four references to this monstrous sea creature, which provide several important morphological features - including its huge size, extensively scaled body, elongate shape, large plentiful teeth, shining eyes, powerful neck, smoking nostrils, and distinctive fins. Biblical scholars have nominated several different animals as the leviathan's identity, but whereas each possesses some of its characteristics, none has all of them.

The most popular identity is the Nile crocodile Crocodylus niloticus, which is indeed scaly and somewhat elongate, with an abundance of large teeth, a powerful neck, shining eyes, and a sizeable (albeit not enormous) body. However, it possesses neither fins nor smoking nostrils, and is not marine in habitat. Sharks are marine and finned, some are very large and fairly elongate, and many have plenty of large teeth, but not smoking nostrils, shining eyes, or scales.

Whales are also marine, finned, often very large and quite streamlined, and some have many large teeth. Moreover, the spray spouted upwards from around their blow-holes when they exhale could conceivably be distorted into smoke during the telling and retelling of leviathan reports over successive generations - but whales are neither scaly nor shiny-eyed, and their necks are almost invisible.

And so it goes on - even identities as unlikely as the rock python Python sebae have been offered in a desperate attempt to reconcile this exceptional creature with a known type of animal.

Most probably, the leviathan is a non-existent composite, part-myth and part-reality. The latter component comprises a hotchpotch of distinctive features drawn from all of the animals noted above, and possibly one other too - a bona fide sea serpent.

On account of its scaly skin, veteran cryptozoologist Dr Bernard Heuvelmans considered the leviathan to be of the 'marine centipede' type. (Thus, according to his belief in what those creatures are, it would have been a modern-day armoured archaeocete - however, we nowadays know that such beasts never existed, as they were merely artefacts caused by archaeocete fossils being fiound in association with scales from other, unrelated creatures.) Conversely, I believe that if the leviathan is either a sea serpent or a myth inspired in part by sightings of one, then it is more likely to be a living mosasaur. 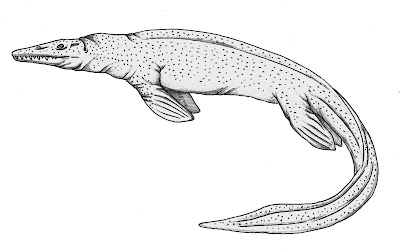 Mosasaur - could a modern-day species explain the leviathan? (Tim Morris)

Indeed, this identity uniquely combines all of the leviathan's features - its scaly body, elongate shape, shining eyes (typical of many large reptiles), powerful neck, fins, great size (as with the tylosaurs), large plentiful teeth, and smoking nostrils (as with the whale identity, no doubt a reference to the spouting of water displaced from around its nostrils when exhaling underwater). Yet only a complete specimen can conclusively test this hypothesis.

"Canst thou draw out leviathan with an hook?", asks Job (41:1). Judging from science's singular lack of success in securing the carcase of any type of genuine water monster via any of the traditional means utilised in capturing aquatic animals, the answer to this question would appear, quite definitely, to be no! Clearly, then, it is time to develop a different means of obtaining such evidence - one commensurate with the sophisticated technology now available for scientific research - for until such evidence is obtained, all of the leviathans documented by water monster chroniclers down through the ages will continue to remain an abiding mystery.

In 1886, Charles Gould passed the following remarks in his book Mythical Monsters:

"Let the relations of the sea-serpent be what they may; let it be serpent, saurian, or fish, or some form intermediate to them; and even granting that those relations may never be determined, or only at some very distant date; yet, nevertheless, the creature must now be removed from the regions of myth, and credited with having a real existence, and that its name includes not one only, but probably several very distinct gigantic species, allied more or less closely, and constructed to dwell in the depths of the ocean, and which only occasionally exhibit themselves to a fortune-favoured wonder-gazing crew."

It is a sad reflection of zoology's longstanding disinterest in the subject of water monsters that those words are as relevant today as they were more than a century ago. 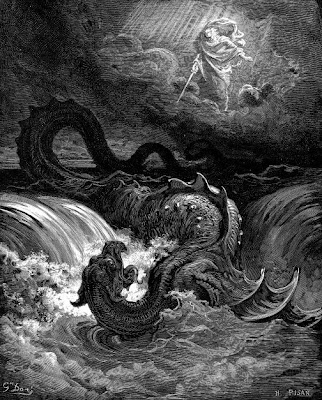 This is an excerpt from one of my books-in-progress, The Creatures That Time Forgot: Still In Search Of Prehistoric Survivors