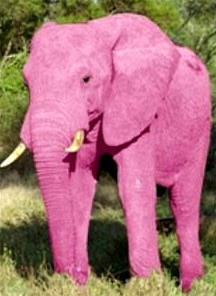 The pink elephants that featured in a truly surrealistic, psychedelic scene accompanying a certain very famous song from the classic Disney animated film ‘Dumbo’ that shared this particular ShukerNature post’s title were hilarious hallucinations arising from accidental over-quaffing of champagne by the little elephant with the big ears. However, as revealed here, pink elephants have also been reported in reality, although we tend to refer to them more commonly, if less accurately, as white elephants. Let me explain.

The veneration of white elephants - known as Sinpyudaw in Myanmar, and as Chang Peuak in Thailand - by many Asian cultures is well known. In reality, however, the term 'white elephant' is something of a misnomer, because the animals in question are not generally pure white. Instead, the features that traditionally characterise a so-called 'white elephant' are:

1) A very pale pink/red skin, with even paler patches on the belly and inner limbs.

2) White hairs on its body and tail.

5) White toe nails (sometimes 20, instead of the normal complement of 18, is also needed).

In short, a better description of a white elephant would be a polydactylous pink elephant - although it is somewhat unlikely that these animals would be looked upon so deferentially (at least by westerners) if such a term were indeed employed! (Indeed, elephants that are genuinely white-skinned are usually suffering from an acute skin disease, as with the example documented during February 1945 by Denis Lyell in The Field.)

In the Journal of the Bombay Natural History Society for 1956, Tun Yin and the journal's editors collectively listed a number of white elephants recorded during the first half of the 20th Century. In its opening years, one white elephant calf was captured in the Kataha Forest Division of Burma (now Myanmar), and was presented to the Trustees of the Shwe Dagon Pagoda, but due to over-feeding by pilgrims it died soon after its arrival in Rangoon (now Yangon). Another specimen, captured in the Toungoo Forest Division and exhibited by its owner in Europe and America, died in Calcutta during its journey back home.

A female calf born on 6 March 1918 to one of the elephants owned by the Bombay Burma Trading Corporation possessed a remarkably pale skin and pearl-coloured eyes, but was pronounced by a jury of prominent Burmese personages not to be a genuine Sinpyudaw, because it only had 18 toes and an unsatisfactory tail! In fact, it is just as well that they did dismiss its claim, because as it grew older its skin darkened very considerably, so it was likely to attain normal colouration by adulthood.

A few years later, conversely, another white elephant, this time born in northern Siam (now Thailand), was deemed satisfactory by local experts. Demonstrating the importance of white elephants in Thailand, there is even a Royal White Elephant Department in Bangkok, from which a deputy was dispatched to determine whether this latest specimen was indeed a true Chang Peuak. After careful scrutiny, he decided that it was.

Three white elephants were discovered in Thailand during 1977, and were presented to King Bhumibol Adulyade. And in March 1983, an even more dramatic event took place - the discovery of a whole community of white elephants in Indonesia. Not only was it very surprising to find a community of such creatures, but also it was an equally important discovery zoogeographically, because this was the very first record relating to any white elephants in Indonesia. Plans were soon made to transfer this priceless herd to a wildlife sanctuary in order to ensure its protection - but by the time that the relocation efforts had been put into action, the elephants had moved on, and were not found again. 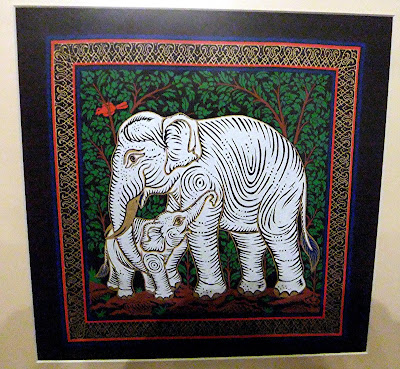 White elephants, depicted in a batik painting (Dr Karl Shuker)
Outside Asia, perhaps the most famous of all white elephants was a male called Hanno, who was given by King Manuel 1 of Spain to Pope Leo X (of the de Medici dynasty) upon his coronation in 1514. He soon became a great favourite of the pope but, tragically, Hanno died just two years later, on 8 June 1516, from complications caused by a gold-enriched laxative administered to him in order to treat his constipation.

Even today, white elephants are still being recorded and revered. I have many modern-day reports on file, the most recent one dating from 29 June 2010, describing the capture three days earlier of one such individual, an adult cow aged about 38, in a western region of Myanmar hit by severe floods. This was the third white elephant captured in Myanmar since 2001 – the previous two were captured in the same western region in 2001 and 2002 respectively.

Myanmar's state media announced that this latest white elephant would protect the country and would be taken to its new capital, Naypyitaw, where it would reside thereafter in luxury - a fitting fate for any priceless pachyderm, white or pink notwithstanding! 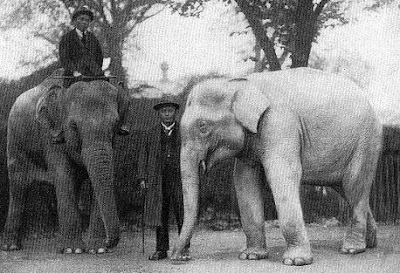 The above account is an excerpt from one of my forthcoming books, The Anomalarium of Doctor Shuker.