A cryptozoological animal is usually defined as one whose existence is known to the local people sharing its habitat but which is not recognised by science. All of the major new terrestrial species scientifically described and named since 1900 fitted this definition prior to their official discovery and recognition – the okapi, mountain gorilla, giant forest hog, Komodo dragon, kouprey, Congo peacock, Chacoan peccary, Vu Quang ox, and giant muntjac, to name but a few. 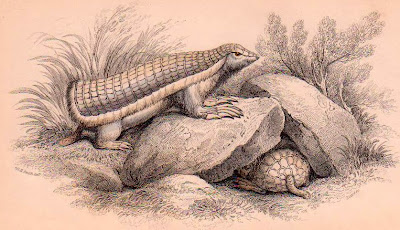 Notwithstanding this, there is at least one very distinctive mammal whose existence had genuinely remained hidden from its human neighbours until its formal scientific discovery – and that is the pichiciego (aka pichiciago) or pink fairy armadillo. No bigger than a mole, this extraordinary little creature is the world’s smallest species of armadillo, and is native to the dry grasslands and sandy plains of central-western Argentina, where for much of the time it remains underground, using its huge front claws to agitate the sand so that it can then quite literally swim through it, as easily as if it were swimming through water.

So rarely is this cryptic animal seen above-ground, however, that the local people were astonished when in 1824 zoologist Prof. Richard Harlan from the University of Philadelphia unearthed a pichiciego at Mendoza. Nothing like it had ever been seen before, either by them or by zoologists, and when he officially described its species in 1825, Harlan christened it Chlamyphorus truncatus – sole member of an entirely new genus. 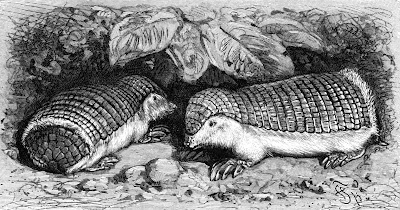 Unlike the much thicker, tougher, and more comprehensive body armour of other armadillo species, the plates of the pichiciego are notably thinner, and only loosely attached to its skin by a thin membrane running along the vertebral column. In addition, none but its pelvic armour is hardened, and breast armour is completely lacking. However, its head armour extends beyond the horny nasal plate (probably to compensate for the fragility of the creature’s skull), and its broad-ended tail also has a covering of armour. As one might expect from a predominantly subterranean, fossorial species, the pichiciego’s eyes are extremely small, and its external ears are nothing more than tiny folds of skin.

Even today, this most minuscule of armadillos is so elusive and seldom seen that television naturalist Nick Baker’s recent search for it in Mendoza, as featured in an entertaining episode of his ‘Weird Creatures’ series from 2008, ended in dismal and seemingly inevitable failure. Despite setting 20 pitfall traps and persuading the local fire brigade to drench the search area’s sand dunes with water in the hope of stimulating some pichiciegos to surface (after learning from the locals that these rarely-spied creatures appear more frequently after rainfall), a dejected Nick ultimately conceded defeat, having to be satisfied instead with viewing a preserved specimen in the home of a villager. Indeed, on the few occasions when a pichiciego is encountered, it is usually captured alive and maintained in the living state for as long as possible by its fascinated captors before it is finally preserved in mummified form as a highly-prized curio.

But perhaps Nick and others have simply looked for pichiciegos in the wrong way or even in the wrong place. During his own search for this evanescent mini-mammal in Mendoza’s pampas region, 20th-Century German zoologist Wolf Herre journeyed to an isolated railroad station in the middle of a broad, flat expanse of pampas that was said to be the pichiciego’s centre of distribution – even the area’s shrubbery was named ‘pichiciego’ after it. And here he eventually did achieve success, albeit in a most surprising way:

"For hours we wandered under the bright sun, trying in vain to find tracks of the pichiciego. But in the vicinity, wooden railway ties were being replaced, and the pichiciego was found in the rotting wood, probably attracted by the insect larvae inside."

Altogether a very remarkable creature – so remarkable, in fact, that in the years following the pichiciego’s discovery by Harlan, no one expected to find anything else even remotely similar. In 1859, however, while crossing the Andes via a route not previously utilised by Western travellers, German zoologist Prof. Karl Hermann Burmeister discovered in the possession of a native Indian villager the mummified remains of a hitherto unknown species of armadillo that superficially resembled a larger version of the pichiciego, and thus became known as the greater pichiciego.

This intriguing species’ generic name has changed several times since it was scientifically described by Burmeister in 1863, and some zoologists no longer consider it to be closely related to the pichiciego. However, it is still commonly referred to as the greater pichiciego, and is known scientifically as Calyptophractus retusus, the only member of its genus. Even today, it remains scarcely-known, and much of the little information that has been documented about this mysterious mammal, which is native to Argentina, Paraguay, and Bolivia, was gained from observations made of a living specimen captured in Mendoza during July 1965, which was subsequently sent to Chicago’s Brookfield Zoo, where it lived until its death in December 1971. 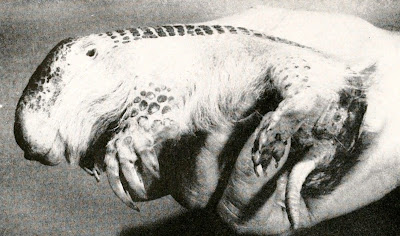 
NB - All other illustrations here are 19th-Century engravings of the pichiciego.