FOR WHOM THE BELL TROLLS! 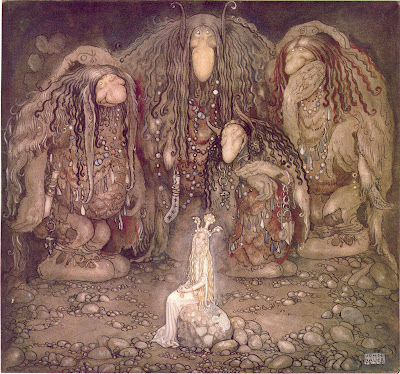 
Trolls are famously frightened of sunlight and the tolling of church bells, but did you know that they are also scared of thunder and sometimes transform into ball lightning? No? Well you do now, and so do I – thanks to an extremely interesting email that was kindly sent to me just a few days ago by a ShukerNature reader.

One of the delights of writing this blog has always been the receipt of additional and often very unexpected, significant information from its many readers and followers, some of whom post their thoughts and data directly here, whereas others send theirs to me privately. In this vein, after emailing me previously with valuable new data in response to my post on the night-raven (and which I duly included in full within the comments section of that post), on 8 January 2011 Swedish correspondent Håkan Lindh sent me another very informative and enlightening email, but this time on the subject of Scandinavia’s most famous folkloric entities - trolls.

If, like me, you were a child somewhere in Europe or North America during the mid-1960s, then it is very likely that your first encounter with the term ‘troll’ came via those ubiquitous toy figures originally created in 1959 by Danish fisherman and woodcutter Thomas Dam but which soon became toy sensations worldwide. Of varying size and often unclothed, but invariably topped with great shocks of silky hair, ‘troll dolls’ were created in their millions and in every conceivable combination of skin and hair colour (click here for more details). Fascinated by these weird yet strangely intriguing entities (clearly my future passion for cryptozoology was already beginning to surface!), I pestered my parents into buying me a sizeable, multicoloured array of them – and, hoarder that I am, I still have some of the smaller ones standing in line along the shelf of one of my bedroom bookcases, as well as a larger, fiery-haired biker troll! (Yes, my motorbike passion was an early developer too!) 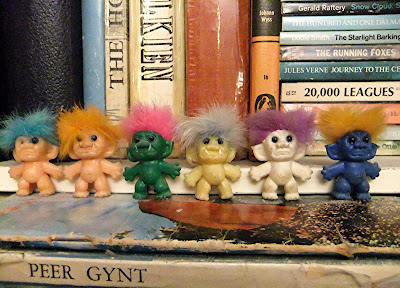 
From these Westernised toy trolls, it was just the smallest of steps for me to begin reading in British and American books of fables and folklore about more traditional, Nordic trolls – or what I had at least assumed until now were traditional Nordic trolls. Here I came across all of the classic troll stereotypes – slow-witted, hideously ugly, huge, hairy, and unclothed, living underground during the day and only emerging at night, liable to eat unwary humans if any strayed into their dark, forested domains, sometimes encountered lurking beneath bridges, and fated to turn to stone if caught above-ground by the first rays of the morning sun.

And then, in later years, along came cryptozoology, which introduced to me the exciting notion that perhaps trolls were more than just a myth. Could they instead have been inspired by misty, preserved memories from long ago of encounters between modern man’s ancestors and Neanderthal man? And could some of these latter have even survived into historical times, explaining reports of woodwose or hairy wild men allegedly spied in various of the more remote reaches of Europe? Moreover, there were even suggestions that perhaps trolls were man-beasts, comparable to the Himalayan yetis and North American bigfoot.

But how close – if indeed close at all – were any of these varied Western concepts of trolls to those prevalent in their Scandinavian homelands and traditions? Let’s just say, as you’ll now discover, that Håkan Lindh’s email to me regarding trolls was nothing if not eye-opening - revealing that the ‘real’ Nordic troll is very different indeed from what I had previously been led to believe or expect. It also contained a most interesting snippet concerning the possibility favoured by some cryptozoologists that dragons were real animals:

"I have been interested in cryptozoology for as long as I can remember, but I’m also very sceptical of the value of folklore as a source. Sure, stories may sometimes hide grains of truth, but folklore itself spins that according to its own "rules".

"The early folklorist/ethnographer Hyltén-Cavallius did a serious cryptozoological survey in the nineteenth century Sweden about dragons. His theory was that dragons really were a Scandinavian species of python, so he sent out advertisements to get in touch with witnesses. And people did contact him, but it is obvious that what they told him was of no real substance, exaggerated stories of grass-snakes and the staples from dragon-folklore mostly, so it ended in nothing. Hyltén-Cavallius sure was a pioneer, but also seen as something of an eccentric already in his own time. His theories about trolls and giants were also seen as too much.

"Besides a general knowledge of a phenomenon, I’m unsure if there are much facts to find from folklore.

"I read a few years back on the net about cryptozoologists trying to identify our trolls as some kind of bigfoot, and that is very strange indeed. Trolls are never described as giant apelike animals, they are people living in societies, wearing clothes, having laws and language etc just like humans. They are not even very monstrous to look at, troll-girls especially could even be exceptionally beautiful. However, they were magical, and "contrary" to humans. They lived under cliffs and mountains, they shunned steel, they feared thunder, were not Christian, and were cunning thieves. As shapeshifters they were most often seen as shadows, animals or "balls of string" (ball-lightning perhaps), and of course often they were invisible.

"After the industrialism arrived, illustrators of children’s books like John Bauer created the "modern" troll, but those were not the trolls people actually believed existed once.

"So there is nothing in the real folklore that connects trolls with bigfoot-type cryptids. No more than British fairies actually.

"But cryptozoology will continue to be a favourite interest of mine, just as folklore is, even if I’m sceptical about [whether] the two subjects will really meet very often."

Troll societies bound by laws and gifted with language, the wearing of clothes, exceptionally beautiful troll maidens, and the ability to change into spheres of string or lightning? It all sounds less like the grunge-associated trolls of yore that we all thought we knew, and more like the synopsis for a new slick fantasy movie franchise.

That gives me an idea! Hold on – what do you mean there’s already a series of films out there starring a giant green ogre who actually turns out to be quite a caring, sharing, loveable kind of guy?! You’ll be telling me next that there’s also a series of films out there starring modern-day vampires more concerned about romantic teenage angst than blood, and sporting a fetchingly wan pallor to match! What? Oh... 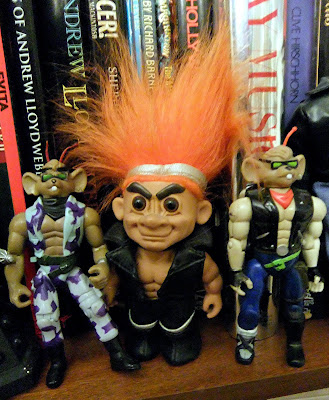 My biker troll doll (flanked by a pair of Biker Mice From Mars!) (Dr Karl Shuker)