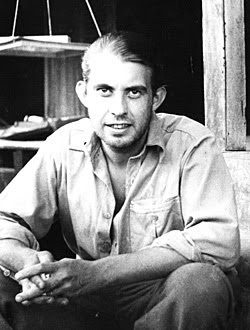 What does a South American sasquatch of sorts and the world's longest species of toad have in common? Perhaps I ought to rephrase that question, and ask who, rather than what, because the answer is the late Rolf Blomberg (1912-1996) - a Swedish explorer, photographer, and writer. As fully documented in my books The Lost Ark (1993), The New Zoo (2002), and the near-completed third edition of these books of mine on new and rediscovered animals, in 1950 Blomberg was instrumental in bringing to scientific attention a hitherto-undescribed species of giant toad native to southwestern Colombia. He achieved this by capturing a huge specimen there that he brought back with him to his home in neighbouring Ecuador, and which became the type specimen of this spectacular new species - duly dubbed Bufo blombergi in his honour a year later. Blomberg's giant toad can attain a total snout-to-vent length of up to 10 in (25 cm), which is greater even than that of the heavier, more massively-built cane toad B. marinus, the world's largest toad species.

(Incidentally, yesterday German cryptozoological correspondent Markus Bühler informed me that while browsing through a series of yearbooks from the 1970s for Stuttgart's Wilhelma Zoo, he noticed that the 1971 volume mentioned the chance birth at the zoo some years earlier of hybrids between a female B. blombergi and a male B. marinus. They were apparently indistinguishable from the paternal species, but exhibited unusually strong growth - no doubt a result of hybrid vigour. Bearing in mind that they were crossbreeds of the world's longest toad species and the world's largest toad species, it is a great pity that the book did not contain any additional information concerning them, because they must surely have had the potential to become veritable mega-toads!)

Less well known than his success with the giant toad, however, is that while exploring South America, Blomberg also investigated and documented reports of a mysterious man-beast known as the sacharuna. This entity is greatly feared by native tribes in Ecuador, who claim that it will kidnap humans, thereby calling to mind various comparable claims for North America's sasquatch or bigfoot. I am exceedingly grateful to Swedish correspondent Håkan Lindh for kindly bringing this hitherto-unpublicised cryptozoological aspect of Blomberg's researches to my attention, which he did in a detailed email to me of 15 January 2011, from which the following excerpts are quoted:

"He [Blomberg] had a colleague, a Danish man called Harry Nielsen, who himself had searched actively for the creature. And he even heard the alleged wailings at night from the beast, but while exploring he found that the source was a puma. Blomberg had, however, heard about two cases that made him take Sacharuna a bit more seriously than most. One case was a young girl that disappeared from her home but was found alive in the jungle some time later. She claimed that she had been kidnapped by an apelike creature, as big as a man, who gave her food but showed with grunts and gestures that if she tried to escape, he would kill her. She was interrogated several times by her parents and not once she did contradict herself.

"The other case was about a friend of Blomberg's, Emilio Bonifaz, who visited the area where Harry Nielsen had already searched for Sacharuna. He too heard odd noises from the jungle and was informed that that was the sound from the apemen. The locals claimed that at least three Sacharuna lived in the area, and that a few years earlier one was killed. The hunters showed Bonifaz where they buried the body, and Bonifaz excavated the spot. He did find bones, but so fragmented that it was impossible to draw any conclusions.

"Blomberg himself didn't believe Sacharuna was an unknown primate, or primitive human. He did, however, point out that many Indian tribes feared children with retardations, and...the Jivaros killed such babies on the spot as soon as they were born. Blomberg thought that Sacharuna may be such individuals with mental handicaps who had been cast out but had managed to survive in the jungle. Although Blomberg did not seem to think that explanation was completely convincing either, he favoured it over the purely cryptozoological theory. (I personally think that theory is very unsatisfying.)

"He also searched around for giant anacondas, but concluded that such stories were likely exaggerations."

Reports of man-beasts or wildmen have been discounted as sightings of mentally deficient outcasts or feral recluses/hermits on many occasions down through the ages, especially in relation to European woodwose, so this theory is hardly a new one. Moreover, like Håkan, I am not convinced by it at all, certainly not in a locality like the Ecuadorean jungle - where it seems highly unlikely that such individuals would survive the multifarious dangers posed there by such major threats as jaguars, venomous snakes and spiders, all manner of poisonous plants, virulent diseases, and even by other tribes. In contrast, there is a rich heritage of man-beast reports and sightings throughout the South American continent's dense tropical rainforests, so if this is the identity of the sacharuna, it would merely be another such example rather than a cryptozoological novelty.

It now seems pretty well established that the infamous Loys's 'ape' Ameranthropoides loysi, as pictured propped upright with a stick underneath its chin in the famous 1920s photograph snapped during a Venezuelan expedition led by Swiss geologist Dr Francois de Loys, was a hoax - merely a dead spider monkey with its tail chopped off or hidden from view. Nevertheless, many other reports of similar bipedal ape-like beings untainted by this incident are also on file, and palaeontological discoveries here include the fossils of various huge species of spider monkey far bigger than any known to survive today. In my view, if a South American counterpart to the large anthropoid apes of the Old World has indeed evolved convergently, and is still awaiting formal discovery by science amid this continent's remote verdant wildernesses, it may well have done so from the spider monkey lineage.
Posted by Dr Karl Shuker at 17:41