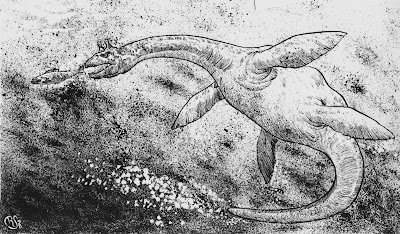 As you know, my poetry has its own separate blog – Star Steeds and Other Dreams (named after and devoted exclusively to Star Steeds and Other Dreams, CFZ Press: Bideford, 2009, my first published volume of poetry). This is because most of my poems do not deal directly (if at all) with cryptozoological subjects, but a few do. So here, for mystery beast lovers everywhere, making its debut on ShukerNature after a previous outing on Star Steeds, is one such example, which also happens to be a little snippet of crypto-history – the very first piece of writing that I ever penned (over 30 years ago!) in relation to the most famous mystery beast of all. Nessie, this one’s for you!

Through swirling mists of early morn,
Across the loch’s dull light,
A dark shape moves with hidden power,
Then disappears from sight
Beneath Loch Ness’s mirky cloak
Of water black and cold.
What lives in this vast underworld,
In Ness’s misty fold?

What creature thrives below the waves,
Beneath the surface grim?
What beast appears in photographs –
Obscure, opaque, and dim?
What creature gave the myths and tales
From bygone days new fame?
Of water horses, fierce, malign,
Which from the waters came,
To strike the hearts of every man
With terror of their forms.
The kelpies – dark, malignant ghosts,
And harbingers of storms.

So what gave all these legends life –
A creature huge in size,
With tiny horns and rhomboid limbs,
And glowing, deathless eyes?
A relic from the ancient past,
Disturbed by modern worlds?
It will be long, indeed, before
This secret is unfurled.
Posted by Dr Karl Shuker at 18:40