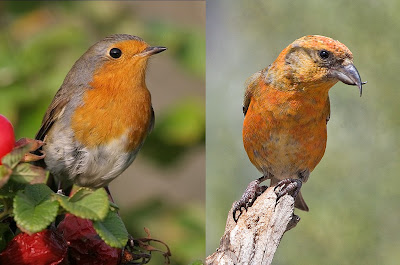 There are many traditional, quite often poignant religious folktales featuring animals, some of which are well known, others less so. In the following poem, which appears in my published poetry collection Star Steeds and Other Dreams (CFZ Press, 2009), I have combined two of these age-old stories, both of which are Easter-themed - the famous legend of how the robin gained its red breast, and the less familiar legend of how the crossbill acquired its twisted beak.

THE ROBIN AND THE CROSSBILL

A tall wooden Cross cast its pitiless shadow
Across a green hill ‘neath the grey, leaden sky.
For mankind had crucified Jesus, its Saviour,
And left Him there helpless to suffer and die.

But two tiny birds came to visit Lord Jesus,
Two small humble creatures with hearts full of love.
The little brown robin and bright crimson crossbill,
Each blessed by the Light of their Father Above.

When Jesus looked down and beheld the small robin,
He smiled at him softly, and down from His breast
His blood trickled slowly like deep scarlet teardrops,
And falling below stained the robin’s white chest.

The crossbill in vain used his bill to remove the
Cruel nails that impaled Jesus’ hands and His feet,
But prised with such force that his bill crossed and twisted
‘Ere, strength being spent, he conceded defeat.

And e’er since that day when they visited Jesus,
The bill of each crossbill is twisted and curled,
While Jesus’ red blood on each robin’s chest lingers,
Reminding us just how much God loves our world.
Posted by Dr Karl Shuker at 10:23