A MEMORIAL TO THE PASSENGER PIGEON 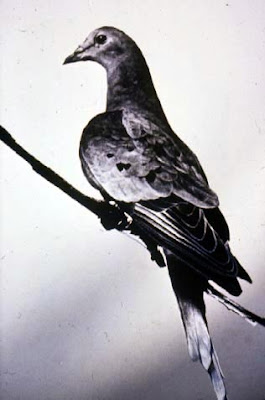 Martha Washington, the last passenger pigeon, photographed shortly before her death in 1914, which marked the extinction of what had once been the world's most abundant species of wild bird

When Martha Washington, a small grey dove-like bird, died in a cage at Cincinnati Zoo on 1 September 1914, her passing marked one of the most shameful episodes in the history of humankind – the extinction of the passenger pigeon Ectopistes migratorius, which, incredibly, had been just a century earlier the most abundant species of wild bird in the world, whose vast numbers as witnessed in enormous flocks migrating each year through the North American skies could be counted in the billions, until they were decimated by hunters. This poem, which appears in my poetry book Star Steeds and Other Dreams (CFZ Press, 2009), is a tribute to that lost bird, and a stark reminder of the inconceivable wickedness responsible for its extermination. The final verse’s last word, ‘fly’, deliberately breaks the tradition set throughout the poem of ‘sky’ being the last word in each verse, in order to underline a change of direction in the poem, from realism to mysticism.
A MEMORIAL TO THE PASSENGER PIGEON
Each year, across the New World sky,
Would flocks of birds in millions fly –
Unending flights eclipsing light
While travelling through the sky.

Known as passenger pigeons, they –
The birds that hid the sun’s bright ray
For days and nights while endless flights
Migrated through the sky.

But hunters saw this awesome sight
As food for sport in wild delight,
And shot to kill as ever still
More birds passed through the sky.

Huge raucous clouds of birds in flight,
All unsuspecting of their plight,
Were seen and shot, then left to rot,
As more soared through the sky.

The heavens filled with countless birds,
And through the lands their cries were heard,
As they flew past, upon their last
Migration through the sky.

The pigeons’ flocks were soon reduced
When men with savage guns were loosed –
Who aimed and fired, and ne’er grew tired
Of shooting at the sky.

Dead birds grew greater every day,
But mankind’s greed was swift to pay,
For soon, as feared, they disappeared –
No birds flew through the sky.

Then parties searched for any few
Survivors of those flocks that flew
Across the lands in mighty bands,
A-flying through the sky.

But none did any human find,
The victims of his brutal mind.
Extinct at last – the days were past
When flocks whirred through the sky.

At Cincinnati Zoo one day,
Poor lonely Martha passed away.
The last was dead, her soul was led
Across that boundless sky.

And only then did mankind weep,
A bitter harvest would he reap
For many years, as futile tears
Fell flooding from the sky.

But though their mortal days are done,
The pigeons’ spirits linger on.
For up in Space, beyond man’s face,
On silent wings they fly.
Posted by Dr Karl Shuker at 10:54