GOING WILD OVER THE WILD AMERICAN HOUND – YOUR ASSISTANCE IS REQUESTED! 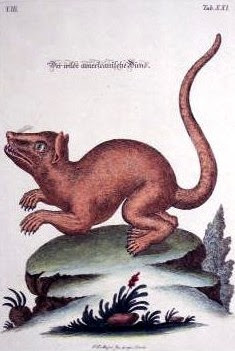 Here’s an odd little conundrum for you to cogitate upon at your leisure, should you be so inclined. During an online surfing session a few days ago, I happened upon the curious illustration presented above.

Details concerning it are sparse in the extreme, but here is what I have been able to uncover so far. Measuring 12 inches by 8 inches, the image has a German title that translates as ‘wild American hound’, and is a hand-coloured copperplate engraving by Johann Daniel Meyer that appeared in his Angenehmer und nützlicher Zeit-Vertreib mit Betrachtung curioser Vorstellungen allerhand kriechender, fliegender und schwimmender, auf dem Land und im Wasser sich befindender und nährender Thiere etc - a three-volume wildlife tome published between 1748 and 1756 in Nuremberg, Germany.

As can be readily perceived from this engraving, however, whatever the creature depicted by it may be, it is certainly not a hound, nor, indeed, a canid, of any kind (wild and/or American notwithstanding!). So what is it?

When I first looked at it, I initially thought of the Virginia opossum Didelphis virginiana, because the engraved creature does bear a degree of overall resemblance to this largest and most famous of modern-day New World marsupials. I even found an online photo of the Virginia opossum, reproduced here, that vaguely recalls it. 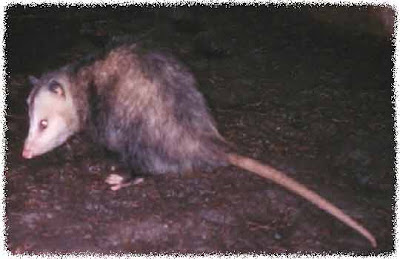 
Even so, Meyer’s mystery beast can be readily differentiated by its wholly brown colouration, in particular its dark face and its body’s extremely short, uniformly brown fur – in stark contrast to the white face and the longer, shaggy, grey body fur of the Virginia opossum. Meyer’s beast may have a bare tail, which, if so, likens it to the latter species, but, equally, it may simply have very short fur – the engraving does not make this clear. 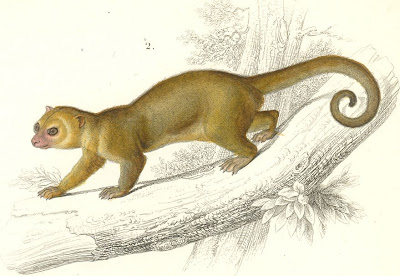 
In addition to the Virginia opossum, I have also considered those uniformly brown-furred, Neotropical raccoon cousins known respectively as the kinkajou Potos flavus and the olingos (a quartet of Bassaricyon species, including the recently-discovered olinguito B. neblina). Again, as shown here, superficially these are somewhat similar to Meyer’s beast, but none of them is native to North America. 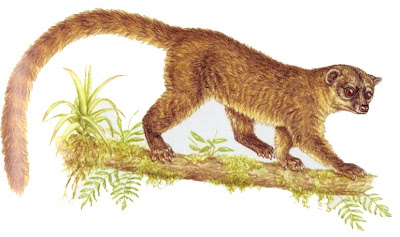 
So unless the ‘American’ in ‘wild American hound’ was being used in its very broadest sense, i.e. appertaining to anywhere within the entire New World, rather than its much more common and more specific usage as a contraction of the United States of America, I have once again come to a halt in my search for this mystifying mammal’s taxonomic identity – unless, gentle readers, you could offer any suggestions or additional information? If so, please post details here, as I’d very greatly welcome them!

I recently purchased a copy of the 2011 reprint of German publisher Taschen's modern-day (2001) reproduction compendium of all of the sumptuous colour plates that originally appeared in a gloriously-illustrated tome first published in four volumes from 1734 to 1765. Commissioned by Albertus Seba, one of the most celebrated collectors of natural history specimens ever (click here for more details regarding Seba in a separate ShukerNature blog post), this tome, or Thesaurus as it was entitled, was basically a lavish catalogue of his two internationally-renowned collections' specimens, each of which was described in Latin by Seba and supplemented by footnotes in French (the text from his Thesaurus is not included in the Taschen plates compendium).

Browsing through the Taschen compendium of the Seba Thesaurus's innumerable pictures, and marvelling at their detail, colour, and precision, I was startled to discover that one of the plates (specifically Plate 30 in what was Vol. 1 of Seba's Thesaurus) contained what was evidently the original illustration upon which the version from Johann Daniel Meyer's tome that opens this present ShukerNature blog post was based (and then reproduced in mirror-image format). For not only is the Seba version of this illustration much more detailed, but Vol. 1 of his Thesaurus (i.e. the volume that contained it) was published in 1734, more than a decade before the first volume of Meyer's tome. Here, then, was the original wild American hound, and the plate in question is duly reproduced below: 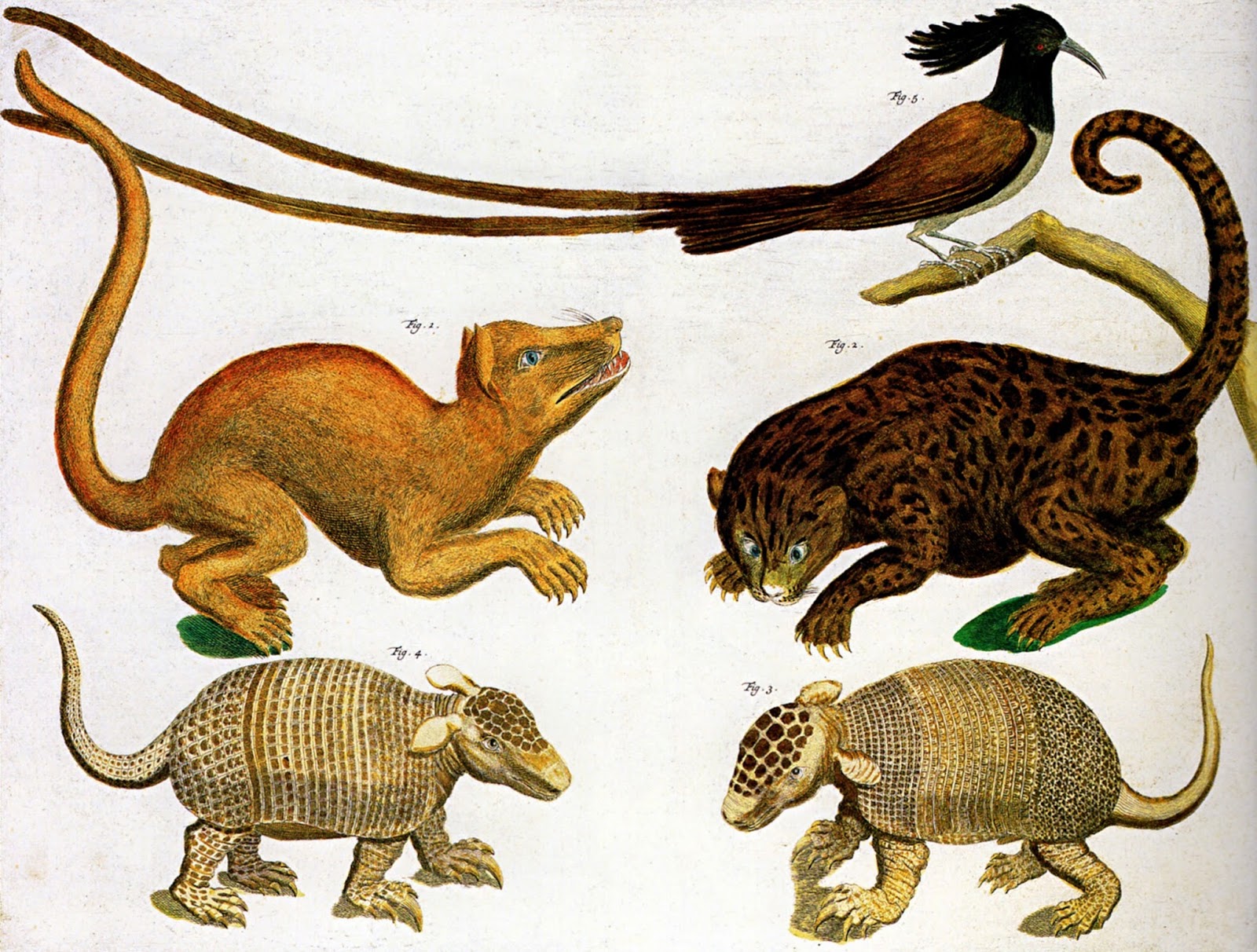 Plate 30 of Vol. 1 of Albertus Seba's Thesaurus - the wild American hound is positioned directly beneath the long tail plumes of the paradise flycatcher above it

Surely, therefore, Seba's historic tome would provide me with the long-awaited solution to the mystery of this enigmatic mammal's taxonomic identity? In reality, the mystery only deepened. In Taschen's modern reprint of Seba's Thesaurus, the compilers have valiantly attempted to identify all of the many species depicted in it, and have included these proposed identities beneath each plate. Many are recognisably correct.

When I looked to see their identity for the wild American hound, however, I was nothing if not startled to discover that they had labelled it as a mongoose, and had even included these creatures' taxonomic family name, Herpestidae, albeit with visible trepidation (a question mark had been added directly after it in parentheses). Yet if this individual had truly originated in America, it was highly unlikely to have been a mongoose, because these mammals are confined entirely to the Old World, True, mongooses have been deliberately introduced to several Caribbean islands, where they still thrive today. However, this misguided course of action (they prey upon many of the islands' rare, indigenous species) was only initiated during the early 1870s, i.e. over a century after the wild American hound had appeared in Seba's Thesaurus.

But that was not the end of the riddles and revelations exposed in Seba's Thesaurus. Turning to the Taschen plates compendium's specially-written introduction by its compilers, I discovered that the same illustration of the wild American hound was included there too, but this time unencumbered by the other creatures that were present alongside it in Plate 30, and reproduced in slightly larger size too. Here is this version: 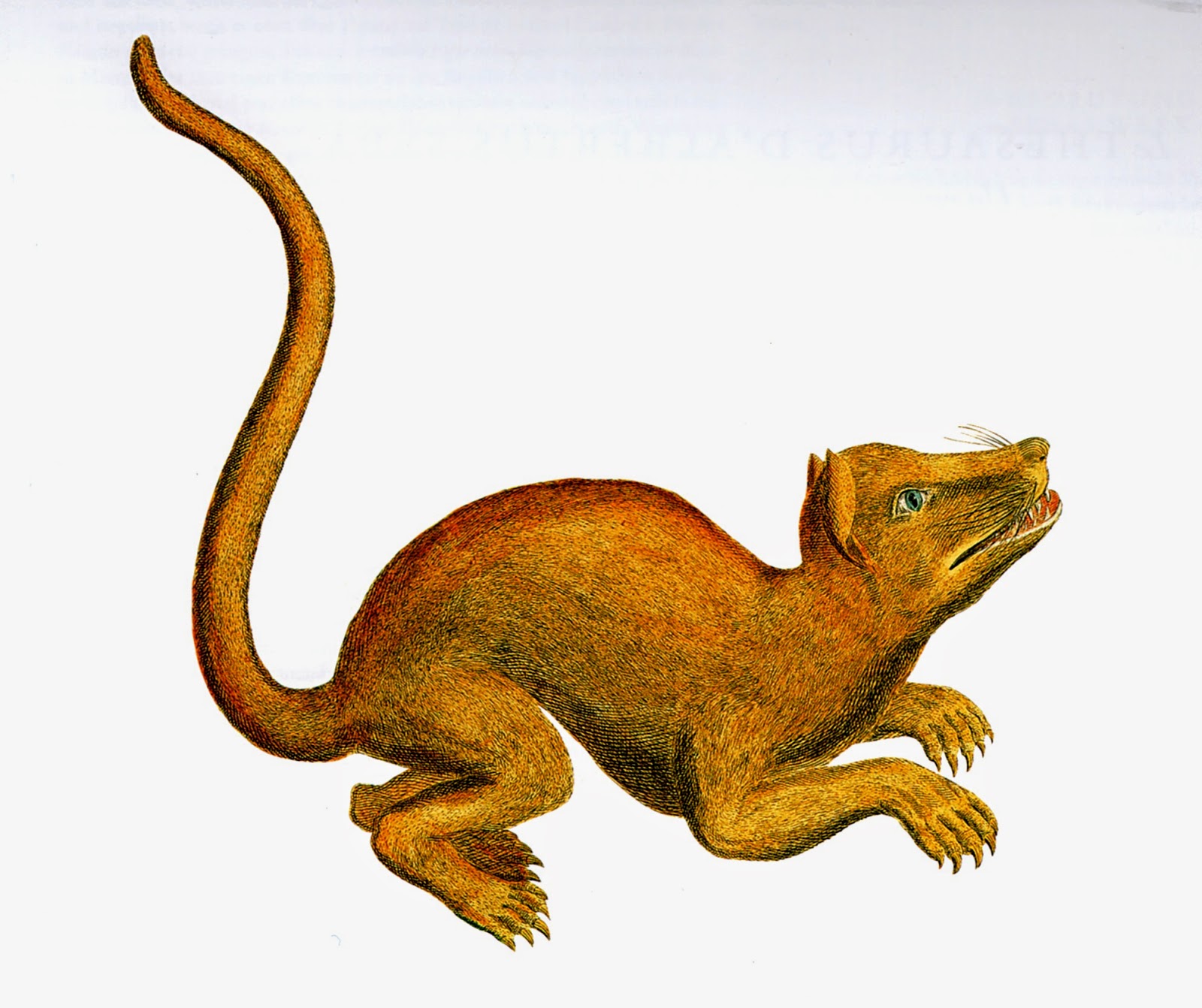 What made this especially interesting, however, was that the compilers had included beneath the illustration here Seba's own original description of what it was. Namely, "Wild dog from America with a very long tail". Obviously no mongoose, therefore, and clearly the origin of the name that Meyer had used for this animal in his own tome. Sadly, however, this does not assist in the latter's identification. However, perusing the Seba Thesaurus's better-quality illustration of it I realised that its overall body form, coupled with its long snout and extremely long tail, was reminiscent of the common coati Nasua narica, which is native to certain of the southernmost states of the USA, and lacks the vivid tail banding that is such a characteristic feature of its familiar South American relative, the aptly-named ring-tailed coati N. nasua.

Although the images in Seba's Thesaurus are very pleasing aesthetically, not all of them are especially accurate zoologically. So could the wild American hound illustration simply be a not overtly-accurate representation of the common coati? Interestingly, when moving about on the ground on all fours, coatis sometimes hold their lengthy tails up vertically or semi-vertically, corresponding well with the pose portrayed by the wild American hound in the Seba Thesaurus's illustration.

The only way to be certain, however, is if the specimen that this bemusing picture depicts could be traced and examined. Many of the specimens from Seba's first collection are housed in the present-day Russian Academy of Sciences, and several (but by no means all) specimens from his second collection are also housed there (the remainder were sold off to a wide range of buyers, so may now be untraceable, always assuming that they have survived to the present day anyway). Perhaps somewhere among those many exhibits is Seba's wild American hound, still awaiting a conclusive taxonomic identification?

Today I succeeded in tracking down online a pdf of the original, complete Seba's Thesaurus, containing not just the plates but also Seba's bilingual (Latin and French) descriptions of the animals depicted in the plates. Seeking out his description of the wild American hound in the hope that now I would finally discover exactly what it was, I was disappointed to find that Seba's description was only very short and consisted almost entirely of just a verbal morphological description of what can be readily observed in the plate's portrayal of this animal, e.g. its tail is very long, its fur is brown, its ears are small and erect, its eyes are large, etc.


Seba's description in French of the wild American hound, from Vol. 1 of his Thesaurus (1734)

However, it did also contain two tantalising but mystifying snippets. Seba stated that he had been sent his specimen of the wild American hound from what he referred to as the Promontory of Tiburon on the island of Martinique, and that it plundered in the forests ("il vit de rapine dans les forêts"). Did this phrase mean that it raided other animals' dens or birds' nests? As for its provenance, I have been unable to locate any Promontory of Tiburon present on the Caribbean island of Martinique, and none of the sparse number of mammalian species known to have inhabited it during the 18th Century (when Seba prepared his Thesaurus) matches the appearance of the wild hound of America (mongooses, as already noted, were not introduced into any Caribbean islands until the 1870s). Intriguingly, however, there is a forested region in California, USA, known as the Promontory of Tiburon. So could Seba have somehow mistaken the location of this promontory, wrongly claiming it to be on Martinique, so that in reality his wild hound of America specimen derived from California instead? This mystery becomes ever more mysterious! Stay tuned for further installments as my investigations into this very curious cryptid continue.