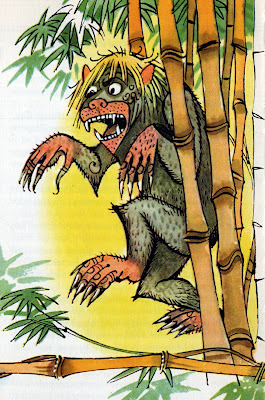 The nung-guama (Vojtěch Kubašta)
Right from early childhood, I have always greatly enjoyed reading myths, folktales, and legends from around the globe – attracted at least in part, no doubt, to the fact that they often included a wide assortment of fantastical fauna – and even as a youngster I rapidly acquired a sizeable collection of books retelling the most famous and also many not-so-famous stories from world folklore.
One of my favourites, bought for me during the mid-1960s but which I still own today, was a wonderful volume entitled Once Long Ago: Folk and Fairy Tales of the World. First published in 1962 by Golden Pleasure Books Ltd (London), it contained no less than 70 folktales, drawn from cultures throughout the world, which were skilfully retold by eminent fantasy writer Roger Lancelyn Green (1918-1987), and beautifully illustrated by Czech artist Vojtěch Kubašta.
Many marvellous beasts of legend and lore appeared in them, including a diverse array of dragons, magical birds, mermaids, a formidable griffin, and Australia’s mighty bunyip. In addition to those familiar mythical creatures, however, were two that I had never previously heard of - and, over 40 years after first reading that book, I have still never encountered any notable additional details regarding either of them in any other publication. 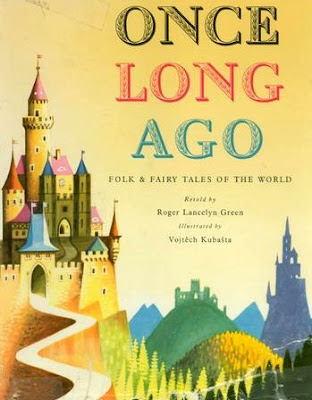 Flicking through my much-treasured (if rather careworn) copy of Once Long Ago again recently, I was reminded of these twin enigmas, so I’ve decided to present what little I know of them here, in case anyone else can add to my scant knowledge.
THE NUNG-GUAMA – A MONSTROUS CHINESE MYSTERY
Featuring in a Chinese folktale entitled ‘The Nung-Guama’, which told of how a series of kind passers-by helped a poor widow woman to defeat all attempts by this eponymous monster to devour her, it was succinctly described by its intended victim in the story as follows:
“His body was like a bull, and its head was as big as a wine-jar. His feet were big and soft and floppy: I could hear them going ‘Flap-flosh’ as he walked. And he had dirty hair and horrid hands with big, sharp claws.”
It was also said to enjoy the taste of human flesh above all other food but was an infamously messy eater, it had a howling “squelchy” speaking voice, it was apparently nocturnal (as it told the widow that it would come back that night to devour her), and it first emerged from out of a clump of bamboo directly in front of the terrified woman. The story was illustrated with several pictures by Kubašta, including two of the nung-guama, one of which opens this present blog post of mine. These images suggest some form of man-beast, perhaps even the Chinese yeren, or at least an ape-like primate.
Several other retellings of this tale are known to me, including an entire 32-page children’s reading book, The Nung-Guama, written again by Green, and republished in 1991 by BBC Books with delightful illustrations by Aileen Raistrick. These latter pictures portray it as a savage green biped with tusks and horns – which, at least in my fevered imagination, calls to mind an extraordinary hybrid of Shrek and the Gruffalo!
All of the versions of this folktale that I have seen tell much the same story, but apart from sometimes mentioning that it crunches bones, they offer precious little descriptive details regarding the mystifying nung-guama (or nung-gwama, as spelt in one retelling). 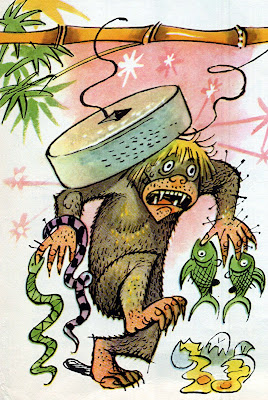 The defeated nung-guama (Vojtěch Kubašta)
So what is this seemingly-obscure creature? A wholly imaginary Chinese equivalent of Western ogres, hobgoblins, demons, or suchlike? Alternatively, could it be a mythicised form of some known animal species – or even a bona fide cryptid? With so little information to hand, it is extremely risky to attempt any kind of formal identification for the nung-guama – unless there are readers out there who have additional information or can shed further light upon this subject...?
THE NYAMATSANE – A BASUTO MEGA-BABOON OR MINI MAN-BEAST?
The second mysterious entity from Once Long Ago was another eponymous being, featuring in a Basuto folktale entitled ‘The Nyamatsanes’. In this story, the wife of a brave warrior living in an unnamed arid land (but presumably within Lesotho, formerly known as Basutoland) suddenly developed an insatiable craving for the liver of a nyamatsane. Eventually, the warrior agreed to go out and kill one, and bring back its liver for her to eat. When he reached the place where these creatures lived, however, they had all gone off hunting, except for their very old, feeble grandmother, whom the warrior promptly killed and skinned, after which he cut out her liver. Before he could depart, however, the nyamatsanes returned, so he disguised himself as their grandmother, and succeeded in fooling them, even though they were convinced that they could smell human flesh. When they fell asleep that night, he fled, but as soon as they discovered their dead grandmother’s body the next morning they chased after him in fury, but he eventually eluded them.
Strangely, however, although the nyamatsanes featured extensively throughout this story, Green’s version of it contained no morphological details whatsoever concerning them. Even Kubašta’s illustraton, included here, depicted them only in the most basic, minimalist manner – namely, as dark-coloured, tailless, superficially monkey-like entities with featureless faces, predominantly quadrupedal in gait yet also capable of standing and even cavorting bipedally, but shorter in stature than the human warrior. The only details of note that can be gleaned from Green’s retelling are that these beings are carnivorous (they were out hunting when the warrior arrived in their domain, plus they are very attuned to the scent of human flesh), and, very oddly, that they are extremely partial to eating pebbles (to aid digestion, perhaps?).
The nyamatsanes’ folktale appears in similar form within various compendia of African legends, sometimes as the opening section of a much longer story featuring the hare as a trickster, but – as with the nung-guama – extra details concerning them are conspicuous only by their absence.
Indeed, the only attempt to categorise the nyamatsane in any way at all that I have so far encountered appears in Jan Knappert’s book Myths and Legends of Botswana, Lesotho, and Swaziland (1985). Included as folktale #43 within a section entitled ‘The Oldest Tales’, during this story’s retelling Knappert briefly states:
“Although the Nyamatsane are supposed to speak fluent if funny Sesotho [the national, Bantu language of Lesotho] they are rather pictured as a sort of baboon or man-ape.”
This verbal description accords well with Kubašta’s depiction of them in Once Long Ago – the only illustration of nyamatsanes that I have ever seen. So what could they be?

The nyamatsanes (Vojtěch Kubašta)
As suggested for the nung-guama in relation to Chinese myths, they are quite probably nothing more than non-existent entities of African legend, akin to the goblins and other quasi-humanoids of our own traditional folklore. Then again, southern Africa is replete with reports and alleged sightings of diminutive man-beasts likened by Dr Bernard Heuvelmans and various other cryptozoologists to surviving australopithecines, as well as claims of fierce, extra-large monkeys that have been compared with certain species of supposedly extinct giant baboon. Should we therefore be adding the nyamatsanes to the Dark Continent’s already-lengthy list of crypto-primates?
Personally, I consider it imperative that before even the most desultory consideration of these beings’ possible taxonomic identity is attempted, we obtain substantially more descriptive information concerning them, especially with regard to their morphology and behaviour.
Consequently, as with the nung-guama yet again, if there is anyone out there with such data to hand, I’d very much like to hear from you and see it posted here – so that the nung-guama and the nyamatsane may ultimately become more than just memories from once long ago.

In view of the considerable interest and conjectures stimulated by the content of this ShukerNature post, I am presenting below scans of the original pages from my copy of Once Long Ago in which Roger Lancelyn Green told the Chinese folktale of the nung-guama and the Basuto folktale of the nyamatsanes, with illustrations by Vojtěch Kubašta, so that you can read the full stories. Please note that these are © Golden Pleasure Books Ltd (London), Roger Lancelyn Green, and Vojtěch Kubašta. 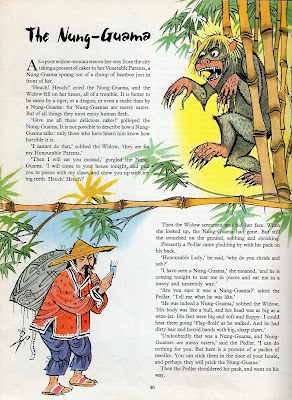 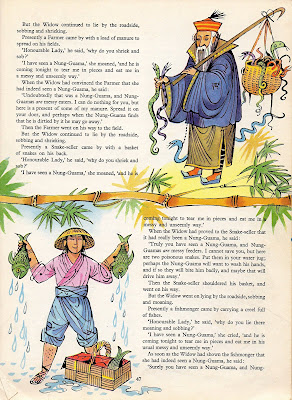 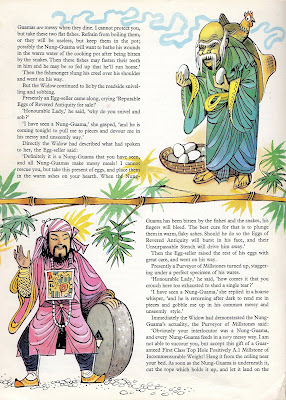 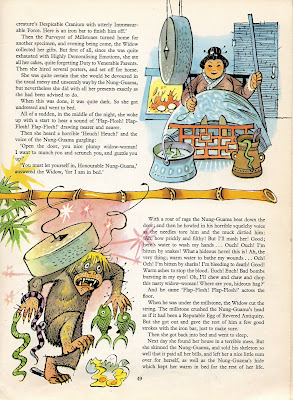 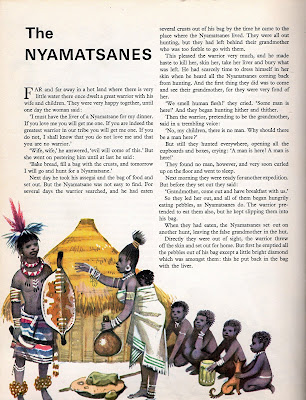 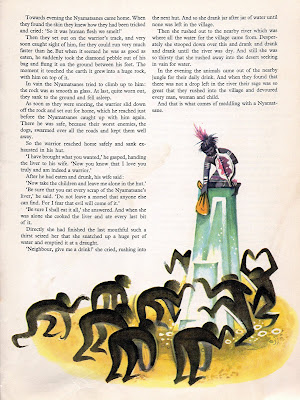