THE WINGS OF A WINGED CAT - FROM MY CABINET OF CURIOSITIES 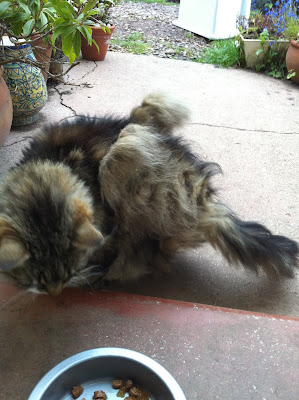 What do you give the cryptozoologist who has everything? (Yeah, right – if only!) Why, the wings from a winged cat, of course
Reading the CFZ bloggo's amusing April Fool's account of a quasi winged cat, it reminded me of the time that I received through the post a most unexpected but extremely welcome memento of the real thing!
On 14 September 2010, Paul Sieveking of Fortean Times forwarded to me the following details of a feral winged cat that was being regularly fed by Scottish journalist Derek Uchman of Montifieth in Angus:
"We have had a very timid stray cat visit our door for food for a couple of years now. As its fur is extremely long and, and we are unable to groom it let alone entice it indoors, it gets very matted. This fur then slowly peels back to reveal a pair of "wings". Purely composed of hair they cannot be "flapped" like the cats featured recently in FT. After a period of several months, the whole lot drops off, and the process begins again." 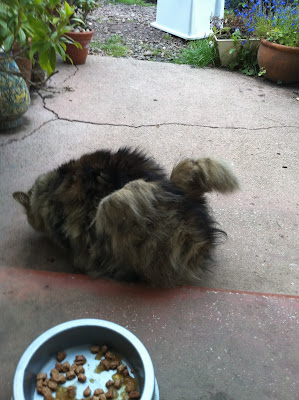 Derek Uchman’s feral winged cat with wings still present - back view (Derek Uchman)
As I exclusively revealed back in the early 1990s, in many cases of winged cats the phenomenon is caused by a recessive mutant gene whose expression results in a very unusual skin-related condition known as feline cutaneous asthenia (FCA). The skin of a cat exhibiting FCA is hyperextensible (exceptionally elastic) and friable (fragile), which, if it is rubbed or groomed by the cat, causes it to stretch out into furry wing-like extensions that can even be raised and lowered slightly if the extensions contain connective tissue and sufficient musculature. Moreover, because such skin is exceedingly brittle, these extensions readily peel away altogether and drop off, but without resulting in bleeding, thereby explaining reports of winged cats shedding or moulting their wings.
From Derek’s description, however, it was clear that with his particular cat the wings did not derive from FCA but were merely mats of matted fur. Even so, a winged cat is still a winged cat, regardless of the mechanism by which its wings developed.
After contacting Derek directly, I learnt from him that he had retained the wings that the cat had shed a few months ago. Moreover, he was happy to give them to me if I would like them! Needless to say, my reply was such that, just three days later, a Special Delivery package arrived to my home, containing this most remarkable of unnatural history relics. 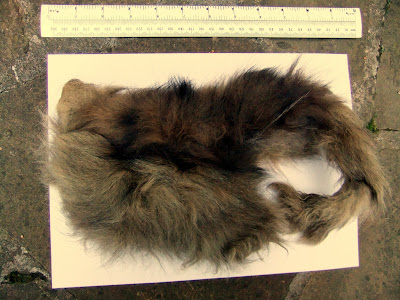 The shed wings of Derek Uchman’s feral winged cat (Dr Karl Shuker)
As seen here, it consists of a thick, matted, yet clean mass of grey-streaked brown fur comprising two extensions (one longer than the other), and is remarkably resilient in texture, even though there is no skin or connective tissue attached. So now, among my many other zoological curios is a sealed transparent case containing the shed wings of a bona fide winged cat.
By the time that I’d received them, Derek’s cat had already begun growing another pair, which led to a very surprising denouement, as Derek revealed to me on 22 November 2010:
"As expected, the second set of wings has fallen off, but they are nowhere to be found! We've searched the garden high and low, but they have disappeared.
"For all intents and purposes, she/he just looks like a normal cat now, but I think the beginnings of a third set are starting to form."
All of which confirms that winged cats are indeed very mysterious creatures – and sometimes in more ways than one!
My very sincere and grateful thanks to Derek Uchman for his wonderful gift!
For the most comprehensive coverage of winged cats ever produced, see the chapter on this subject in my book Dr Shuker's Casebook (CFZ Press: Bideford, 2008).
Posted by Dr Karl Shuker at 00:38