A PERFECT DAY FOR THE OOZLUM BIRD, THE OOH-AAH BIRD, AND THE TASMANIAN MOCK WALRUS 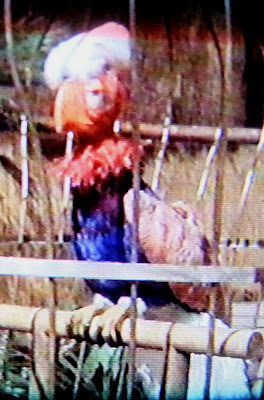 The oozlum bird, in 'Carry On Up The Jungle' (Rank Films)
After much soul-searching, today seems a very appropriate time for me to divulge just how much – or, indeed, exactly how little – I know about three of my all-time favourite creatures of contention.


THE OOZLUM BIRD AND THE OOH-AAH BIRD

Reputedly related to the ostrich, but much smaller and renowned for its brilliantly-hued plumage, the oozlum bird has been unreliably reported from many regions of the world, including South America, Australia, and even the British Isles. Yet although its origin remains uncertain, there can be no room for doubt concerning its ultimate destination.

Just like its famous above-noted relative never does, the oozlum bird is very fond of burying its head when threatened – but not in the sand. This exceptionally shy species prefers a much more intimate hiding place for it. Similarly, it is much given to flying round and round in ever-decreasing circles until, eventually and inevitably, there is only that single, selfsame place left for it to go. And go there it does, head first, with astonishing abruptness and rapidity, until nothing of it remains at all – having quite literally vanished up itself. This very intriguing (if physically impossible) behaviour may help to explain why preserved specimens of the oozlum bird are just as elusive as living ones. Even photos and videos of it are conspicuous only by their absence.

This has led the more unimaginative and mean-spirited members of the ornithological community to suggest that perhaps this wonderful species is, at best, extinct; or, at worst, is wholly legendary, i.e. the oozlum bird does not actually exist. What nonsense! After all, you may as well say the same about the unicorn, centaur, sphinx, or mermaid!

Happily, after long and diligent research, I successfully uncovered a short clip of film testifying to the oozlum bird’s reality. It had been cleverly incorporated into that delightful British comedy movie ‘Carry On Up The Jungle’, no doubt in a bid to conceal it from sceptics and doubters, but I recognised it straight away. So I have included at the opening of this present ShukerNature blog post a still from that film, revealing the oozlum bird in all of its (all-too-) brief glory. In addition, I have been informed that this particular individual is clearly a male specimen, as its oozle is readily visible.

So if there is anyone out there who still harbours any suspicion as to the authenticity of this marvellous species, may I very respectfully suggest that they lose no time in imitating its most celebrated activity?

Incidentally, an equally scurrilous rumour concerns the oozlum bird’s remarkable cousin, the ooh-aah bird – named after the distinctive (and very loud) cry that it gives voice to while laying its unique (and very large) square eggs. However, I can assure you that any such claim is wicked, small-minded, and a complete fabrication – unlike the ooh-aah bird, which is of course neither wicked nor small-minded... :-)

No less fascinating a creature of controversy is the Tasmanian mock walrus. It was first brought to attention in 1984, within an exclusive report by the Orlando Sentinel, a daily newspaper in Florida. According to the report, this extraordinary little creature resembled a bona fide walrus on account of its two very large, protruding tusks, but was only 4 in long, purred like a cat, and had the temperament of a hamster. Moreover, it never needed to be walked or bathed, could be readily trained to use a litter box, and its favourite food was cockroaches – which it ate with such rapacious delight and speed that a single mock walrus would very swiftly rid a house entirely of these verminous insects.

As it was evident that such a creature had the makings of an almost perfect pet, not to mention a highly efficient pest controller, during the early 1980s some mock walruses had allegedly been smuggled into the USA from various lakes in their native Tasmania, and efforts were now being made to breed them. However, this plan had encountered a serious obstacle – the vehement opposition of the American pest-control industry. This was because its cockroach-exterminator members feared for their jobs if the mock walrus became established here, and so were pressuring the US government to ban this species’ legal introduction. Undaunted by such attempts to thwart the mock walrus’s transformation into a popular new pet, however, dozens of readers soon inundated the Orlando Sentinel with calls, enquiring where they could obtain a specimen.

Yet despite such interest in them, no mock walruses were ever forthcoming. A clue to this very odd situation probably lay in the photograph of a mock walrus that was published within the Orlando Sentinel’s report (see photo below). For it showed a creature so similar in appearance to the African naked mole-rat Heterocephalus glaber that it could easily have been mistaken for one - though as the creature in the photo was indeed a naked mole-rat anyway, this wouldn’t have been very surprising. 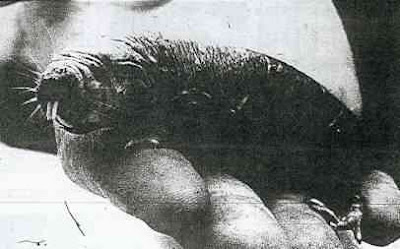 A second, even more direct clue to the mock walrus’s surprising failure to materialise could be found simply by noting the day on which, in 1984, this report and photo had been published within the Orlando Sentinel newspaper – which, by an extraordinary coincidence, just so happened to be the same day as today... :-)
Posted by Dr Karl Shuker at 01:29