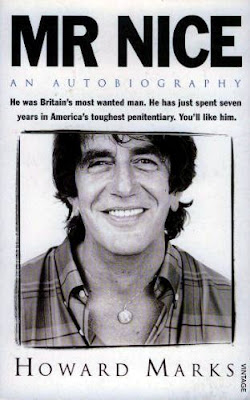 I've said it many times before, but it still bears repeating – reports of mysterious animals can turn up in the most unexpected places. For example: you're hardly likely to discover a report of an extraordinary, unidentified reptile in the autobiography of a major convicted drug smuggler, right? Wrong!

First published in 1996 but soon becoming a runaway international bestseller that has since been reprinted many times, Mr Nice is the autobiography of Howard Marks (its title referring to 'Donald Nice', one of Marks's numerous pseudonyms), whose eventful criminal history is described as follows on the back cover of the 1998 paperback edition published by Vintage:

"During the mid 1980s Howard Marks had forty-three aliases, eighty-nine phone lines and owned twenty-five companies trading throughout the world. At the height of his career he was smuggling consignments of up to thirty tons of marijuana, and had contact with organisations as diverse as MI6, the CIA, the IRA and the Mafia. Following a worldwide operation by the Drug Enforcement Agency, he was busted and sentenced to twenty-five years in prison at Terre Haute Penitentiary, Indiana. He was released in April 1995 after serving seven years of his sentence." 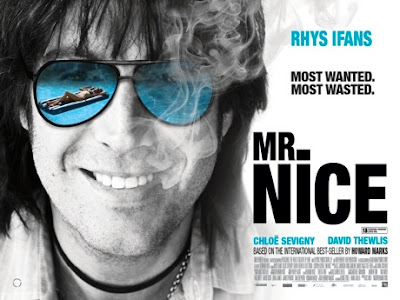 Tucked away amid Marks's recollections of his memorable life of crime, however, is a fascinating but highly unexpected snippet of cryptozoological interest, which reads as follows:

"I had been advised by Raoul to visit Murray Hill Station [in Pakistan] on the borders of Kashmir, a few hours' drive from Islamabad. Foreigners were not allowed to rent cars, so I made a private arrangement with a local taxi-driver who spoke a little English. We were driving on poor roads through the foothills of the Himalayas. I saw and smelt fields of marijuana. A large, five-foot-long, prehistoric-looking lizard ambled across the road in front of us and disappeared into a marijuana bush. The taxi screamed to a halt, and the driver pointed and yelled, 'Krow! Krow!'

"'You want to come to my brother cousin, Mr Nice? I will show you.'

"'Yes, please,' I said, well in the mood for arbitrary adventures with burglars' friends and brother cousins.

"We took a track off the road, drove for miles, and stopped outside an old, meandering group of dusty yellow buildings. An old man dressed in colourful rags came out through a hole in the wall and grunted at the taxi-driver.

"'This is Mohammed, Mr Nice. He is pleased to meet you, Mr Nice.'

"The two babbled away in some unknown tongue and beckoned me into a walled courtyard full of Krows of all sizes. At a signal from Mohammed, one of the Pakistani workers caught hold of a large Krow by its tail, body-slammed it against the high wall, and let go. The Krow stuck to the wall. The Pakistani climbed up the vertical Krow as if it was a ladder. I could see why the Krow was the burglar's best friend but still found it hard to imagine housebreaking with a giant lizard...

"Back at the Holiday Inn, Islamabad, Raoul came round. He confirmed the existence and uses of the Krow."

How surreal is that?! But what could the Krow be?

Its ability to adhere so readily to walls immediately calls to mind the geckos, but there is certainly no known species of gecko that attains a length of 5 ft (the largest, a 'mere' 2 ft long, is Delcourt's giant gecko Hoplodactylus delcourti, known only from a single taxiderm specimen of probable New Zealand origin, and believed to be one and the same species as a reputedly mythical New Zealand lizard known to the Maori people as the kawekaweau). 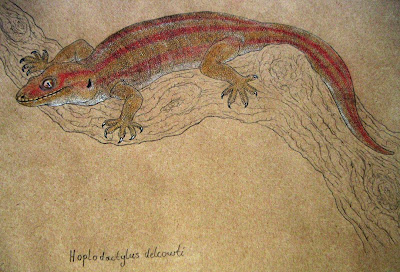 Such dimensions are much more compatible with a species of monitor (varanid), but how proficient are these lizards' wall-gripping abilities, especially while someone is climbing all over them?! And is their nature placid enough for anyone to risk doing this, even if such lizards could grip walls tightly enough to remain in place?

Is there anyone out there who can shed any light on this thoroughly perplexing herpetological mystery? If so, please send in details!

Oh, just one other thing: if by any chance you happen to own a large lizard as a pet, please don't try this at home!

Tonight I read the following fascinating snippet on the Wikipedia page for the Bengal or common Indian monitor Varanus bengalensis, which may well have relevance to the mystery of the krow:

"Monitors are among the most intelligent of reptiles, and can be domesticated and trained to a limited extent, though they are not the most docile of pets. They have strong claws they use for climbing; and a popular legend has it that Shivaji's general, Tanaji Malusare [Shivaji being the 17th-Century founder and sovereign of the Maratha Empire), used a pet monitor with a rope tied around its belly as an aid to climbing the walls of the Sinhagad fort in the Battle of Sinhagad. (This use of monitor lizards was fairly prevalent in western India: a Maratha family, Ghorpade, took its name from individuals who specialized in training and using monitors for this purpose.)"

Judging from this information, the krow may indeed be a species of varanid after all, conceivably even this very same one. Another cryptozoological mystery solved?