PREDATOR DEATHMATCH - MEET NICK MOLLOY AND HIS BATTLES OF THE BEHEMOTHS! 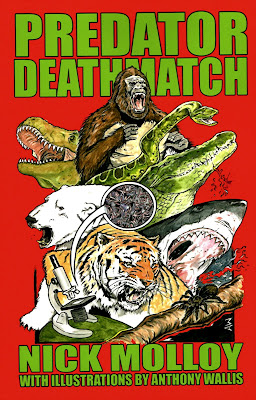 Over the years, I have penned a number of forewords to other writers' books, the vast majority of which have been, to varying extents, of a cryptozoological nature. However, in recent times there has been one very notable exception to this trend – Nick Molloy's superb book Predator Deathmatch. I soon discovered that not only was it unlike any book that I'd contributed a foreword to before, but it was unlike any book that I'd ever read before – and it thoroughly captivated me.

Consequently, as I'm sure that you'll enjoy this uniquely engrossing book just as much as I have done – and continue to do – here is my foreword to it, which explains precisely why I consider it so special, and why I feel certain that once you've bought it and read it you will too.

"Every so often - but nowhere near often enough! - a book is published whose premise is so entertaining and thoroughly original that it seems incredible no-one has thought of writing just such a book long ago. Predator Deathmatch fits this description perfectly. The basic idea is simplicity itself - who would win a battle between two seriously major predators? 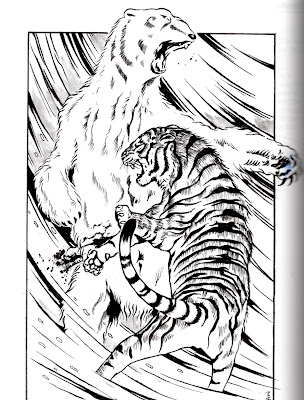 "Each chapter pairs contenders from various ecosystems and time periods, setting up ‘fight to the kill’ matches between the polar bear and Siberian tiger, prehistory’s monstrous giant shark megalodon and a comparably formidable marine reptile of pliosaurian persuasion, the sperm whale and the giant squid, and so forth. Nick's vivid accounts of how he would expect these titanic slugfests to shape out make exciting reading, but what enhances his coverage immeasurably is the painstaking degree of factual research and provision of background pre- and post-fight information that he also provides. 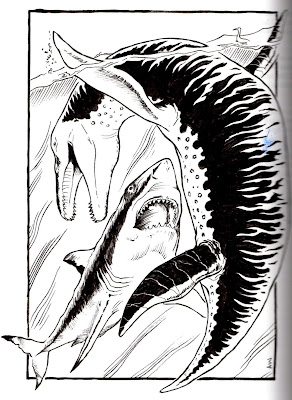 "Moreover, whereas a welter of facts and figures might in the wrong hands be off-putting and even counterproductive to retaining the reader’s interest, thanks to Nick's deft, infectiously enthusiastic style of writing, laced throughout with scintillating flashes of dry humour, the very substantial body of data that he incorporates into each chapter actually serves to engage interest even further. The net result is a book that is near-impossible to put down once you have begun reading it – after initially planning to read just the first chapter to begin with, simply to gain a feel for its style and depth before reading further, I found myself reading the entire manuscript from cover to cover at a single sitting, and enjoying every page of it immensely. Adding even further to my pleasure were its spectacular illustrations by Anthony Wallis [reproduced here in this present ShukerNature blog post], which bring these mighty antagonists so vividly to life. 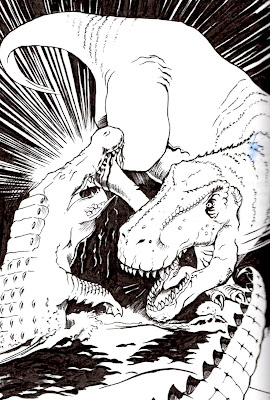 "So if you’ve ever wondered who would emerge victorious should a great white shark and a killer whale clash lethally in the high seas, or if T. rex and a primeval mega-croc experienced a truly fatal encounter, or if Komodo’s veritable dragon should somehow find itself assailing an anaconda of Pythonesque proportions, prepare for all of your questions – and many others that you hadn’t even got around to posing – to be answered within the pages of this superb book, where the gladiators of past and present, land and sea are only awaiting your private audience before commencing their deadly duels. 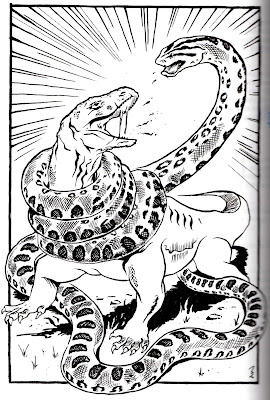 "After all, who needs boxing and wrestling, or even cage fighting, when the greatest and most bloodthirsty marauders ever to stride this planet – like the bona fide colossi that they are, were, and remain – are ready to perform at your personal behest? So take your seat ringside, and don’t forget your popcorn!" 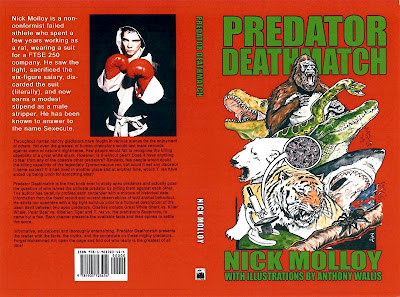