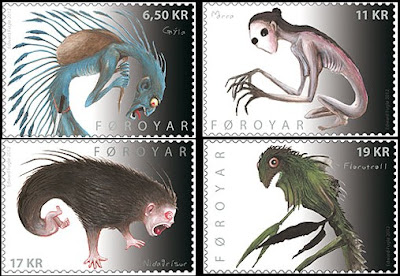 Iceland is not the only island nation from the far north of Europe that has lately issued a set of postage stamps with a theme bridging cryptozoology and animal mythology – as documented by me in the previous ShukerNature blog post (click here).

On 30 April 2012, the Faroes issued a set of four very distinctive stamps depicting a quartet of legendary entities endemic to their own land's ancient traditions.

Portrayed on the 6.50 króna stamp is the gryla, which occupies the traditional bogeyman role here, but is also sometimes described as a hairy ogre-like giant or man-beast. During carnival time at Shrovetide in the Faroes, children dress up in festive, imaginative costumes and visit houses to receive sweets and other treats, rather like the 'Trick or Treat' custom at Halloween elsewhere. And according to folklore, the gryla also wanders around at this time, carrying a big sack, inside which he drops any child who has breached the Lent fasting.

The mera or mare pictured on the 11 króna stamp is the original nightmare - a monster that appears at night, often adopting the guise of a beautiful woman according to Faroese belief, and sits upon a sleeping person's body, suppressing their breathing as well as disturbing their sleep, stimulating evil, frightening dreams. Worse still, if it succeeds in inserting its long skeletally-slender fingers into the sleeper's mouth and counts all of their teeth, that person will die.

Even more eerie and grotesque is the entity depicted on the 17 króna stamp, for this is the niðagrísur - the ghost of a newborn or infant child who was murdered without ever having been christened. As a result, the child returns to earth as a niðagrísur, an apparition no bigger than a ball of yarn, in search of its missing name, but it will disappear forever if it is finally given one.

Last but definitely not least is the florutroll or Faroese beach troll, featuring on the 19 króna stamp. Despite its horrifying appearance, covered in seaweed and pebbles, the florutroll serves an important, beneficial function – by scaring children away from the beach, it shields them from the danger of drowning in the sea or being swept away in the raging waves and surf.

Having seen such interesting stamps as these two series from Iceland and the Faroes, it is to be hoped that other nations will consider issuing comparable series focusing upon legendary entities from their own traditions, because they would definitely make fascinating additions not only to philately but also to the artwork and archives of zoomythology and cryptozoology.
Posted by Dr Karl Shuker at 22:28