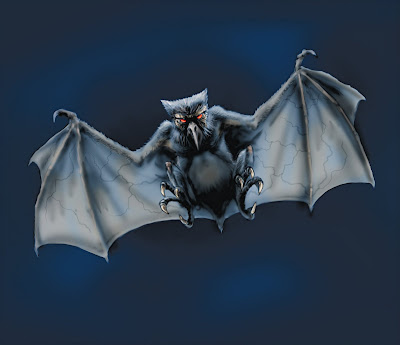 
The following winged wonder only became known to me in mid-October 2007, when Jan Patience, acting editor of the now-defunct British monthly magazine Beyond for which I contributed a major cryptozoology article each issue, brought to my attention a truly extraordinary email that she had just received from a reader. At that time, I was preparing a lead article on lesser-known British mystery beasts for the next issue of the magazine, so the email reached me in time for me to investigate it further and include a full account of the case in my article (Beyond, January 2008), and it is this account of mine that I shall now quote from here.

The email in question had been sent by Jacki Hartley of Tunbridge Wells, Kent, concerning a truly bizarre beast that she claims to have encountered on three totally separate occasions, and which she reported as follows:

"Back in 1969 I was 4 years old and travelling back from my auntie’s house in London. Dad had been driving for about half an hour and we were going through the countryside. I was in the back of the car when I suddenly heard an awful, screeching scream. Mum and dad were in the front chatting and heard nothing. It was twilight and as I looked out of the back window into the trees, I saw what I could only describe as a monster.

"It had bat wings which it unfolded and stretched out before folding back up again, red eyes and a kind of monster monkey face with a parrot's beak and was about 3 feet in height.

"To my 4 year old mind it was terrifying and I had nightmares for weeks. I did not have a name for this thing in my vocabulary and so called it The Bat Winged Monkey Bird as it seemed to be such a weird mixture of animals.

"I saw it again late one night when I was eleven from the back window of the car on our way home from Hastings, I think we were travelling through Robertsbridge and I saw it for the third time last year.

"It was 4.30 in the morning and I was woken by the same horrible screeching sound. Thinking someone was being murdered in the street I jumped out of bed and ran to the window, catching the tail end of it as it flew past. I knew immediately what it was. . .the same horrible monster thing I had seen all those years ago, The Bat Winged Monkey Bird was back.

"I would be very grateful if you or any of your readers could shed any light on or put a name to this thing."

When Jan forwarded Jacki’s email to me, I was naturally extremely intrigued, and replied directly to it, requesting any further information that Jacki could send. 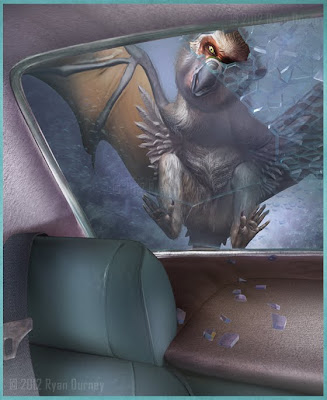 Close encounter with the bat-winged monkey-bird! (Ryan Durney/Birds of Lore)

In response, I received this second email, together with two accompanying pictures, one of which is Jacki’s own representation of what she saw, and the other a photo of her taken at the age when she experienced her first sighting of the monkey-bird:

"My most recent sighting was at 4.30am on 19-10-06 outside my bedroom window, I saw the tail end of it fly past after the awful screeching noise woke me up, my address is in Tunbridge Wells in Kent.

"The time before that I was on my way back from Hastings in Sussex, having just passed through Robertsbridge. While the first time I saw it, we were coming back from London, heading toward Kent and had been travelling for about 20-30 minutes. The creature was sitting in a tree in a field off to my right.

"As for my parents, they just laughed and said I must have fallen asleep and had a nightmare; they weren't interested and simply dismissed it, even though I had nightmares about it coming to get me.

"Although the creature looked solid flesh and blood and made an awful sound, I think it could be paranormal in origin as I have never seen or read about anything that even vaguely resembles it, but if it is real, I would love to know if anyone else has seen it." 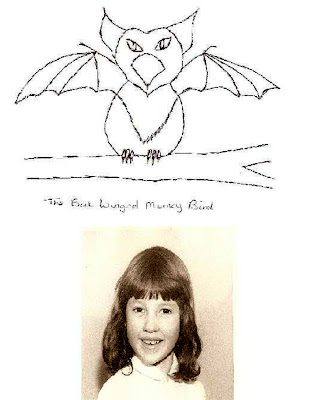 Jacki Hartley’s sketch of the bat-winged monkey-bird, and a photograph taken of her at the age when she first saw it (Jacki Hartley)

There is no doubt that this grotesque entity as described by Jacki does not correspond even vaguely with any known species of animal native to Britain. And even when venturing beyond the known into the realms of cryptozoology and zooform phenomena, there is little to compare with it, especially from the British Isles. Perhaps the nearest is the Cornish owlman, a weird owl-human composite spied in the vicinity of Mawnan Church Cornwall, mostly during the 1970s, and discussed later here. Remarkably, however, as I discussed in my Beyond article, Jacki’s creature is certainly reminiscent of the Raymondville man-bat(s), for which there has never been a satisfactorily explanation. 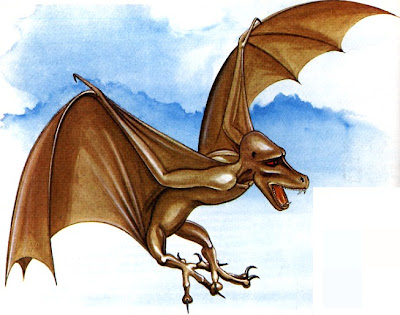 Consequently, here, for anyone who may be unfamiliar with the latter, is a summary of the Raymondville man-bat case, together with a similar one subsequently reported from LaCrosse, Illinois, as quoted from my book Dr Shuker's Casebook (2008):

"Sitting in his mother-in-law's backyard at Raymondville, Texas, on the evening of 14January 1976, Armando Grimaldo suddenly heard a strange whistling, and a sound that reminded him of flapping bats' wings - a highly pertinent comparison, as it turned out. For just a few seconds later, he was attacked by a man-sized monstrosity with the face of a bat or monkey, a pair of large flaming eyes but no beak, dark, leathery, unfeathered skin, and a pair of huge wings yielding a massive 10-12 ft wingspan (i.e. twice that of any known species of bat). Swooping down at the terrified man, the creature snatched at him with its big claws, but, happily, Grimaldo was able to flee inside before his aerial attacker had inflicted any serious injuries. Nevertheless, his encounter was just one of several on file from this particular region of Texas during early 1976, all documenting sightings of a similar entity.

"Another ‘man-bat’, 6-7-ft tall with a leathery 10-12-ft wingspan, clawed hands and feet, yellow eyes, well-delineated ears, and revealing a huge snarling mouth brimming with teeth, almost flew into the windscreen of a 53-year-old man, Wohali, as he was driving his truck (with his 25-year-old son as passenger) along a road near LaCrosse, Wisconsin, just after 9 pm on the evening of 26 September 2006. The creature then flew back up into the sky and vanished, but the shock of encountering it was such that both men became physically sick. They were convinced that it was a physical, tangible entity. This remarkable case has been documented in detail online by Linda Godfrey at http://www.cnb-scene.com/manbat.html" 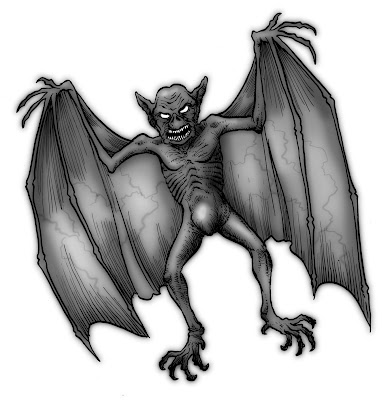 Returning to Britain's bat-winged monkey-bird: What is also very strange about Jacki’s report is that she saw the creature in three very different geographical localities and over a considerable period of time, yet without any other eyewitnesses apparently having seen it – or have they? This is where you, gentle readers, come in. 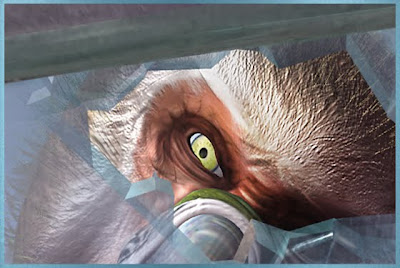 Keeping an eye on the bat-winged monkey-bird...or is it the other way round?! (Ryan Durney/Birds of Lore)

Like Jacki, I would love to know if anyone out there has indeed seen this extraordinary creature, or something like it. So if you have, please get in touch with any details that you can provide. I now declare the case of the bat-winged monkey-bird well and truly open for online investigation! 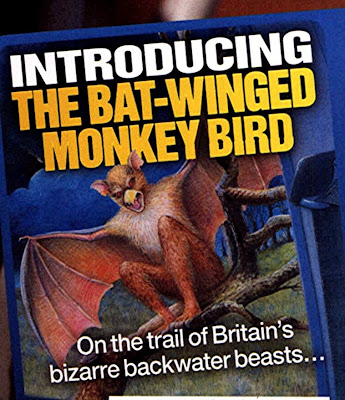 Bat-winged monkey-bird as illustrated in colour for the front cover of the January 2008 issue of Beyond, containing my article on lesser-known British mystery beasts (Philippa Foster)
Posted by Dr Karl Shuker at 23:21