THE TENGU - AN EXCLUSIVE EXCERPT FROM MY FORTHCOMING BOOK, 'CREATURES OF SHADOW AND NIGHT' 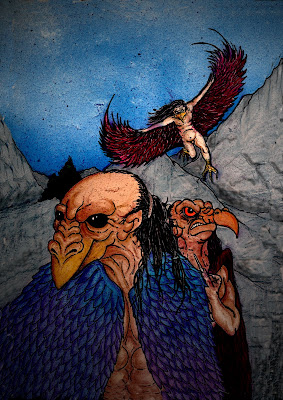 
Earlier this month, a very different book of mine was formally accepted for publication by Coachwhip of Landisville, USA (the company that also published my most recent book in print, The Encyclopaedia of New and Rediscovered Animals, 2012). A most exciting venture and a marked departure from my previous books and writing style, it is entitled Creatures of Shadow and Night, and in it I shall be retelling the folklore and legends of a wide range of sinister and decidedly dark supernatural entities of the night, most of which are relatively or entirely unknown outside their respective homelands. Moreover, each of my verbal portrayals will be accompanied visually by a spectacular full-colour illustration specially prepared by highly-acclaimed graphics artist Andy Paciorek. Now, presenting a tantalising taster of what is to come, here as a ShukerNature exclusive is one of the entries from our book, combining my text with Andy's artwork. We hope that you enjoy it!

They look like men, until they extend their shadow-pinioned wings and soar skyward. They speak like men, until they turn around and reveal their vulturine faces and hooked raptorial beaks. Mercurial, mischievous, merciless, the Japanese tengus of forest and mountain, and also their Filipino counterparts the alan, can be many things; they will even offer comfort and assistance to humans sometimes - but only sometimes...

The evening had grown dark, but to the Buddhist priest, journeying through the densest, gloomiest portion of the great forest, and enveloped in its grim shroud of shadows, it made little difference. And yet, just up ahead, he was certain that he could discern something glimmering, something that grew steadily brighter as he drew nearer. Suddenly, the thick foliage fell aside, and as he stepped out into a clearing, he gasped in surprise.

Suspended from a sturdy branch of the tall tree standing at the very centre of the clearing was what looked exactly like an enormous birdcage, but a birdcage wrought of gleaming, lustrous gold, which glowed so brightly that the priest was forced to shield his eyes as he gazed at it.

And as he did so, he realised that the cage was not empty. Hanging upside-down inside it was an extraordinary creature – or was it a human? Just like the cage, it too glowed, but with a strange phosphorescence that disturbed yet also delighted the priest, drawing him ever closer until he stood directly before it. Looking through the cage’s bars, his eyes met those of the creature, who seemed to be wrapped in a long feathered cloak, and whose eyes held his in thrall.

Suddenly, the priest felt an uncontrollable desire to open the cage, to become one with its uncanny occupant, but how? He had no key. Still staring into the creature’s unblinking, unfathomable eyes, he felt his hand rise towards the door of the cage. Instinctively, he pulled it back, but then, relenting, he allowed his hand to move forward again, until it rested upon the door’s ornate keyhole. He heard a single faint click, and saw the door begin to swing open, and then...nothing!

The priest’s eyes felt heavy and dim as he struggled to open them, as if they had been bound with a thousand cobwebs of deftly-spun silver. And there, standing before him, stood the tengu. Oh, he recognised it now, and as he looked at it, the tengu’s feathered ‘cloak’ unfurled, transforming into a pair of huge wings. It looked at the priest for a long, silent moment, then threw back its bald avian head, opened its sharp curved beak, and laughed – a terrible, screaming, heart-tearing sound that echoed through the clearing.

Its wings opened fully, and without warning the tengu rose rapidly into the sky, circling above the clearing just once before wheeling far away through the sombre night, leaving behind the hapless priest, imprisoned inside its bright golden cage for however long it would be before anyone else came through this lonely forest and found him there. Or - if days became weeks, or months, or years, or a lifetime - found what was left of him there...
This ShukerNature exclusive was an excerpt from Creatures of Shadow and Night, written by Dr Karl Shuker and illustrated by Andy Paciorek, which will be published by Coachwhip Publications (Landisville).