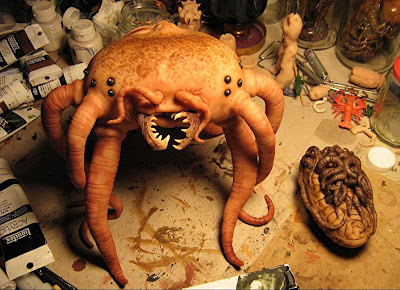 Beasty and various other creations of Andrew Scott


One of the chief delights for me in joining Facebook has been meeting and becoming friends with so many interesting people – some of whom, moreover, are gifted with the most extraordinary and wonderful talents. One such person is Andrew Scott from Vancouver in British Columbia, Canada, whose ability to manufacture astonishingly life-like models of real and imaginary animals is truly breathtaking. Using acrylic on PVC gel and iron wire or copper and aluminium for many of them, each of his numerous sculptures has been skilfully created by him with meticulous attention to detail, and the result is never less than mesmerising.

Now, with Andrew's kind permission, I am delighted to be able to present here an exclusive ShukerNature showcase of his spectacular work – a unique imaginarium of wonders, marvels, and terrors the likes of which you will never have seen before nor are likely ever to see again. So sit back, eyes at the ready, and prepare to be amazed!

Needless to say, as a cryptozoologist I am particularly fascinated by Andrew's eclectic assortment of mystery and imaginary beasts – a wholly original museum of unnatural history, in fact, whose specimens' decidedly strange, even alienesque features are guaranteed to delight and disturb in equal measure!

One of my personal favourites from Andrew's menagerie of crypto-models is his Zeuglodon – an evolved, present-day version of which is a popular identity among cryptozoologists for various elongate lake and sea monsters.

Another crypto-celebrity produced in model form by Andrew, utilising acrylic and foam rubber, is the giant squid. 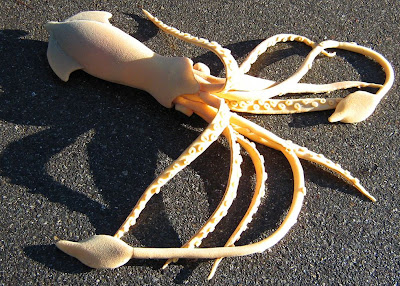 Andrew has yet to prepare a Mongolian death worm (though he has plans to do so), but he has already produced something comparable, which he refers to as a Sand Worm. As can be seen here, it is armed with a cluster of tentacles at its anterior end, plus a triangle of tiny ocelli (eye-spots) on top of its head and an additional pair sited laterally. It is this minute degree of detail present in all of Andrew's works that I find so captivating, from both a purely aesthetic and a strictly scientific viewpoint. 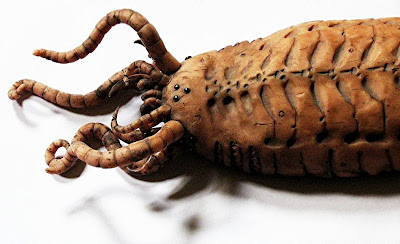 Andrew's Chupacabra is not for the faint-hearted. A terrifying bristle-backed biped armed with formidable talons and sizeable fangs, there is no doubt that this green-skinned, hunch-backed horror would strike fear into the heart of anything that it encountered, and provide years of nightmares for anything that survived such an encounter. 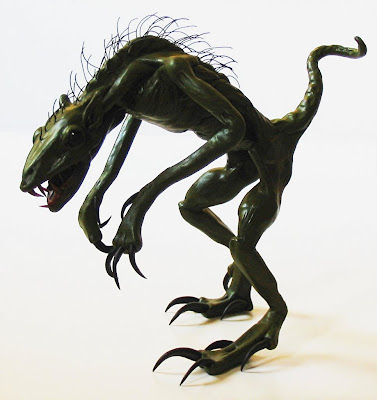 And speaking of nightmares...

Warning: This section contains slimy tentacles – lots of them!!

It is perhaps with Nature's nightmarish side that Andrew really comes into his own, permitting his imagination to wander down the darker paths and byways of evolution to conjure forth an array of overtly bizarre and sometimes physically shocking life-forms, yet invariably executed with exemplary showmanship flair and expert structural insight.

Take, for instance, the Swamp Critter. Dramatically dissimilar from anything within Earth's catalogue of known, modern-day organisms, it vaguely resembles something called into being from the archaic Burgess Shale ecosystem present at the onset of life on our planet. However, it is even stranger and decidedly more sinister – thanks in no small way to that conspicuously large, sharp-looking claw at the tip of its elongated body, its plethora of vermiform tentacles, and the unnerving ability of its anterior body portion to rear upwards, rather like a cobra about to strike. 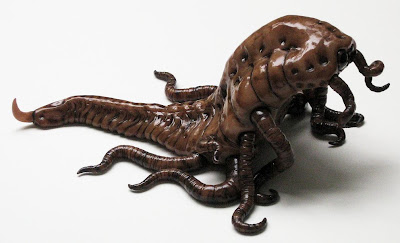 No less settling to the mind is what Andrew terms the Baby Deep One, because this is his concept of what H.P. Lovecraft's Deep Ones looked like as infants. Dorsally, it resembles a curled, gelatinous larva with little in the way of distinguishing features other than three short projections borne upon what appears to be this bizarre entity's neck region, and a pattern of short ridges running down its back. Turn it over, however, and you are met with a writhing mass of slimy tentacles, resembling a host of twisting, intertwined worms coated in glistening mucus. As with all of Andrew's sculptures, the technical accomplishment is dazzling – even the creature's slime looks ready to drip off its tentacles at any moment. 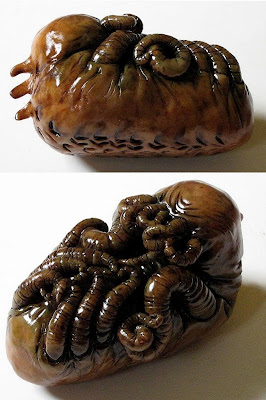 Click here to discover how Baby Deep One was created by Andrew.

Yet another of Andrew's beasts supplied with a plenitude of tentacles is the Crawler. Dorsally, its crenulated external surface recalls that of a woodlouse, but ventrally its tentacles betray a very different zoological identity and origin. 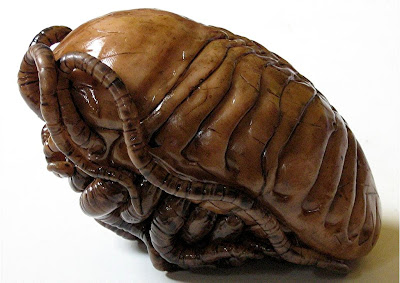 Ocelli and tentacles are trademarks of Andrew's zoological design, and both figure extensively in Beasty, together with a vicious-looking pair of lateral jaws. 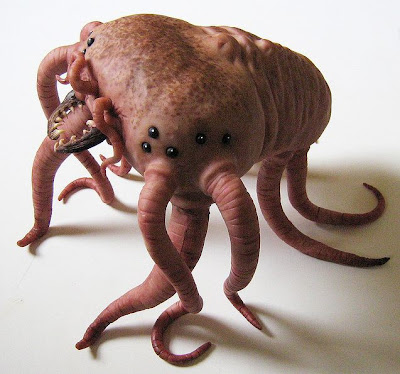 Even more impressive, however, are the huge jaws of the Crazy Critter (in reality a purchased pair of genuine wolf-eel jaws), which otherwise resembles a centipede, but with tentacles instead of legs. 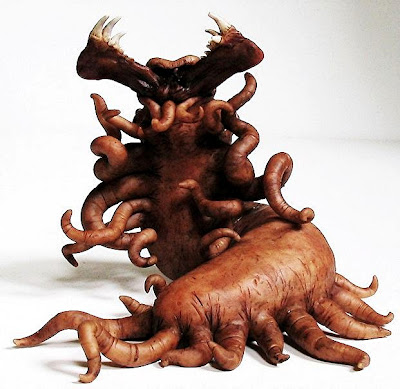 In the Sand Creature, the ocelli have been replaced by fully-fledged eyes, and the tentacles are arranged in lateral clumps. 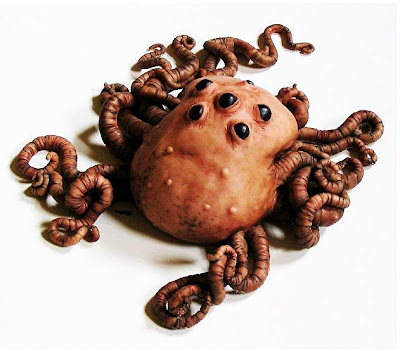 As for Baby: well, it has certainly never been more true that only a mother could love it! Armed with Andrew's customary abundance of tentacles, a jutting lower jaw brimming with teeth, and a long tail, this globular grotesque is definitely NOT pretty in pink (but readily emphasises the sick in cyclamen), and calls to mind a cryptozoological Eraserhead. In fact, Baby was indeed designed by Andrew specifically for a horror film, but sadly the film was never completed. 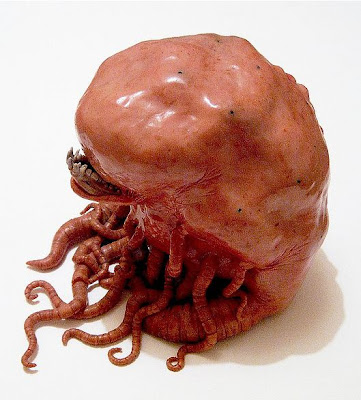 Remember those disgusting little wingless insects known as silverfish that sometimes turn up in fire grates, kitchens, or bathrooms? Imagine if one of them mutated, growing larger in size, turning a lurid pink in colour, and seeking out a more intimate dwelling place – the human brain? If that pleasant little thought hasn't already given you nightmares, here's Andrew's brainworm! 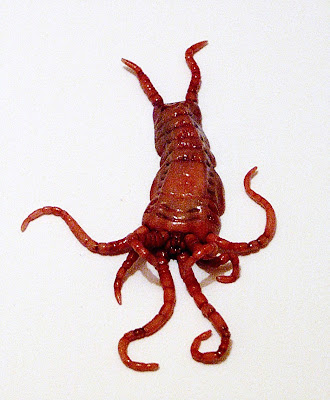 And don't even get me started on his Triloslug and his Martian Maggot – the latter is clearly one for the exobiologists. 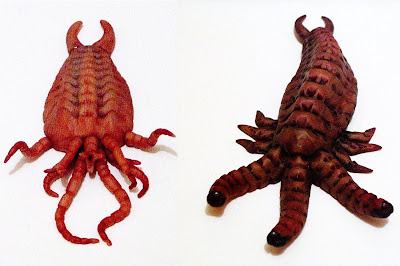 Two more weirdly wonderful creations designed as ever with Andrew's painstaking care and precision – as is the wonderfully-named Sea Pineapple of Death.

This vaguely squid-like marine organism with a pineapple-redolent body sports a ring of eyes encircling its head, and two threesomes of tentacles - one set long, the other set short.

Not all of Andrew's creations are of Earth origin, as exemplified not only by his Martian Maggot but also by his Alien Embryo. 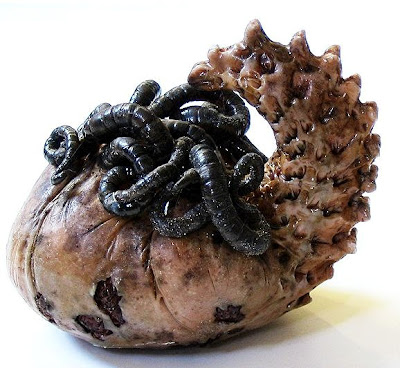 Tentacles, as ever, are liberally supplied, but it is difficult to speculate what this entity may ultimately become – which is perhaps no bad thing, especially for those of a nervous disposition!


AN INORDINATE FONDNESS FOR BEETLES

British geneticist Prof. J.B.S. Haldane is best-remembered outside genetics for his oft-quoted reply when once asked what inferences could be drawn about the nature of God from a study of His works: "An inordinate fondness for beetles". 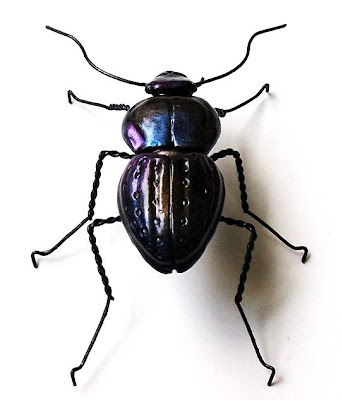 A study of Andrew's models would suggest that he shares a similar degree of fondness for such insects, as his collection includes a wide range of beetles. 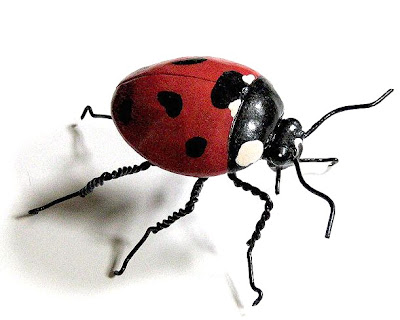 Furthermore, so true to life are they that had I not already known them to be models, looking at their pictures I would have assumed that I was viewing examples of macro-photography featuring bona fide beetles. 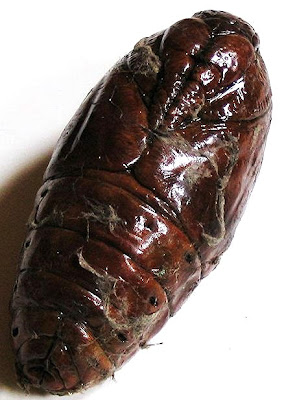 Similarly, the exceptional degree of verisimilitude exhibited by this model makes it very easy to forget that this really is 'just' a sculpture and not a genuine earwig, ready to scuttle away at any moment. 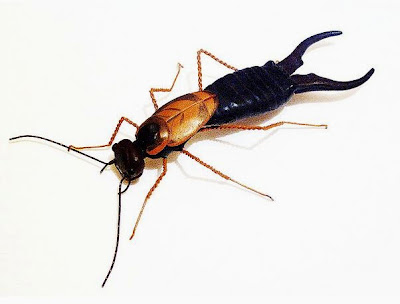 Andrew also has a passion for trilobites, and again he has produced models of several different types. The following example, belonging to the species Bristolia bristolensis, is particularly eyecatching. 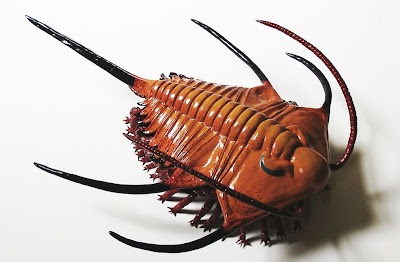 
As varied and as numerous as they are, the examples presented here are just a small selection of Andrew's prodigious output of models and sculptures, which readily convey the vast scope, expertise, and inventiveness of the mind and imagination that created them. One of his models drew a comment from a viewer who compared Andrew to the celebrated Dutch artist Hieronymus Bosch (c.1450-1516) – famed for his extraordinary triptych painting 'The Garden of Earthly Delights', which is filled with fantastic figures and beasts. 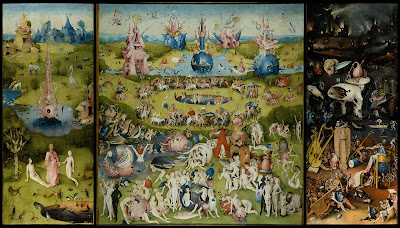 To my mind, this is a valid comparison, because Andrew's creations demonstrate a breadth and depth of vision so profound and proliferate that just as Dr Bernard Heuvelmans was called the Sherlock Holmes of cryptozoology, it would be no exaggeration to call Andrew Scott the Hieronymus Bosch of (un)natural history.


Andrew recently mentioned to me that he will be attempting a model of the Mongolian death worm, a cryptid famed for its alleged powers of electrocution. Consequently, I now await this with keen delight, albeit with a degree of trepidation too. For if Andrew's death worm is (as it surely will be) as realistic as all of his other animal models, it may prove to be a shocking experience – in every sense! 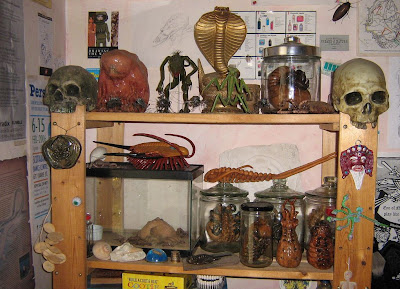 Andrew's study, showing some of his many creations

IMPORTANT: The copyright of all photographs included in this ShukerNature blog post belong to Andrew Scott, and these photographs must not be reproduced without his written permission.
Posted by Dr Karl Shuker at 03:01