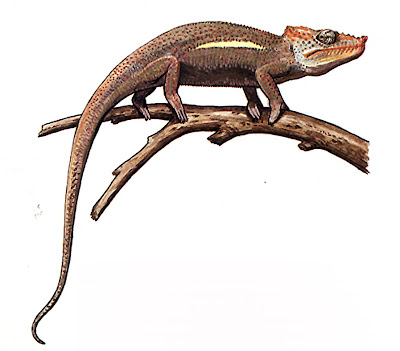 
To the chagrin of cryptozoologists and the delight of their critics, the conclusive identification of a longstanding mystery beast is not a common occurrence. That is why I have particular pleasure in presenting herewith one such revelation that I was personally able to achieve.

As documented in his Travel Diaries of a Naturalist, Volume One (1983), on 25 February 1962, during a visit to Africa, world-renowned conservationist and naturalist Sir Peter Scott, had set off for Tanzania's Serengeti Plains with companions John and Jane Hunter from their home at Oldeani. They had reached the Ngorongoro Conservation Authority Area when they spied a large, unfamiliar-looking chameleon, crossing the road just beyond the Area's entrance.

Somewhat elongate in shape with a very lengthy tail, and a tiny horn at the tip of its snout, this mysterious lizard - probably a male and later nicknamed the Oldeani Monster - was brown in basic colour, with small red spots and a distinctive horizontal stripe running across the center of each flank. 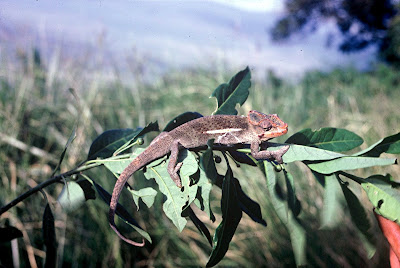 Scott was so intrigued that he picked up this 'monster' - which promptly attempted to bite him! Undeterred, he took it back home with him when he returned to England, where it lived for 18 months at his famous Wildfowl Trust (now the Wildfowl & Wetlands Trust) at Slimbridge in Gloucestershire. When it died, its body was preserved and Scott referred it to several herpetological experts in the hope of identifying its species - but no-one could offer a satisfactory answer.

One authority suggested that it may actually be a female, not a male, and related to Chamaeleo [now Trioceros] jacksonii merumontanus - a subspecies of Jackson's distinctly dragonesque three-horned chameleon confined solely to Tanzania's Mount Meru. 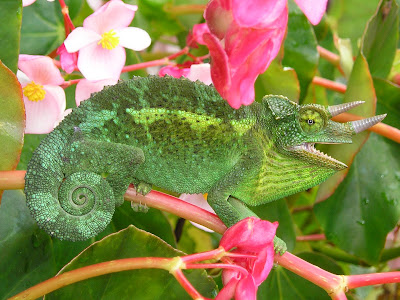 Another expert considered the possibility that it was a juvenile of an extremely sizeable species called Meller's chameleon C. [now T.] melleri (mainland Africa's largest species of chameleon), but this was later disproved. 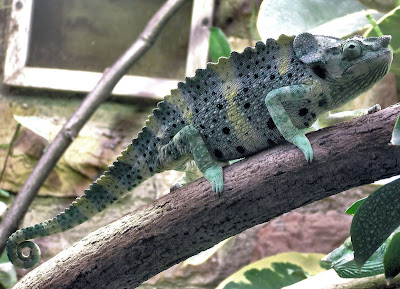 Scott himself was inclined to believe that it belonged to a hitherto-undescribed species, and even proposed 'Chamaeleo oldeanii' as a suitable name.

Tragically, however, the bottle containing the earthly remains of the obscure Oldeani Monster was eventually lost, possibly destroyed inadvertently. Consequently, it seemed as if the mystery of its identity could never now be solved.

At the beginning of 1991, however, after reading Scott's diary account of it and viewing his accompanying painting (see this ShukerNature blog post's opening illustration), I became very interested in the Oldeani Monster. So I set about seeking an answer to this longstanding riddle myself. 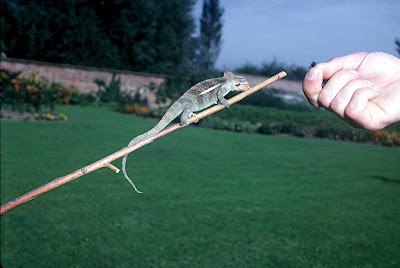 First of all, I sent details of its history to herpetologist Colin McCarthy at London's Natural History Museum. In response, I learnt from him that the expert who had nominated C. [now T.] jacksonii merumontanus as a likely identity for this specimen was chameleon specialist Dr Dick Hillenius, at Amsterdam University's Institute For Taxonomic Zoology, who had seen some colour transparencies of the Oldeani Monster sent by Scott to the Natural History Museum in April 1983.

I then contacted Scott's widow, Lady Philippa Scott, who confirmed that the Oldeani Monster's remains had never been found again, but she did have some colour transparencies of it (copies of which she kindly made available to me for credited inclusion in any of my publications). She also commented that it had seemed very similar to the two-banded chameleon C. [now T.] bitaeniatus. 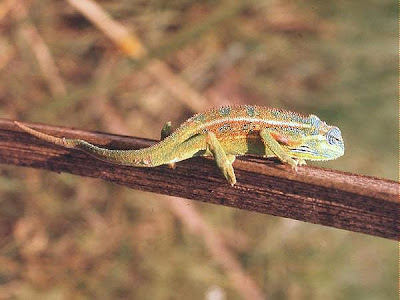 In November 1991, after reading a cryptozoological article by him in the periodical Tier und Museum, I wrote to German herpetologist Dr Wolfgang Böhme, who has a great interest in mystery reptiles. Indeed, he is famous for unveiling a hitherto-unknown species of monitor lizard, now known as the Yemen monitor Varanus yemenensis, while in the comfort of his own home! Viewing a TV documentary concerning Yemen one evening in 1985, he spotted a strange-looking monitor in it - his subsequent investigations confirmed that its species was totally new to science. (See my book The Encyclopaedia of New and Rediscovered Animals, 2012, for full details regarding this remarkable herpetological find.)

And now, after reading my letter (which also contained copies of Lady Scott's transparencies), the mystery of the Oldeani Monster was a mystery no longer either. Dr Böhme recognized its species immediately, naming it as Bradypodion uthmoelleri – known variously as Müller's leaf chameleon and the Hanang hornless chameleon. Moreover, in an issue of the weekly journal Salamandra (15 December 1990), he had actually published a paper dealing with this latter lizard. It is an exceedingly rare species, which was formally described by science in 1938, but as recently as 1990 was known from just three specimens - the latest of these constituting the first recorded female, collected from the Ngorongoro crater. 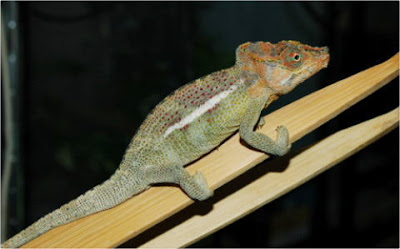 After almost three decades, the remains of the Oldeani monster could at last rest in peace - wherever they are.

About a year ago, an unexpected but very pleasant postscript to this interesting history occurred, when, while browsing at a book fair, I came upon a copy of a book by Lady Scott that I hadn't seen before. Published in 2002, it was entitled So Many Sunlit Hours, and recalled many of the adventures that she had shared over the years with her husband, travelling the world in search of rare and exotic species to film, paint, and assist in conserving for future generations. 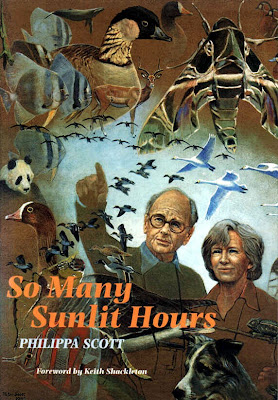 So Many Sunlit Hours

Opening it, I was surprised but delighted to find that it was personally signed by her, and so I purchased it without delay. Later, reading through a chapter documenting their sojourns through Africa, I was even more surprised and delighted, as well as very honoured, to discover the following paragraph:

"The chameleon that we had caught above the crater turned out to be extremely interesting. We named it the 'Oldeani Monster' after the area where it was found. It was not as easily tamed and handled as the other two species we had – Ch jackson [sic] and Ch bitaeniatus – hence the additional name 'Monster'. Some years later, thanks to the excellent painting of it in Peter's diary, it was recognised by Dr Schukker [sic] as the rare Bradypodion uthmoelleri."

Sadly, Lady Scott had died in January 2010, at least 18 months before I had happened upon her book, so I never had the opportunity to thank her for her kind acknowledgement of my investigations – until now. Thank you so much, I am truly grateful and very pleased that I was able to shed some light upon the longstanding mystery of your fascinating little Monster's zoological identity.

I also wish to offer my sincere thanks to Lady Scott for so kindly granting me her permission in perpetuity to reproduce in suitably credited form the three Oldeani Monster illustrations supplied to me by her and included in this present ShukerNature blog post.

Incidentally, in 2006 the Oldeani Monster's species was transferred to a newly-created genus, Kinyongia, so its taxonomic name is now Kinyongia uthmoelleri. Since its rediscovery, moreover, via the Oldeani Monster, this species has been maintained and bred in captivity, so its survival now seems much more assured.


This ShukerNature blog post is an expanded, updated version of a section from my book From Flying Toads To Snakes With Wings (Llewellyn: St Paul, 1997).