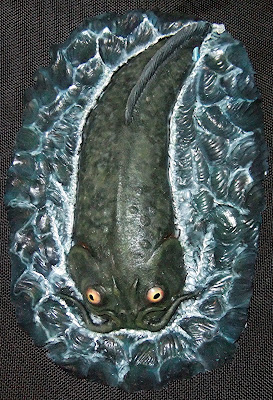 
I am greatly indebted to Swedish cryptozoological artist/sculptor/film-maker Richard Svensson for bringing this hitherto little-reported lake monster to my attention, and also for so kindly presenting me with his wonderful model of it, depicted above.

Lake Myllesjön is situated in Richard's home province of Blekinge, in southernmost Sweden, and since at least the middle of the 19th Century reports have been circulating of a piscean monster inhabiting its cool waters, which is popularly referred to as the whale-fish. A flurry of sightings occurred during the 1920s and 1930s. One eyewitness, while riding by the lake on his bike, saw what he initially thought to be a massive log - until the water surrounding it began to churn, and the 'log' abruptly dived out of sight. Another observer claimed to have seen a huge fin-crested back rise above the surface, and considered it to be an immense pike, but no-one else supported this identity. Pike or not, local fisherman Sven Johan discovered two of his fishing nets ripped apart after hauling them out of the lake, and yet another man stated that he had seen a whale-like beast frolicking at the water's edge.

These and other sightings encouraged local talk about attempting to capture the monster, and after three girls fled from the lake, screaming in terror, after supposedly spying an animal resembling a whale basking in shallow water near the shore, an official plan of action was drawn up and set in motion. As Richard revealed in his account that he sent to me:

"The local blacksmith made a hook the size of a ping-pong bat, a piece of board was made as a float, and a steel wire chosen as line and tied around a slim oak tree. A butcher donated a dead piglet for bait, and the entire contraption was hurled out into the lake. The next day the oak tree was found uprooted, bobbing about in the middle of the lake, where it stayed for a whole week until it sank. Nothing more happened and the monster was believed to be dead."

Until August 1962, that is, when sightings of 'logs' splashing in the lake gained attention all over again. This time, the local response was to unleash a veritable hunting party in the monster's wake, consisting of 425 fishermen - each one competing against all of the others not only for the honour of procuring (and thence himself becoming) a living legend, but also for the financial recompense of 1000 Swedish kroner. Perhaps, however, it was a case of too many anglers spoiling the lake, because the biggest fish caught was a 2.9-lb perch.

"In November 1962, several large hooks were manufactured and baited with dead chickens and calves' heads. Most newspaper stories say that the efforts went resultless, but others claim that at least one of the calves' heads disappeared. During 1963, the diving log was seen again, and in September another fishing competition was held: now with the prize of 10,000 Swedish kroner. Again, it proved to be an uneventful event."

Nevertheless, Richard knows of reports concerning Lake Myllesjön's mystifying whale-fish from as late as the 1970s. However, he fears that it may have since become an unsuspected victim of modern-day urbanisation. In 1996, he visited its watery domain, and discovered to his horror that a two-lane motorway had been constructed right next to the lake, and that the few houses still nearby are themselves newly-built, with their owners having little or no knowledge of the monster.

Richard has learnt of one other lake that was once said to harbour something similar to the Myllesjön whale-fish, but he now considers it likely (as do I) that both of these unidentified water beasts were specimens of Siluris glanis, commonly known as the wels or European giant catfish. According to Richard, the largest confirmed specimen ever caught in Sweden, in 1871, measured 3.6 m (11.8 ft) long. Moreover, the largest claimed specimen of all was a true monster of a fish, allegedly measuring 15 ft, which was caught in Russia's Dneiper River during the 1850s, but there is no physical validation for its size. Tragically, the same is true for the very existence of Lake Myllesjön's enigmatic whale-fish - gone if no longer forgotten. 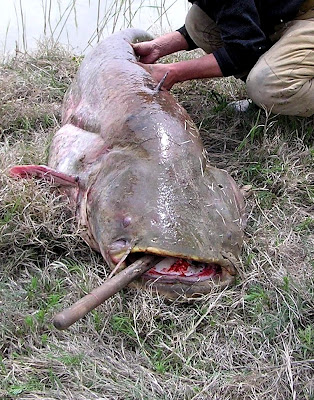 This post is excerpted from my book Mysteries of Planet Earth: An Encyclopedia of the Inexplicable (Carlton Books: London, 1999).
Posted by Dr Karl Shuker at 20:49