IN QUEST OF THE KUIL KAAX 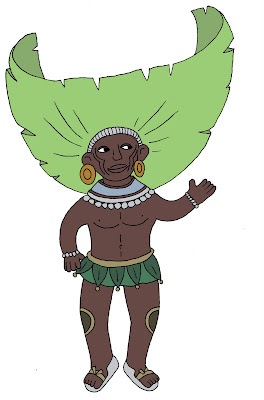 A kuil kaax (Tim Morris)
Continuing yesterday's Little People theme, several different versions have been reported from Mexico. Two of these - namely, those mysterious dwarf-sized humanoids known as the alux, long reported from the Yucatan Peninsula; and the thumb-lacking, sombrero-wearing, gnome-like duende or dwendi - are well documented in the cryptozoological and mythological literature. In stark contrast, a third Mexican mini-human entity, known as the kuil kaax, rates scarcely a mention.

I first learnt of the kuil kaax many years ago, when reading a traditional Mexican folktale concerning the basilisk lizard. According to the tale, the kuil kaaxs existed when the world was still young, were nature spirits of the forests that resembled little old gnome-like or dwarfish men, and – recalling duende descriptions - wore huge sombreros made out of leaves from the banana palm. Kind and gentle, the kuil kaaxs were revered almost as demi-gods by the animals of the forest.

This description (sombreros excepted!) closely corresponds with reports of diminutive humanoids reported widely across the Americas in modern times. Yet, bizarrely, the kuil kaax has received so little formal attention that even a Google search by me failed to elicit more than a brief note within the following Russian website:
http://www.mesoamerica.ru/indians/maya/dwarfs.html
dealing with Mesoamerican dwarf deities.

So if anyone out there has any additional information concerning the kuil kaax, I’d love to hear from you.
Posted by Dr Karl Shuker at 02:02