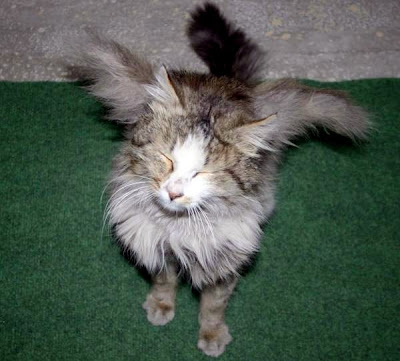 On 22 February 2010, I posted a Turkish report of a winged cat from Tunceli, one of two Turkish winged cat reports dating from mid-2008. Recently, Richard Muirhead kindly brought to my attention a good-quality Swedish news report video featuring the Tunceli specimen, which I had not seen before (prior to this, I had only seen two relatively poor-quality videos of the cat, whose urls can be found in the comments section of my 22 Feb 2010 blog).

Consequently, I now have pleasure in presenting the url of this better, Swedish video, which was first uploaded by Webb-TV on 7 May 2008, and is entitled 'Kolla, katten har vingar!' ['Check this out, this cat has wings!']:

Swedish artist Richard Svensson has translated this video's Swedish narration for me as follows, and so too, on my Facebook page, has Danish zoologist Lars Thomas - thanks guys!

"It’s got both fur and a ”meow”, but there is something weird about this kitty. It’s got wings. A woman first found the cat on her stairs, in the Turkish city of Tunceli. When the woman saw the wings on the cat, she got so startled she started to scream. The cat was scared off, but continued to prowl around the area, until a family decided to give the odd animal a permanent home. The cat seems to be enjoying itself, lapping up the milk. It’s inquisitive and cuddly, but, like most cats, also a bit untrustworthy [at this point in the video, the cat takes a bite at its owner!]. It’s not the first time someone’s discovered a winged cat. The media has, for example, reported about a winged cat from China. The curious affliction can be the result of many things, like deformed limbs, outstretched skin, and matted fur."

For the most comprehensive coverage of winged cats ever produced, see the chapter on this subject in my book Dr Shuker's Casebook (CFZ Press: Bideford, 2008). 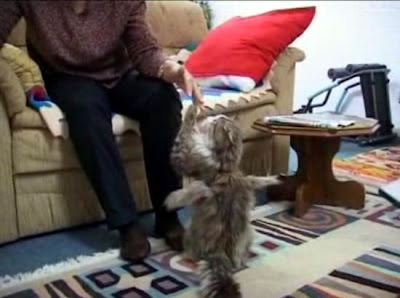 Rear view of Tunceli winged cat, showing its wings outstretched at right angles to its back
Posted by Dr Karl Shuker at 20:35