HOW I LOST A LEOPON, THEN FOUND IT AGAIN - TWICE! 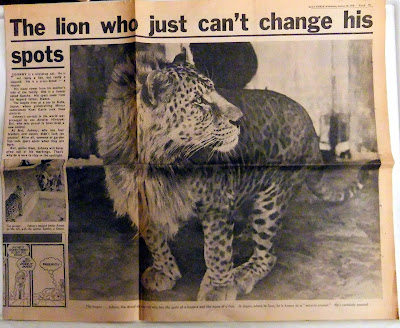 The leopon article from the 28 January 1970 issue of London's Daily Mirror newspaper that I rediscovered by chance(?) at Hay on Wye in the year 2000

It’s often been said that there is no such thing in life as coincidence, and some of my own experiences certainly support this claim. The following example is a case in point.

I mentioned in a previous ShukerNature blog post, re the reverse mermaid (click http://karlshuker.blogspot.com/2011/03/rene-magritte-and-reverse-mermaid-very.html), that even as a child I’d snip articles and reports on strange animals from newspapers and then paste them into a series of large scrapbooks, which were the humble foundation of what in later years would become my cryptozoological archives.

When I was around 10 years old, at the onset of the 1970s, I well remember seeing in one newspaper a very large two-page spread about a truly extraordinary big cat known as a leopon, which proved to be a male hybrid of a leopard and a lioness that had been born in a Japanese zoo. The spread was dominated by a wonderful photograph of this astonishing animal, revealing that its sturdy body was leonine in form but was extensively patterned all over with leopard-like rosettes, and its leopardine head was encircled with a thick lion-like mane. Clearly, it was indeed a crossbreed of these two great cat species, and as I previously hadn’t even suspected that they could successfully hybridise and produce viable offspring, let alone seen photos of any, I was completely captivated by this article and in particular by its amazing photograph.

Consequently, even today, over 40 years later, I still cannot comprehend why on earth I didn’t retain the article and paste it without delay into one of my scrapbooks. Yet for some completely unknown reason, I didn’t. Instead, rather like a dream in dawn’s first light, it somehow slipped away from me and was gone, lost forever from my life, it seemed, but never forgotten.

It was now 1988, and I was earnestly preparing the manuscript of my very first book, Mystery Cats of the World, for publication the following year. It included a section on leopons in relation to my coverage of an African crypto-cat known as the marozi or spotted lion, which some investigators have speculated (albeit very implausibly) may be naturally-occurring lion x leopard hybrids. Back in those pre-internet days, information on such esoteric creatures was very difficult to trace, and on more than one occasion while writing my leopon section I cursed myself for not having retained that informative newspaper article from my childhood. Then again, I mused, perhaps it might be possible to obtain a copy of it after all. Thinking back, I reflected that the article must have been published in or around 1969 or 1970, and of the various newspapers that my family read at that time, the most likely one in which it would have appeared, based upon its layout and style as I recalled, would have been London’s Daily Mirror. 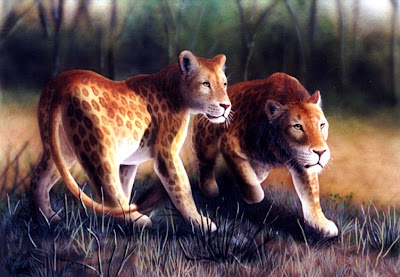 Armed with these admittedly sparse details, I wrote to the archive department of the Mirror, and asked if there was any chance that they could trace the leopon article and sell a photocopy of it to me for research purposes in relation to my book. I certainly didn’t have high expectations of obtaining any result, but a few weeks later a large flat envelope arrived, and there inside was an A3-sized photocopy of the leopon article! It was dated 28 January 1970, occupied pages 12 and 13, and was entitled ‘The lion who just can’t change his spots’.

Gazing at it again after almost 20 years, I was thoroughly amazed, but delighted. The photo, by globetrotting Mirror cameraman Kent Gavin, was exactly as I’d pictured it in my mind’s eye, and there was also a second, much smaller one, showing the leopon’s leopard father, Kaneo, and his lioness mother, Sonoko, together. Reading the article’s text revealed that the leopon himself – the extremely exotic-looking subject of the main photo - was called Johnny, who lived with his parents and four siblings at a zoo in Kobe. Needless to say, I lost no time in writing a very grateful letter of thanks to the Mirror archivist who’d successfully uncovered the much-prized article for me, and I also made sure that this time it was placed safely on file – after which I naturally assumed that this was the end of the lengthy saga of the discarded leopon article.

In fact, I couldn’t have been more wrong, because by far the most extraordinary episode was still to occur.

Eleven years had now passed since my mystery cats book had been published to great acclaim in June 1989, and, as is so often the case with me on sunny Saturday afternoons in the spring and summertime, I found myself on that very eventful day in question at Hay On Wye. Situated on the English-Welsh border, this is the so-called ‘Town of Books’ that is famous worldwide for housing within its modest-sized borders around 30 different second-hand bookshops.

One of my favourites is C. Arden - The Natural History Bookshop (see my photo of it below), which contains a veritable treasure trove of wildlife books on every conceivable field of natural – and unnatural – history. Outside, there is a bookcase (arrowed in photo) often containing bargains and sell-off volumes, usually priced at no more than a pound or so each, which are generally arranged very haphazardly, due to the considerable number of browsers who sift through them in search of a find. 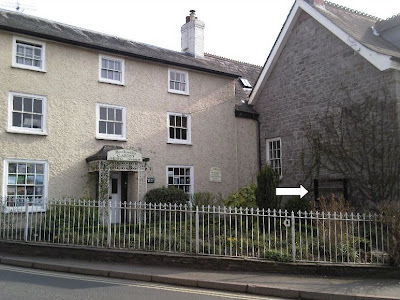 For reasons that I simply cannot even begin to understand, despite being confronted by shelf after shelf of enticing titles my gaze was instead drawn to a large creamy-white nondescript-looking volume sticking out a little near the bottom of a pile of books on a shelf close to the ground on the right-hand side of this bookcase. I couldn’t see its title, and, indeed, could scarcely even see the book itself, so why should I have even given it a second glance, let alone felt compelled to pull it out from under the weight of books piled on top of it? And yet, inexplicably, I did.

And once I was holding it, I noticed that there was something sandwiched between two of its pages, something that looked like a folded sheet from a newspaper. Taking it out, I carefully unfolded it, and then, if anyone had been standing nearby, they might well have heard a mighty clang – the sound of my jaw crashing to the floor, as my eyes struggled to accept what they were looking at.

There, in my visibly trembling hands, were pages 12 and 13 from the Daily Mirror for 28 January 1970 – ‘The lion who just can’t change his spots’!! As seen in this article's opening photograph of them, the pages were a little brown – they were, after all, just over 30 years old – but I scarcely even noticed that. All I could see was Johnny the Japanese leopon’s photo staring back at me! 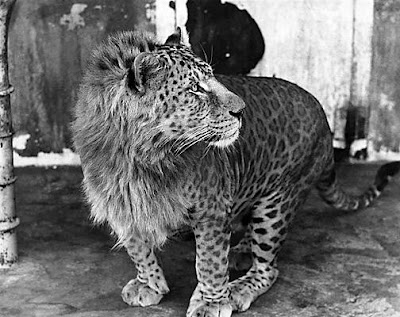 Apparently, there is a one in 14 million probability of winning the jackpot in the UK National Lottery. But what is the probability of my opening a book selected seemingly at random in a town over 80 miles away from my home and packed with countless thousands of other books, only to find inside it a copy of the exact same newspaper article that I had thrown away 30 years earlier and had wished with all my heart ever since that I hadn’t? It must be so minuscule as to be virtually incalculable, and yet, somehow, incredibly, I’d done it!

I hardly need state that I immediately went inside the shop, paid my pound for the book, and came out again, still quaking in shock, with its precious newspaper article tucked back safely inside its pages. And as soon as I arrived back home, I took the article out, placed it inside a transparent plastic A4 packet, and filed it away in the appropriate place within my archives, where it remains to this day - except when, every so often, I take it out again, gently unfold its slightly brittle pages, and gaze with a mixture of awe and rapt reverence at its fondly-remembered photograph of Johnny the Japanese leopon. Ironically, I can’t even remember what the book was in which I’d found this newspaper article, or even what happened to it afterwards – I suspect that it was given away to a charity shop with various other surplus books of mine when I had one of my periodic weeding-out sessions.

Some writers and readers fervently believe in the existence of a library angel - a supernatural force or entity that helps them to locate a certain book (or other publication) if their need to find it is sufficiently compelling. So was I guided by divine intervention to locate a copy of my long-lost leopon article? If that seems unlikely, how much likelier is it that I could have found it in the way that I did simply by random chance? 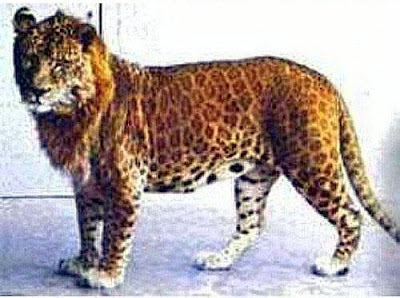